EU Begins Legal Action Against Hungary Over its Anti-LGBTQ Law

Participants gather near the parliament building in Budapest on June 14, 2021, during a demonstration against the Hungarian government's draft bill seeking to ban the "promotion" of homosexuality and sex changes. The move was swiftly denounced by Amnesty International, Budapest Pride and three other rights groups, who compared the Fidesz party proposals to a similar law in Russia which punished acts of homosexual "propaganda" aimed at young people.
Gergely Besenyei—AFP/Getty Images)
By Katharina Rosskopf and Nikos Chrysoloras / Bloomberg

The European Commission will begin legal proceedings against Hungary over a controversial law curtailing LGBTQ content, in the latest spat between Brussels and Prime Minister Viktor Orban’s government.

“The Hungarian bill is a shame,” Commission President Ursula Von der Leyen told reporters in Brussels on Wednesday. “I will use all the powers of the commission to ensure that the rights of all EU citizens are guaranteed, whoever you are and wherever you live.”

Hungary’s Parliament approved last week legislation outlawing content for children that can be deemed to “promote homosexuality.” The bill, which pairs homosexuality with pedophilia, builds on previous legislation adopted in Hungary last year, including putting an effective ban on adoption by same-sex partners and enshrining in the constitution that marriage is possible only between a man and a woman.

The legislation has provoked a furious reaction in Brussels and in Western European capitals. On Tuesday, 13 EU governments issued a joint declaration condemning it, as it “represents a flagrant form of discrimination based on sexual orientation, gender identity and expression.”

While Wednesday’s expected action from the European Commission is just the start of long-drawn legal proceedings that will have no immediate impact on Hungary, the move adds to signs that the Commission will take a tough stance when assessing whether the alleged descent of Hungary and Poland toward authoritarianism presents a risk for EU funds.

Later this year, the EU’s executive arm may propose the freezing of payments from the bloc’s jointly financed stimulus program and common budget toward the two countries governed by hard right populist parties. The proposal, which would need the backing of a weighted majority of European governments, could mean that billions of euros in EU funds could be withheld over the lack of democratic checks and balances to ensure they will not be misappropriated. 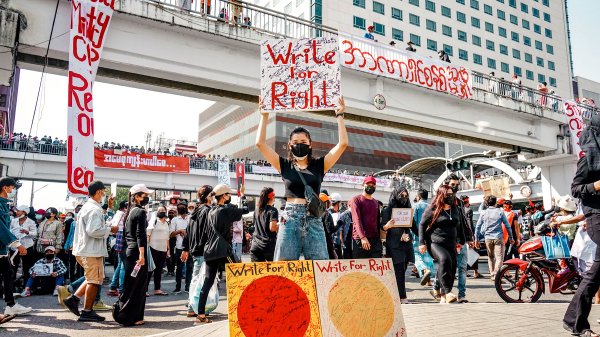