A rift in the American Catholic Church widened in June, as U.S. bishops voted to draft instructions to the faithful on who should receive Communion, with an eye toward dissuading high-profile Catholics like Joe Biden who support abortion policies and gay rights from presenting themselves for the ritual.

Caught in the middle, Biden has no plans to change how he worships. How the President practices his faith is “personal,” White House Press Secretary Jen Psaki said in response to a question from TIME on June 21. “It is something that has helped guide him through some challenging moments in his life and that’s how many Americans see their faith as well, not through a political prism,” Psaki said. “So I would suspect he would continue to attend church as he has for many, many years.”

President Biden has turned to his Catholic faith for daily solace, close friends say, as well as during tragic moments in his life, like the deaths of his first wife Neilia and daughter Naomi in a car crash in 1972 and the passing of his son Beau from a brain tumor in 2015. In many ways, Biden represents the culmination of decades of increased representation of Catholics in the American political arena, going back to the election of the country’s first Catholic president John F. Kennedy in 1960. Six of nine Supreme Court Justices are Catholic, as is the Speaker of the House, and multiple Cabinet secretaries and senior officials. Catholic voters cast one-fifth of the votes in the 2020 election, and about half of them voted for Biden.

But Biden’s presidency comes as the church is struggling internally over how to navigate the role of the spiritual in the political sphere, and his election has amplified tensions at the highest levels of the Catholic Church. Within days of Biden winning the White House, 10 of the nation’s most powerful bishops decided to launch a “working group” on how to approach a Catholic President like Joe Biden. The panel met twice over Zoom in December and January and discussed how to respond to Biden’s policies that conflict with Catholic teaching and how to minister to Biden’s soul.

This week, the bishops went further. During a long-scheduled assembly over video calls on June 17, the U.S. bishops voted to draft a “teaching document on the beauty and power of the Eucharist,” José H. Gomez of Los Angeles, president of the U.S. Conference of Catholic Bishops, said in a statement. According to a church official, many bishops were concerned about the confusion that could be caused among Catholics when prominent politicians support abortion policies and continue to take Communion. Catholic teaching instructs that during the Eucharist, a mystery occurs and the bread and wine literally become the body and blood of Jesus, bringing the worshipper in the presence of Christ.

Some prominent church leaders have long wanted to renew the power of the rite among the faithful. The bishops drafting the document are planning to hold more than a dozen meetings around the U.S. over the next few months. When the U.S. bishops gather for another assembly in Baltimore in November, the document will be discussed and bishops will vote on its release. The bishops want the paper to clarify the purpose of Communion for Catholic laypeople and priests and call for “consistency” when worshippers present themselves for the rite, Bishop Kevin Rhoades from Fort Wayne-South Bend, Indiana, who is leading the writing of the document, said in an interview with Our Sunday Visitor, a Roman Catholic publication.

The vote is another example of the American Catholic Church moving on a more conservative and political path, says Massimo Faggioli, a theology professor at Villanova University and author of Joe Biden and Catholicism in the United States. The U.S. Conference of Catholic Bishops has become “beholden to the political agenda of the Republican Party, which has become really the identity of the U.S. Catholic bishops for so many Catholics in the United States,” Faggioli says. The fact that half of American Catholic voters backed Biden shows that many in the church are open to policies that embrace gay rights and access to abortion, even if those policies go against church doctrine or their own personal beliefs. Biden also campaigned on several issues the church embraces, such as aiding refugees, advancing racial justice, ending the death penalty and addressing climate change. Some church observers are concerned that the bishops’ hardline approach to Biden is a symptom of an approach to the faith that could further alienate American Catholics at a time when congregations are shrinking.

The move also cuts against a tone of openness set by Pope Francis when he became pontiff eight years ago and sought to emphasize ways to be more welcoming of divergent views within the Church. Pope Francis has repeatedly shown his openness to Biden in closely choreographed moves seen as signaling a desire for dialogue and engagement. Francis clashed publicly with former President Donald Trump over racism and immigration. Francis was quick to call and congratulate Biden when the results showed he had won the election in November and asked Washington’s Cardinal Wilton Gregory to bring Biden a signed copy of his book, Let Us Dream. In May, a close advisor to Francis, Cardinal Luis Ladaria, sent the U.S. bishops a letter warning them that moving forward with a teaching document on Communion could sow “discord” and that efforts should be made to “preserve unity” in the church.

Biden regularly attends Mass and takes Communion, often at St. Joseph on the Brandywine near his home in Wilmington, Delaware and at Holy Trinity in Georgetown, two miles from the White House. The Biden Administration has worked to expand access to abortion that was restricted under Trump and combat discrimination against LGBTQ Americans, positions that have been publicly opposed by the American Catholic Church. This isn’t the first clash between Biden’s faith and politics: In 2019, while Biden was campaigning in South Carolina, a Catholic priest released a statement saying he had denied Biden Communion because of his public stance on abortion.

But asked on June 18 at the White House whether he thought the bishops’ decision to move forward with instructions on Communion could lead to him being denied the sacrament, Biden said, “It’s a private matter, and I don’t think that’s going to happen.” 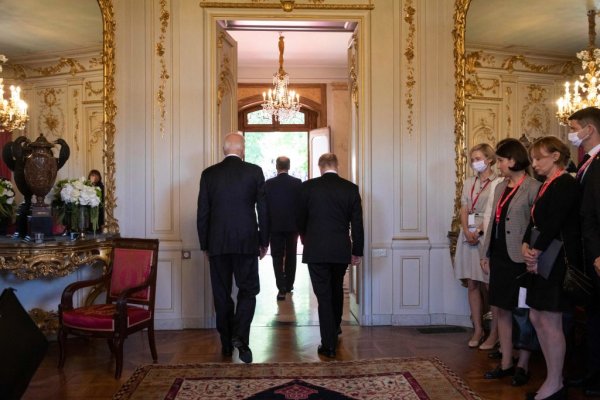 After Biden-Putin Summit, Tensions Remain
Next Up: Editor's Pick