We've Been Saying the Olympic Games Are Dead for Decades. Here's Why They Keep Going

Ideas
By L. Jon Wertheim
A senior writer and correspondent at 60 Minutes, L. Jon Wertheim is the author of “Glory Days: The Summer of 1984 and the 90 Days that Changed Sports and Culture.”

Are the Olympic Games dead?

It’s a reasonable inquiry. The Tokyo Olympics, already postponed for a year because of COVID-19, are scheduled to commence on July 23, under fraught circumstances. With Japan in a state of emergency, and the Japanese healthcare system stressed to the breaking point, an overwhelming majority of its citizenry has voiced strenuous objection to the country continuing to host the Olympics.

And who can blame them? The Olympics present an almost singularly-awful set of circumstances for a global pandemic: hundreds of thousands of people from all over the globe converge on a single site. They sit for hours in tight quarters—often indoors—yelling in open-mouthed excitement. Meanwhile, thousands of athletes not only compete , but live (and carouse) together in close quarters in a “village.” After 16 days, the guests board flights and return to their home countries.

The Olympic torch may be flickering this summer, but that dire inquiry—Are the Games Dead?— was splashed on the cover of Newsweek magazine in May of 1984, 37 years ago. It came amid a rough stretch for the Olympic movement. The Munich Games of 1972 were—and are—recalled foremost for the 11 Israeli athletes massacred by a group of terrorists. The legacy of the 1976 Games in Montreal was not one of heroic athletic achievement but heroic expense, as an event budgeted for $250 million carried a final price tag of $1.4 billion—a debt Canadians wouldn’t discharge until the fall of 2006. The United States was among the 65 countries boycotting the 1980 Moscow Games, an excursion, however justified, of geopolitics into sports.

So it was that for the 1984 Games, only two cities worldwide submitted bids to host: Los Angeles and Tehran. Then, the Shah was overthrown, civil unrest followed, Tehran withdrew its bid, and L.A. effectively became host-by-default.

Yet, like so much that summer, the 1984 Olympics would prove pivotal. Yes, they would mint a slate of stars, among them Michael Jordan, Mary Lou Retton and Carl Lewis. Yes, more female athletes than ever were permitted to compete—a still-embarrassing 23.1 percent. China sent multiple delegates, auguring a new sports power. Soccer opened the door to bending the amateur criteria, leaving the door ajar for the 1992 U.S. Dream Team in basketball.

But the ultimate success—and the ultimate legacy—of the 1984 Olympics was financial. The head of the Los Angeles Olympics Organizing Committee (LAOOC) was an underdog candidate, Peter Ueberroth. A college water polo player with Olympic ambitions, Ueberroth had his nose broken five times during his career, and only allowed the cameras to shoot him from one side. As a businessman, he was considerably more successful, a millionaire many times over before he turned 40. And he ran the Olympics as he would any other company.

The United States of America Team parade around the stadium infield during the opening ceremony for the XXIII Olympic Games on 28 July 1984 at the Los Angeles Memorial Coliseum in Los Angeles, California.
Steve Powell—Allsport/Getty Images

In advance of the Games, Ueberroth foresaw two sources of revenue: sponsorship and television. At the previous Olympics held in the U.S., the Lake Placid Winter Games of 1980, more than 400 sponsors signed on, but they generated barely $10 million in revenue. If you were a toothpaste company, you would donate tubes for all the athletes… and, presto, you were an Olympic sponsor. Ueberroth’s model entailed far fewer sponsors for far more money.

Only 30 companies would have exclusive use of the Olympic logo for their product line, and the minimum price was $4 million. Coke and Pepsi submitted sealed bids to become the beverage sponsor. Coke “won” and paid $12.6 million, more than the entire combined sponsorship revenue of Lake Placid. Kodak balked at the price tag and offered only $2 million, effectively daring Ueberroth to make a deal with a company based outside of the U.S. He obliged. And so it was that Fuji of Japan agreed to pay $7 million to process all the film on site, becoming an Olympic sponsor.

Ueberroth also saw television as a major source of revenue. The Olympics provided weeks of prime-time live programming we would later call “appointment viewing.” That is, the nightly content was unscripted, unchoreographed, and audiences wanted to watch it in real time. ABC won this bidding war, committing roughly $300 million to rights and production. How substantial was this contract? On the day the Soviets announced an Olympics boycott that spring in retaliation for 1980, ABC’s stock plunged as concerned investors feared ratings would be a bust. (Ueberroth offered a comforting theory that the boycott would result in more American medals, goosing ratings.)

When the athletes arrived in Los Angeles, the earmarks of this commercialization were hard to miss. Though the term had yet to enter the vernacular, they were given “swag bags” from the sponsors, including Levi’s Jeans and cans of Coke. Through AT&T, another sponsor, they were also given access to an “Electronic Messaging system,” whereby they “could message each other without picking up a phone.” (The majority of athletes did not bother to set up a password for this EMS, which was, in retrospect, one of the world’s first email networks.)

As Ueberroth predicted, the Games were a ratings bonanza. More than 180 million Americans watched, making the 1984 Summer Olympics, at the time, the most viewed event in television history. Per Nielsen, ninety percent of all U.S. households tuned into the Games at some point. McDonald’s had staged a giveaway game, offering free burgers (gold), fries (silver), and sodas (bronze) when American athletes won medals. The U.S. medal count of 174 meant that many American non-athletes ate free food that summer; but McDonald’s not only remained as an Olympic sponsor but reprised the promotion in 1988. And the other 1984 sponsors that had collectively committed more than $150 million were thrilled for the association.

In the end, the L.A. Games yielded a surplus of $250 million. Much of which was used to fund Los Angeles sports programs. The basketball facility where the current NBA star Russell Westbrook developed his game? It was funded by the proceeds from the 1984 Olympics. Same for a junior tennis league program that played a role in the development of Venus and Serena Williams.

Which brings us to Tokyo this summer. Japan might be reeling from COVID-19 and the Japanese public might be offended. But the Games will go on. There is simply too much money sloshing around for them not to. To borrow a phrase, they are too big to fail.

Tokyo had already committed an estimated $12.6 billion to infrastructure and facilities, a cost that has risen 22 percent to $15.4 billion due to the delay, more than double initial projections. Likewise, when the Olympics were postponed last year on account of COVID-19, NBC—a network that now brands itself as the home to the Olympics—suddenly had a $1 billion hole in its balance sheets. NBC had, perhaps self-aggrandizingly, referred to the 2016 Rio Olympics as “the most successful media event in history.” As traditional television transitions to streaming and mobile, NBC wasn’t about to let this opportunity pass. Neither were the sponsors, the multinational companies, counting on the Olympics not just for the affiliation, but for client hospitality events.

And you can draw a straight line connecting these commercial pressures and 1984.

Now, as then, the Games aren’t dead. Not by a longshot. But it’s worth noting that the reason they are alive has strikingly little to do with games, athletes or medals. 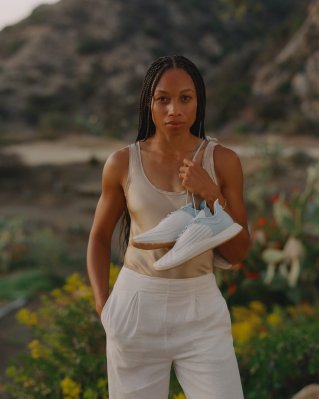 Allyson Felix Launches Shoe Brand Saysh Ahead of Olympics
Next Up: Editor's Pick