Copies of Next Digital's Apple Daily newspaper at a news stand on its 26th anniversary in Hong Kong, China on Sunday, June 20, 2021. Hong Kong’s pro-democracy Apple Daily has enough cash on hand to continue operating as normal only for a couple of weeks, according to a person familiar, after authorities used a sweeping national security law to freeze company assets and arrest top editors and executives.
Kyle Lam–Bloomberg/Getty Images
By John Cheng, Felix Tam and Iain Marlow / Bloomberg

Next Digital plans to stop publishing Apple Daily later this week if authorities don’t allow access to its bank accounts, and will make a final decision on Friday, the pro-democracy newspaper reported on Monday.

In an internal memo at the flagship newspaper of media tycoon Jimmy Lai, a senior editor said online news would stop at 11:59 p.m. on Friday night and the final print edition would be distributed on Saturday if the funds remain frozen. In a staff meeting, managers offered to allow reporters to quit immediately, according to people familiar with the situation who asked not to be named.

“In theory, if the company decides to shut down on Friday and lay off employees, there may be an additional month of payment in lieu of notice, but no one can guarantee that,” said the memo seen by Bloomberg News. “The wish of the management is for everyone to stay till the end, but the risks are unpredictable. Everyone should make their own decisions.”

Representatives for Apple Daily didn’t immediately respond to a request for comment.

Hong Kong national security officials are blocking the newspaper’s bank accounts, and it may need to close its print and digital operations unless authorities allow access to the funds, Mark Simon, a top adviser to Lai, said earlier on Monday. Companies that regularly do business with the newspaper tried to deposit money in its accounts on Friday but were prevented from doing so, he said.

The paper had roughly HK$521 million ($67 million) in cash at the end of March and said it was able to keep operating for 18 months from April 1 without any new injection of funds from Lai, according to an exchange filing. Trading in Next Digital shares is suspended.

Simon said the authorities’ decision to block access to that money is effectively shutting down the company. “It’s the government that decides if Apple Daily stays or goes,” he said. “Once they get rid of us, who’s next?”

Some teams have already told part-time staff including interns that there’s no need to show up at the office or keep working for the paper, according to three reporters and editors who asked not to be identified. Some staffers were planning to leave for other jobs after the raid on Thursday, they said, adding that they were worried that companies or media outlets won’t hire anyone who worked at the paper.

The newspaper, which cheered on Hong Kong’s unprecedented pro-democracy protests in 2019, has been under increasing pressure since China imposed a national security law on the city last year.

Lai, a media tycoon and well-known democracy advocate, is in jail for attending unauthorized protests. The city’s Security Bureau had earlier frozen some of Lai’s assets and sent letters to some of his bankers, threatening them with years in jail if they deal with any of his accounts in Hong Kong.

The U.S. called for the immediate release of the detained editors, while Human Rights Watch said the arrests amounted to “a new low in a bottomless assault on press freedom.”

In a statement, the Foreign Correspondents’ Club, Hong Kong, said it was “concerned that this latest action will serve to intimidate independent media in Hong Kong and will cast a chill over the free press,” which is guaranteed under the city’s mini-constitution, the Basic Law.

Simon, Lai’s adviser, said the government’s moves against Apple Daily tarnish the image of Hong Kong as an international financial center where information can flow freely and basic freedoms are protected.

–With assistance from Natalie Lung and Alfred Liu. 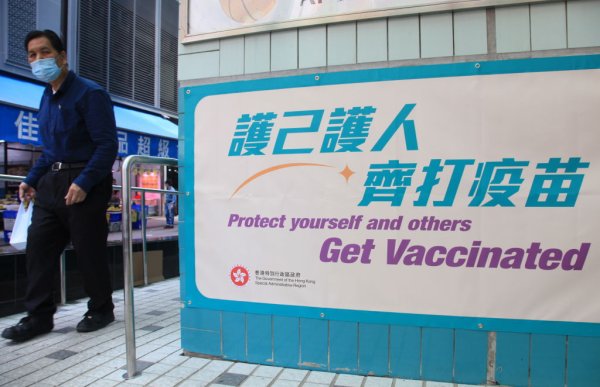