'This Is a Window of Opportunity.' Ret. General Vincent K. Brooks on Why Things Might Be Moving Again With North Korea

US General Vincent K. Brooks (R), then Commander of the United Nations Command, Combined Forces Command and United States Forces Korea, speaks during a press briefing on the flight by US B-1B Lancer over South Korea at the Osan Air Base in Pyeongtaek on September 13, 2016.
JUNG YEON-JE/AFP via Getty Images)
By Charlie Campbell / Shanghai

Last month, U.S. President Joe Biden hosted his South Korean counterpart, Moon Jae-in, at the White House. The allies agreed on a raft of deals covering COVID-19 vaccine deployment and hi-tech investment, and emphasized “their shared commitment to the complete denuclearization of the Korean Peninsula.”

Few know the intricacies of the North Korean problem better than General Vincent K. Brooks, who retired from active duty in January 2019 as a four-star general in command of over 600,000 Koreans and Americans comprising the U.S. Forces Korea, U.N. Command and ROK-U.S. Combined Forces. He also previously served as commanding general of U.S. Army Pacific.

Now a Senior Fellow at Harvard Kennedy School’s Belfer Center for Science and International Affairs, General Brooks spoke to TIME about opportunities for a breakthrough with North Korea during the Biden Administration.

TIME: How do you evaluate the outcome of the Biden-Moon Summit?

Gen. Brooks: It was productive and both sides walked out with a good sense of agreement. There were some interesting points in the final statements. For example, affirmation that all previous agreements [signed between President Trump, Kim and Moon] still stand and a commitment to the “denuclearization of the Korean Peninsula,” as opposed to “of North Korea.” I took those as joint signals to North Korea that the door is open. [On June 17], at the North Korean Plenum, Kim Jong Un said he was willing to fight adversaries, if need be, but also open to dialogue. And that sounds like an echo coming back. So, I was actually encouraged by it.

North Korea has sequestered itself during the pandemic, even turning down food aid. Given that complicating factor, is restarting negotiations plausible right now?

Yes, I do. North Korea will anticipate that it has the greatest amount of leverage and opportunity from now until about a month or two before the South Korean national elections [in March]. [Kim] has a keenly interested South Korean government that is running out of time and two progressive administrations, both the U.S. and South Korea, which doesn’t happen that frequently. So this is a window of opportunity.

North Korea has been burned when dealing with a departing administration before. The denuclearization deal signed by President Clinton in 2000 was effectively voided by President Bush including North Korea in his Axis of Evil soon after. Similarly, a 2007 joint declaration between South and North Korea was nixed by incoming South Korean President Lee Myung-bak a year later.

They will watch to see which way the wind is blowing in South Korea, but not wait entirely for that. I think there will be overtures that happen [before the South Korean election]. They won’t commit too deep at the present time, waiting to see the outcome of that election—Bbecause they have been burned and there’s tremendous risk anyway.

Speaking of risk, North Korea’s weapons capability appears to be advancing all the time, with new submarine-launch capabilities and the development of multiple-warhead rockets that are designed to evade U.S. defenses. How dangerous is the current situation?

It’s always dangerous—that hasn’t changed. North Korea’s weapons systems have not been eliminated. The only thing that stopped is nuclear weapons testing. So everything else seems to be as it was in the beginning of the summitry in 2018—or more advanced, as we’ve seen with a number of the conventional systems. So the danger is still there. But capability, less intent, does not equate to danger. It is capability and intent that equates to danger. We can’t discern at this point what are North Korea’s intentions, and that’s why dialogue has to occur.

Read more: Could a Woman Ever Lead North Korea?

I do not. I think the sanctions are the most visible object and [create] the most painful conditions for North Korea. But there are other things that can be discussed, which can create first steps in confidence building, and it doesn’t have to go straight to sanctions. To do so would be a mistake.

What kind of confidence-building steps could there be? After all, Kim Jong Un blew up the Kaesong Liaison office between South and North Korea in June 2020 and has stated that sanctions relief is essential to future progress.

What Kim Jong Un has been expressing, in my opinion, is a very clear focus on being able to establish a stable economy in North Korea, and I believe that includes being less dependent upon China. So if there are discussions that can contribute to that, while still maintaining international solidarity and pressure, then those are the kinds of things that should be considered.

The blowing up of the Kaeson Complex was more about slowing down South Korea, and being able to lick the internal wounds from multiple typhoons, the onset of COVID, and the sanctions. On top of that, the National Assembly elections in South Korea gave a super majority to President Moon’s party, which provided progressives with a platform to more rapidly advance North-South dialogue and reunification steps. I think North Korea anticipated that South Korea would rush in with a newfound political energy and a political mandate where they could take more risks on North-South engagement. And North Korea was not ready to have North-South engagement due to these internal dynamics. So I believe North Korea was simply sending a message: we aren’t ready, slow down.

Secondly, their leverage would not have been very great. If they had had to endure North-South engagements for the past year, they would not have been in a position of advantage to leverage South Korea … It’s risky—they may lose the window altogether—but I think that’s their calculation. A lack of interest to tease out the actual interest.

In April, Chinese President Xi Jinping appointed Liu Xiaoming, former Chinese Ambassador to the DPRK and the U.K., as a Special Envoy on Korean Peninsula Affairs, filing a post that had been vacant for some two years. Given spiraling relations Beijing and Washington, you think that Xi may intend to use his influence in North Korea as leverage in U.S.-China relations?

I don’t think so. My suspicion is they will compartment U.S.-China relations from the approach to North Korea. But I do believe Xi Jinping wants China to stay in front of whatever South Korea, North Korea and the United States might be seeking to undertake, just as he did with the very first summit. When it was clear there was going to be dialogue with the [U.S.] alliance and North Korea, Xi Jinping moved first and summoned Kim Jong Un to Beijing. So I suspect that Xi Jinping will try to maintain a tether on any North Korea initiative so that we don’t drift too far away. My supposition is that North Korea does not want to be 90% dependent upon China for its economy, which is currently in a shambles under those circumstances, and is seeking a different kind of independence. And that will be uncomfortable for China.

Some critics have accused President Moon of appeasing Kim Jong Un. After Moon banned activists from sending propaganda balloons into the North, a bipartisan group of 13 former U.S. officials accused his government of “undermining North Korea’s human rights movement” in an open letter. Do you believe he’s too close to North Korea’s leader?

With whom do you reconcile if not with your enemies? He’s doing things to convey mutual respect and not create anything that precludes the opportunity for dialogue. I don’t think it’s appeasement. I spent a lot of time with President Moon. I would characterize it as more pragmatic and opportunistic.

Following the Moon-Biden summit it was agreed to that South Korea would scrap the Revised Missile Guideline that limited its missile development to 800 km. Does this complicate an already very thorny East Asian security dynamic?

It’s interesting that North Korea came out and said this is hostile against North Korea. Of course, it really isn’t about North Korea—the limitations were about North Korea. The removal of limitations first, from South Korea’s perspective, is a matter of sovereignty, so it is not limited to act only on the Korean Peninsula. And it does certainly point toward South Korea’s role in regional dynamics in a very different way than was previously the case. Consequently, South Korea if it wanted to, could develop something that goes much further or has much greater payload. But they haven’t done so.

Are you concerned with Beijing’s increased movements in the South China Sea especially around Taiwan? How do you think the U.S. should respond?

There’s lots of reasons to be concerned. First, for Taiwan’s sense of independence, and the potential for a miscalculation, or something could expand greater than the current tension.

There are two potential efforts underway: one that is tactical and one that is strategic or geopolitical. So the best posture is to be able to impact both of those courses of action. That means that whatever work is done by U.S. allies and partners—building relationships with Europe, in the South Pacific, with ASEAN—all has to be geared toward preserving freedom of action, operating with China and not necessarily against China, but not yielding geographic spaces whether in the South Pacific or Indian Ocean to China, where there’s no counterbalancing influence. So that’s the geopolitical move that has to happen, whatever instruments are needed to do that, we ought to be paying attention to. 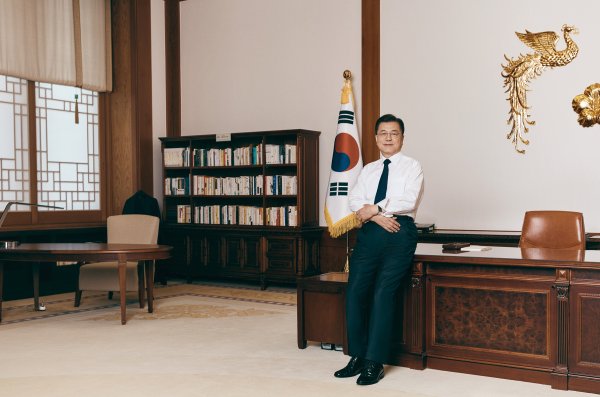 A Final Attempt to Heal South Korea
Next Up: Editor's Pick