That chill that went down your spine yesterday? The ghosts of the Cold War were alive and well in Geneva as Russian President Vladimir Putin stepped to his lectern to describe his talks with President Joe Biden. Fielding questions from Russian and U.S. media, Putin deployed one of Moscow’s most reliable and vexing tactics from the Twentieth Century in blunting criticism from Washington: Whataboutism.

When asked about the political violence in his own country, Putin dismissed it as unremarkable. “What is happening in our country is also taking place in many other countries,” he said. “People … are killed in American cities every day. You can barely say a word there before you are shot in the face or in the back, regardless of who is nearby, children or other adults,” Putin said, according to the official Russian translation.

Cold War-era diplomats—and we, their students—are all too familiar with this tried-and-true maneuver. For decades, when confronted with the sins of Moscow, Soviet-era diplomats simply hurled America’s own shortcomings back across the summit tables. For those steeped in such diplomatic talks, Putin’s whataboutery was entirely predictable. It was also nonetheless maddening because, well, it isn’t entirely false, and thus cannot be dismissed.

Whataboutism is the rhetorical equivalent of a teenager ignoring the infraction on the table and simply turning the case against the adult. Yes, I broke curfew, but you sped in a school zone. It doesn’t dispute the underlying facts. It just accuses the accuser of a corresponding offense. When successful, it derails the actual conversation and muddies the water. There’s actually a Latin term that students learn in their freshman logic courses for this brand of ad hominem attack: “tu quoque.” You also. It’s a sucker punch that has worked for teenagers and autocrats alike for millennia.

Even before the Cold War, Soviet propagandists had developed a knack for turning America’s problems against it. In 1932, Soviets joined the cause of the Scottsboro Boys, nine Black teens wrongly accused of raping two white women in Alabama. “Freedom to the Prisoners of Scottsboro!” remains one of the most iconic propaganda posters in the Soviet gallery. The American Communist Party’s legal arm featured more prominently in the Scottsboro Boys’ early legal defense than the NAACP. And it helped the pre-World War II Communists to plant modest footholds in the Black community.

As the Cold War got underway in earnest, Soviet propaganda organs got in on the action. As one State Department memo noted in 1950: “No American problem receives more wide-spread attention, especially in dependent areas, than our treatment of racial minorities, particularly the Negro… Only by full publicity to improvements in this field can the United States position be put in fair perspective before the bar of world opinion and communist propaganda be discredited.” Later that year, Sen. Henry Cabot Lodge, a Republican, called America’s troubled race relations “our Achilles’ heel before the world.”

There are binders and binders of such examples sprinkled through the State Department archives. Whataboutism became a shorthand for a needling distraction in the hallways of Foggy Bottom’s State Department headquarters ahead of any Soviet or Russian summit: anyone standing in for Moscow could just shoot across the table this efficient—and accurate—rejoinder: “But you lynch Negroes.”

So when Putin was confronted yesterday about the jailing of opposition leader Alexei Navalny and allegedly poisoning his critics, he went for an emotionally charged pivot, comparing the Black Lives Matter protests to uprising in “pogroms,” and dismissing the Jan. 6 insurrection as merely a group that “went to Congress with political demands after the election.” He also dipped into the black-site CIA interrogation operations after Sept. 11 and the still-open military detention center at Guantanamo Bay, Cuba, for good measure. Such reminders can’t help but deflate the puffed-up chest of Captain America.

None of this is particularly novel. The 1957 integration of Central High School in Little Rock, Ark., became a global story in the Soviet sphere because of coverage in Communist newspapers. The assassination of Dr. Martin Luther King proved to Soviet partisans that America had failed its promise of equality. More recently, Occupy Wall Street and the numerous deaths of Black Americans at the hands of police have continued to feed the Russian government’s argument that America is an imperfect ombudsman for freedom.

After all, the best propaganda has roots in truth, and it doesn’t have to be “fake news” to actually be useful. So why wouldn’t Putin invoke America’s latest turmoil? It’s blindingly effective. And it’s fair to say Washington has not taken adequate steps to pry this rhetorical cudgel away from its adversary. 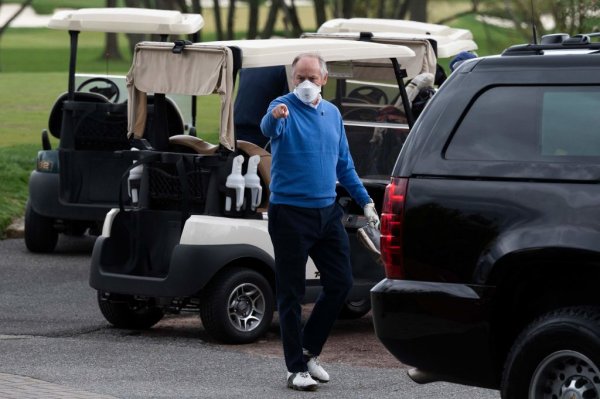 Top Biden Adviser Tells Congress the Chase for Bipartisanship Is Running Out of Time
Next Up: Editor's Pick