Bennifer 2.0 Got You Pining For Your Ex? Therapists Say Forget It

Ben Affleck and Jennifer Lopez at the 'Vanity Fair' Oscars Party Morton's, Beverly Hills, CA in March 23, 2003.
Patrick McMullan—Getty Images
Ideas
By Belinda Luscombe
Luscombe is an editor-at-large at TIME and the author of Marriageology: The Art and Science of Staying Together.

The one that got away. The long lost soulmate. The what-could-have-been. The unlikely romantic rapprochement between Ben Affleck, 48, and Jennifer Lopez, 51, has captured the public interest with an intensity that feels like a throwback to a time before reality TV when there was a limit to how many famous people we were allowed to care about. Photos of the once-engaged couple merely disembarking a plane together made global headlines. By the time the New York Post got a photo of an actual kiss, even people who could not name one J.Lo song were riveted.

Why this middle-aged couple and why now? Part of it, of course, is the duo’s storied history. They met on the set of a legendarily bad movie (Gigli) in 2002 when she was married. They made scandalous music videos on yachts, got engaged with a pink diamond, weathered several tabloid scandals and another poorly received movie (Jersey Girl), called off one wedding ceremony the day before it was to take place, and eventually broke up in early 2004. Six months later she married Marc Anthony. The following year, he married Jennifer Garner. That’s a whole lot of narrative arc in three short years.

But for many folks, Bennifer 2.0 (3.0, if you count the whole Jennifer Garner marriage) is more than just a standard issue famous couple fairy tale. It’s personal. “I think we all know this feeling on different levels and we see something of ourselves in what’s happening with Ben and J.Lo,” says James Sexton, a New York divorce lawyer and author of How to Stay in Love. “At some point we all had a connection with our exes.” Seeing a couple reunite can remind people of the road not taken in their lives, or what young love was like, or of a lover they regret losing. And of course, in memory, all exes take on an idealized celebrity-esque sheen; like Lopez, they still seem remarkably untouched by time. Like Affleck, they seem to be the kind of interesting and fixable.

Therapists say it’s not unusual for people to hanker after lost loves, long after the relationship has ended. “In my experience, sometimes people feel they found a true love at an age that was too young to be able to stay with that person,” says Daphne de Marneffe, therapist and author of The Rough Patch. “Immaturity, wanting more experience, poor relationship skills doomed things and they got broken up with, and yet that person remains ‘the one that got away’ long after they’ve married someone else.” Indeed, in 2016, while Affleck was married to Jennifer Garner, Lopez told People that their breakup was not because they didn’t love each other: “I think different time, different thing, who knows what could’ve happened, but there was a genuine love there.”

The pandemic, which has kept people apart from each other, has amplified the yearning for connection, say therapists. “I think [the fuss is due to] COVID, frankly,” says Julie Gottman, therapist and co-author of several bestselling marriage books with her husband, John Gottman. “People have experienced isolation, they’ve experienced a lot of pain, of loss, people getting sick people dying around them. People have been reprioritizing.” Gottman thinks the pandemic dissolved the fantasy of immortality that people generally live with and seeing couples like Affleck and Lopez reconnect inspires them to examine their future. “For a lot of people they’re thinking, you know, it may not have been perfect, but it’s better than being all alone and I don’t want to grow old alone. I want to share my life with somebody that I have some connection with.”

But it’s not just their futures that people are reconsidering; it’s their past. The isolation might have led to people thinking about those from the old days with whom they’d like to reconnect, say therapists. Even before the pandemic, de Marneffe noticed a desire in her clients as they grew older to understand events from a different angle or to make sense of their lives. The implausible realignment of two stars after more than a decade and a half might supercharge such ruminations.Read more: Why Would a Long term Couple Like Bill and Melinda Gates Get Divorced? Here’s What Therapists Say

Of course, in an era where activity is restricted and people are bored, a genuinely unusual love story resonates more. And after a year full of surprises, nearly all of them unwelcome, the Bennifer reunion is at once unlikely, but also like seeing an old friend. Scott Haltzman, a psychiatrist and medical director at Fuller Hospital in Massachusetts, says nostalgia might be playing a big role. “Jennifer and Ben’s relationship emerged at the threshold of major changes in our society. In 2002, people weren’t getting their information from the Internet, they weren’t getting daily tweets from celebrities and there was no such thing as following somebody on Facebook,” he says. “Absorbing the ideal of Jen and Ben being back together brings with it recollections of a calmer time in the world of celebrity news.” Sexton agrees: “There’s something comforting about something that can be both simultaneously new and familiar.”

For those itching to reach out to their former flames, however, the therapists and experts have a word of advice, and it is: don’t. “The opportunity to reconnect with ‘the one that got away’ or one’s ‘soulmate’ has a universal fairytale appeal,” says Haltzman. But the belief that there is one right person for each of us, one Ben for each Jennifer, he says, is a myth. “My own experience as a marriage educator and my understanding of marriage research has led me to the conclusion that soulmates aren’t found,” he says. “Soulmates are made.” 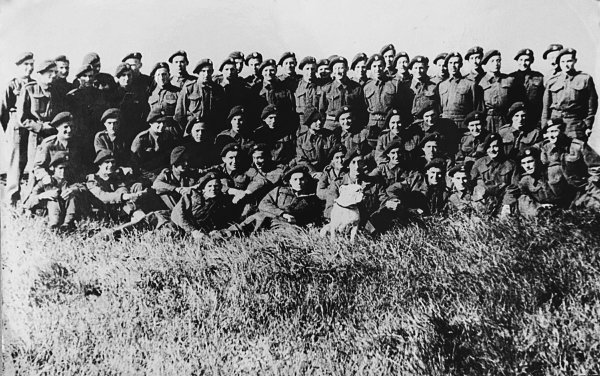 The Untold Story of Jewish Commandos in World War II
Next Up: Editor's Pick