All the trappings of a major international summit were on full display as President Joe Biden and Russia’s leader Vladimir Putin met Wednesday in an 18th century manor house overlooking the mountains of Switzerland and waters of Lake Geneva. A row of large Russian and U.S. flags flapped along Geneva’s main bridge, the Pont du Mont-Blanc. The city’s iconic 400-foot spray of water in Lake Geneva was lit up the night before in red and blue for the colors of the two countries’ flags. Thousands of Swiss spectators—few cheering or protesting, most with neutral expressions and snapping photographs— lined the streets to watch the two leaders’ motorcades travel through the city.

The stagecraft played to Putin’s personal vanity and his long-standing desire for Russia to be taken seriously as a major rival to the U.S. The summit setting was designed to place the two leaders on equal footing, and emphasize the global power they each hold. When Biden and Putin sat down to meet in a library filled with leather-bound books inside the Villa La Grange, an antique globe had been placed between the two leaders.

At the start of their meeting, Putin was quick to point out that the summit was Biden’s idea. “Mr. President, I’d like to thank you for your initiative to meet today,” Putin said, leaning back in his chair in his signature unfazed slouch. “The U.S. and Russian relations have a lot of issues accumulated that require the highest-level meeting,” Putin said, adding that he hoped the meeting would be “productive.”

When Biden spoke, holding a notecard in his hands, he described the U.S. and Russia as “two great powers,” and said, “I think it’s always better to meet face-to-face.”

The White House said it hadn’t come into the high-stakes meeting with concessions or specific, pre-planned initiatives to unveil. But Biden spent days working with European leaders to bolster alliances and bring a more unified message to a summit that comes after years of Putin’s active interference in the U.S. election, allegations of poisoning and jailing rivals, standing by as criminal hackers launched crippling ransomware attacks on U.S. businesses and continuing to use Russian forces in Syria and Ukraine. In the meetings on Wednesday, which went for just over three hours in the Swiss villa but didn’t involve a meal together, the U.S. said it wanted to find places to work together, lay down clear consequences for Russian cyber attacks and malicious interventions in U.S. politics.

Biden thinks he knows how to spur the Russian leader to action on these and other issues that are important to the U.S.: by speaking directly to Putin’s desire for Russia to be seen as an important international player. In a press conference after the meeting, Biden said he had appealed to Putin’s self-interest in calling for Russia to stop meddling in U.S. elections and stop providing cover for damaging cyber attacks. When Putin presides over those actions, “his credibility worldwide shrinks,” Biden said. Not abiding by international norms “diminishes the standing of a country that is desperately trying to make sure it maintains its standing as a major world power.”

Putin seemed to relish the platform in Geneva. He is the only world leader on Biden’s European tour who got his own day. After meeting with Biden, the Russian autocrat gave his own press conference at a lectern with the coat of arms of the Russian Federation. He said the two leaders agreed to work together on cyber security and nuclear weapons agreements, though he deflected any blame about cyberattacks coming from Russia.

When asked about his role in interfering in U.S. elections, Putin leveled allegations that the U.S. government interferes in Russian domestic politics. He said Biden spent time talking about his family and his mother and telling stories. “This didn’t have something to do with our business,” Putin said, speaking through a translator. “but it shows his qualities and his moral values.”

Asked what kind of person Biden is, Putin described the American president as “a constructive person, well-balanced, and experienced, a seasoned politician, and I expected that.” Putin said the discussions were “frank and candid”, “fruitful,” and “productive” and said the two leaders “dovetail” together. “I believe we spoke the same language,” Putin said. “It doesn’t mean we need to look into the eyes and see his soul,” he said, referring to a comment Biden once made that he had done just that with Putin, and concluded the Russian President didn’t have one.

Regardless of what Biden saw in Putin’s eyes on Wednesday, he drove home the point that whatever the egalitarian optics of the event, it’s Russia who’s in a weak position.

“Russia’s in a very, very difficult spot,” Biden said as he talked to reporters standing under the wing of Air Force One moments before boarding. “They’re being squeezed by China. They want desperately to remain a major power. You all are writing, not illegitimately, Biden already gave Putin what he wants, legitimacy, standing on the world stage with the President of the United States,” Biden said. “They desperately want to be relevant.” 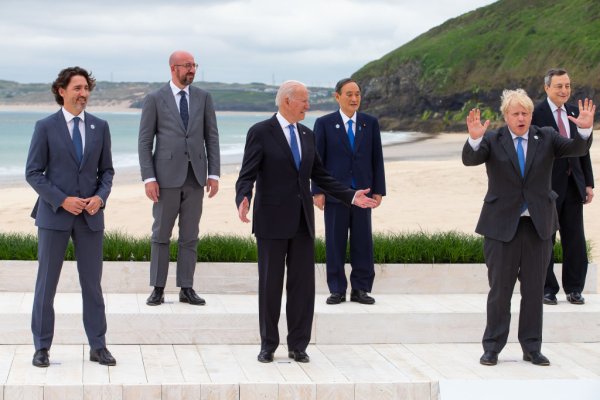 Joe Biden Tries to Reset Diplomacy After Trump
Next Up: Editor's Pick