Iran Is Too Often Viewed Through the Lens of Our Rulers. Try Looking Through the Eyes of Our People

Young Iranians walk along a street in northern Tehran on June 16, 2021
Morteza Nikoubazl—AFP via Getty Images
Ideas
By Tara Kangarlou
Tara Kangarlou is a Iranian-American journalist who has produced, written and reported for CNN, Al Jazeera America and Al-Monitor. Her book The Heartbeat of Iran was published on June 1, 2021.

No child should lose a mother because the hospital suddenly runs out of blood; no father should feel ashamed for not being able to put food on the table in a country as rich as Iran; and no college graduate should live with the constant anxiety of finding work, let alone surviving in their own homeland.

Yet this describes the reality of living in Iran in 2021. With over 80 million people—more than twice the size of Canada’s population—my birth place and where I grew up well into my teenage years has one of the youngest and most educated, yet disillusioned and despondent societies in the region.

A quarter of Iran’s population is under the age of 14, close to half are under the age of 40, and almost all are struggling at a time of severe financial austerity and deep political lassitude toward their government, but also forces abroad. Unemployment is soaring, inflation is at an all time high, child-labor and prostitution are once again on the rise, pharmacies have the lowest stocks of medicine in years, mass exodus of professionals and skilled workers have risen throughout the pandemic, and the agonizing brain-drain of Iranian youth continues to be an epidemic of its own.

On Friday, Iran is set to orchestrate its 13th presidential election since the 1979 Islamic Revolution. If I was still living there, I would join the many thousands who are planning to boycott the vote as a meaningless circus. There’s a running joke among people that the government will hand out the much-needed COVID-19 vaccine just to lure people to the voting polls. The fact so few are willing to participate in this is testament to the distrust of the nation toward their leaders.

There is no ordinary Iranian living in the country who is not frustrated with the political establishment — only the die-hard revolutionaries whose lifeline depends on the system. Political in-fightings between the various factions have gone haywire—unmasking their ferocious hunger for political and financial capital amongst the elites; money laundering and embezzlement by government insiders and their offsprings are off the charts; and hardline forces are more emboldened than ever before as the result of the United States’ failed maximum pressure campaign, which has marginalized genuine reformist voices and further pushed ordinary Iranians into a financial abyss.

To our humiliation, Iranians are often viewed globally through the lens of the country’s rulers, stereotyped by insular narratives, and rarely seen through our humanity, culture, and millennia-old heritage. As an Iranian-American to this day I find myself having to explain my “identity,” faced with a constant effort to dismantle the militarized outlook of my western counterparts toward my upbringing, my people and a country that should not solely be defined by its government.

So as the world watches yet another “election” in Iran, let’s not forget the many millions of Iranian people — young men and women — whose aspirations, dreams, and hopes mirror that of the rest of the world.

Any time Iranian youth have been granted an opportunity, they have grasped it with open arms. At home, they make up some of the most tech-savvy and educated demographics in the Middle East. Over the years, they have creatively found ways to keep afloat despite a stagnant economy, lack of entrepreneurial opportunities, and many socio-political hurdles at hand.

In my years as a reporter, and especially for the profiles of Iranians in my book The Heartbeat of Iran, I’ve met people here from every walk of life, who are united in their belief in a better future; Hassan, a thirtysomething saffron farmer who dreams of the day that his crop can be exported worldwide; Faezeh, a college graduate who broke away from her extremely conservative family and now loves jazz and Pink Floyd; Laleh, a young woman who broke through her patriarchal society to become Iran’s first female racing driver and dreams of one day meeting Hillary Clinton. Here there are artists, athletes, teachers, shopkeepers and laborers who only want to live a decent life in one of the oldest and greatest civilizations on earth.

Many of the most talented and creative Iranians have already left their country for better economic and social opportunities. But many others choose to remain — and, as a journalist, I’m committed to amplify their stories, their voices, and their needs; to let the world know of their zeal and resilience.

The danger of reducing an entire nation to nuclear talks and missiles, as the West so often does, misses the incredible untapped potential in Iran. It is the second largest country in the Middle East with 15 land and sea borders; if it can diversify and move away from an oil and gas based economy, and build upon the many missed opportunities of the past forty years, it can set an example not just for the entire region but the entire world.

No matter what happens in the presidential election, nothing good can come unless the world sees Iran not through the lens of its leaders but of its people. Instead of putting all efforts on stifling Iran, the world must find ways to connect with and empower its people. It is only then that real change can come. 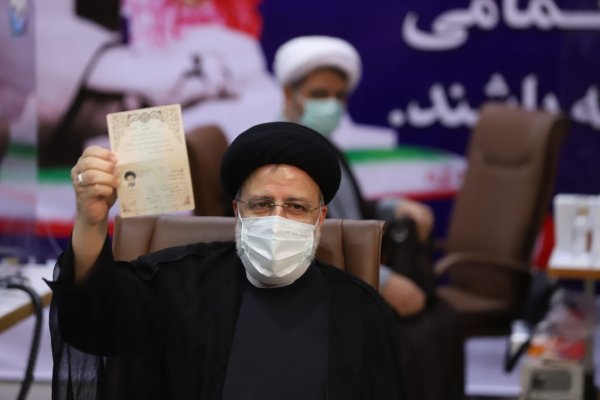 Meet the Man Likely to be Iran's Next President
Next Up: Editor's Pick