Can We Rein in the Power of the Presidency After Trump?

There are at least 81 million or so Americans who would like to forget all about Donald Trump and his presidency. Late-night television host Stephen Colbert has stopped saying his name altogether, referring to him simply as “the former president.”

But the ongoing stream of criminal charges arising from the Jan. 6 riot at the Capitol have made it all but impossible to forget Trump and the violence he inspired that day with his lies about winning the election. Trump himself, even while kept off Facebook and Twitter, has refused to go away quietly, teasing supporters at a rally last weekend with the prospect of another White House bid in 2024, and exerting his influence over GOP leaders.

Even if we could forget him, though, it’s important for the country to remember Trump—if only to deter the kind of blatant power-grabs that he attempted in office and to rein in the powers of the presidency in his wake, no matter who sits in the White House.

When the Watergate scandal forced President Richard Nixon to resign in 1974, many Americans didn’t want to think much about Nixon anymore, either. But his departure ushered in a slew of critical new federal laws from Congress to restrict the bloated power of the presidency through limits in campaign finance, ethics, wiretapping and surveillance operations, war powers, and more. Trump’s imperial hubris, which rivaled only Nixon’s in the view of many historians, now demands its own wave of corrective measures. Only then can Congress hope to deter another president from wielding the levers of power with such abandon, whether it involves a commander-in-chief lining his own family’s pockets, hiding his taxes, firing government watchdogs investigating his administration, or trying to reverse the results of an election.

A Capitol Hill source tells me that Democratic leaders in the House have been working on a new plan to limit presidential powers in response to Trump’s abuses; that plan could be rolled out in the coming weeks. The proposal would build on a series of reforms first proposed by Democratic leaders last September to restrict the president’s authority to accept personal payments from foreign governments, issue unlimited pardons, get rid of inspector generals without cause, or take other controversial steps that Trump employed as president.

That initial plan came out six weeks before the election. A lot has changed since then: Trump was voted out of office; the Democrats took control of the Senate, along with the House; and the Jan. 6 rioting at the Capitol made painfully clear the dangers posed by an unchecked president determined to undermine an election.

With Senate Republicans having blocked the creation of a Jan. 6 commission, it doesn’t bode well for any further attempts at holding Trump to account for his abuses.

The new proposal that Democrats are working on will likely feature steps aimed at limiting a president’s power to interfere with certified election results. Congress is given the power under the Constitution to regulate federal elections and it could, for instance, , expressly prohibit a future president from using the power of the office to pressure election officials to overturn the validated results of a federal election. Federal law already authorizes criminal prosecution of any official who “knowingly and willfully deprives, defrauds, or attempts to deprive” state voters of a fair and impartial election. An even more explicit ban on a president waging “pressure campaigns” to undermine the work of election officials would help shield the integrity of the electoral system from internal attack.

Read More: The Secret Bipartisan Campaign That Saved the 2020 Election

Few would have thought that was necessary before Trump took the extraordinary steps of calling election officials directly in Georgia to urge them to “find” the votes to change the state election results, and summoning Michigan officials to the White House after the state had already certified its results. But the common thread running through Trump’s presidency was always his lust for power. As Trump himself famously declared—multiple times, in fact—”I have to the right to do whatever I want as president.”

It wasn’t true, of course, but Trump acted as if it was, which is why he became the only president in history impeached twice —first for pressuring Ukraine to dig up dirt on then-candidate Joe Biden, and then for inciting the Capitol riot in an effort to reclaim the power the electorate had taken from him. And those were just the worst of the abuses.

Most presidents in modern history have sought to stretch the limits of executive power at one time or another, but none did so as frequently as Trump, or in ways so nakedly intended to benefit his own self-interest. In skirting the laws and norms of presidential power, Trump “acted in ways that make all of the problems that were on the radar screen before much, much, much worse,” said Jack L. Goldsmith, a senior Justice Department lawyer in the George W. Bush administration who co-authored a new book with Bob Bauer, the White House counsel under President Obama, called After Trump: Reconstructing the Presidency.

Trump built his presidency on shattering Washington norms, and his behavior exposed holes in the rule of law that we didn’t know existed. Trump, rightly denounced as an authoritarian in many quarters even before his attempt to inspire a violent insurrection, succeeded, if nothing else, in muddying the waters as to what a president was truly allowed to do in a nation of laws.

The courts were willing to intervene only sporadically, as federal judges did in the initial versions of Trump’s so-called “Muslim ban,” rejecting them as over-reaching and unconstitutional. That leaves the challenge up to Congress. As we saw after Nixon’s fall, Congress has the clear legal power under our system of checks and balances to rein in the powers of a presidency run amok and seek to curb future abuses.

It could, for instance, make explicit what—at least before Trump—was commonly understood to be a ban on a federal candidate seeking anything of “value” in a campaign from a foreign power, as Trump did in welcoming dirt on his political opponents from Russia, China and Ukraine. It could require presidential candidates to make their tax returns public as part of longstanding financial disclosure requirements for federal officials, and it could enact a clear ban on presidents profiting off payments from foreign payments to their properties under the “emoluments clause,” an issue the Supreme Court unfortunately left unanswered.

At its most ambitious, Congress could even try to legislate an answer to one of the biggest legal obstacles that Special Counsel Robert S. Mueller faced in his Russia investigation: the belief that a sitting president cannot be charged with a crime. Mueller’s team found significant evidence that Trump repeatedly obstructed the probe, but they reached no conclusion about whether Trump broke the law because of a prior legal opinion at the Justice Department finding that criminal charges against a sitting president would “unconstitutionally undermine” his ability to do his job. That opinion has never been tested in court, and the Constitution itself is silent. A willing Congress could remedy that through a narrow statute declaring that a sitting president can, in fact, be charged with a crime for relevant offenses during his time in office.

Restrictions on the presidential authority would likely face legal challenges. Whether Democrats have the political will and muscle to impose new limits on the presidency now, in the bitterly polarized climate that Trump left behind, is still unknown.

But the idea of reining in presidential excesses should, in theory, be a bipartisan cause. With the balance of power now flipped in Washington, some Republicans have already accused President Biden of overstepping his presidential authority through a flurry of early executive orders and through the airstrike that he ordered in Syria in February—a military step that he took, like Trump and other presidents before them, without congressional authorization.

Supporters of the “let sleeping dogs lie” mantra might well disagree with the idea of re-visiting Trump’s abuses. After all, with Trump gone—at least for now—does the country really need new checks on presidential authority and another political battle over his legacy? Perhaps, as some commentators have predicted, America will never see another president like Trump, so willing to flout longstanding legal limits and norms.

After the last four years, however, that doesn’t seem like a risk the country can afford to take. 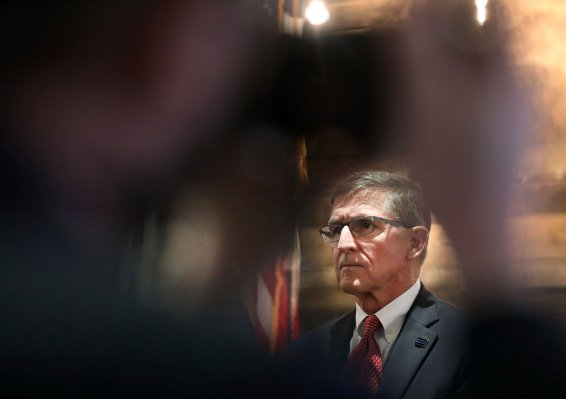 Michael Flynn's Attack on Democracy
Next Up: Editor's Pick