As Germany Acknowledges Its Colonial-Era Genocide in Namibia, the Brutal Legacy of Diamond Mining Still Needs a Reckoning

An abandoned diamond mine in the the Restricted Diamond Area in Namibia in 2011.
Eye Ubiquitous/Universal Images Group/Getty Images
By Steven Press

Between 1904 and 1908, Germany’s military and leadership oversaw the killing of at least 80,000 Africans in what is now the independent country of Namibia. On May 28, Germany apologized. Declaring his country’s past violence in Namibia “genocidal,” Foreign Minister Heiko Maas also pledged $1.3 billion in aid to Namibians, whose capital, Windhoek, still has a prominent street named after Otto von Bismarck.

The German apology is a commendable step and important precedent. But its parameters are inadequate, and one reason why may be embedded in your family’s heirloom engagement ring.

Millions of carats in diamonds have been exported from Namibia since 1908. These same sparkling stones have a dirty history tied to German colonial rule. Right now, official statements about Germany’s debt to Namibia do not account for those gemstones at all. The debt Germany owes is construed as limited to the recognized period of genocide—even though the real money that Germans made and controlled in Namibia came after 1908, and the process of making that money implicated many parts of the world in a deadly, brutal colonial process. We cannot really assess what Germany and the world “owe” Namibia until we consider this economic dimension of the past.

For much of modern history diamonds were rare, at least outside of India and Brazil. In the 1870s, the situation changed because of giant open-pit mines in and around Kimberley, South Africa. Nowhere was this development more welcome than in the United States, which in the late 19th century became by far the biggest consumer of diamonds in the world.

Given the ubiquity of advertising for jewelry today, one might assume that Americans always had a passion for diamond engagement rings. In fact, the custom of giving such rings became widespread only after the diamond boom in Southern Africa. Even among the rich in places like New York City, a diamond was only one of several stones that a fiancé might choose, if he even gave anything ornamental. There was not yet a standard for “engagement” rings, let alone a thought that every bride could or should possess them. But one thing about diamonds was already true: they held extraordinary profit potential, with the “value” of a stone multiplying several times between extraction in Africa and arrival in a retail case at an American jeweler’s shop.

In the 1880s and 1890s, the idea that engagement rings should be diamond started to take hold in the United States, to the point that it looked like a tradition despite never having been one. Meanwhile, Germans began settling in Southwest Africa with the conviction that diamonds would turn up there, because of the Namib desert’s proximity to lucrative South African mines. Adolf Lüderitz, the “founder” of the German colony in Namibia, conned indigenous leaders out of their land. But his hunt for diamonds proved fruitless—and, in fact, he died while prospecting.

Lüderitz’s successors hunted clues, spurred on by gemstones that sporadically popped up in the hands of indigenous traders and European missionaries. Backed by major German banks, some Germans sought to colonize stretches of land judged likely to contain diamond mines. Between 1904 and 1907, a dozen spots taken from slaughtered Herero and Nama people—the victims of the recently acknowledged genocide—were identified by engineers as containing “blue ground,” a type of rock that had so far accompanied all diamond finds in South Africa. German Emperor William II viewed documents on this subject around the same time as he backed an infamous “extermination order” from his now-reviled general, Lothar von Trotha. People can view the correspondence today in the Berlin-based archives of the German state.

In 1908, when Germans at last found major reserves of diamonds—in sand dunes, not underground mines—they discovered quantities so massive as to allow for more than a century of continual mining. Insiders confirmed to a consortium of German financiers that billions of dollars’ worth of diamonds (in 1908 terms!) lay buried in the shifting sands of the Namib desert. Germany, owing to its colonial occupation of Namibia, suddenly controlled as much as 30% of the world’s diamond supply. There was major money at stake. And there was a compelling new reason for Germans to continue, and legally endorse, violent acts that left Germans as owners of nearly all Namibian property. Chillingly, the core of the nascent German diamond business, a boomtown oceanside settlement grandiosely named Lüderitz, served as the site for a German concentration camp imprisoning Nama and Herero from 1904 to 1908.

German Foreign Minister Heiko Maas speaks to the media to confirm that Germany has reached an agreement with Namibia over Germany's admitted colonial-era genocide in Berlin, Germany on May 28, 2021.
Sean Gallup—Getty Images

As the German government sought to monetize Namibian diamonds after 1908, they had to assemble a workforce but, owing to the genocide, found few Nama and Herero willing or able to participate. The “solution” was the importation of tens of thousands of additional African workers. The largest such group consisted of Ovambo people, who were indigenous to Southwest Africa but lived in an area to the Namib desert’s north, outside German colonial control. Starting in 1908, many Ovambos traveled to diamond fields hoping they could send their wages home to families devastated by drought and harvest failure. Once arrived, though, the workers met with a nightmare. Living conditions were abysmal, beatings and contractual fraud were rampant, and death rates grew so high as to rival those of the genocide. The diamond industry established under German colonial rule perpetuated a relationship between violence and profits. And Namibian diamonds became “blood” or “conflict” diamonds, before the concept existed.

German output from Namibia involved clear, high-quality stones that were small, typically ranging between 1/8th and 1 carat in size. The world had never before seen this kind of stone in such a prodigious volume as Namibia yielded under German rule. Meanwhile, the increased flow of diamonds from Namibia coincided with the notion, captured in contemporary newspaper ads, that “there was a diamond ring for everyone,” and thus with the triumph of engagement ring culture in the USA. Demand stemmed not only from rich consumers, but increasingly from the poor and middle class. For millions of Americans, German violence in Namibia became a precondition for, and provided a symbol of, romantic love.

Today, conversations in Germany about Namibia tend to operate within established parameters, concentrating on moral debt to the descendants of the Nama and Herero, the indigenous peoples nearly wiped out between 1904 and 1908, and on the repatriation of Namibian cultural artifacts sitting in German museums. While these emphases are proper, the conversation is incomplete if it doesn’t also include economic history. As with Namibian land—the large majority of which still rests in European hands—ownership of Namibian diamond wealth was effectively seized by Germans before, during and after the genocide. Later, as German rule started to collapse in World War I, control of diamond rights in Namibia was sold to South Africans at prices generous enough to make many millionaires.

It is crucial to remember that, absent German colonial violence, lasting transfers of wealth from Namibia would not have occurred in the way they did. It is also important for global consumers to realize how they and their ancestors might have played an unwitting role in this tragedy.

Though brief in its duration, German colonialism in Namibia proved economically significant—for Germans, for Africans and for global commodity chains connected to the United States. Germany’s official conversation about genocide has made notable progress. But Namibia, and the world, need more.

Steven Press is the author of Blood and Diamonds: Germany’s Imperial Ambitions in Africa, available from Harvard University Press 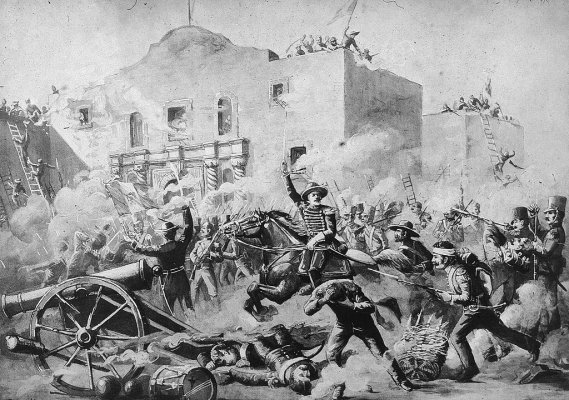 It's Time to Correct the Alamo Story
Next Up: Editor's Pick