With the Help of a World Full of iPhones, Apple’s AirTags Have Already Outsmarted the Competition

Recently, at a family member’s birthday party, my friend’s house keys went missing. We searched fruitlessly for an hour, killing the mood and ending the evening on a pretty low note.

While his keys were indeed lost (though found the next day), I felt a tad guilty knowing that something like that would probably never happen to me, at least not anymore. In a world full of iPhones, Apple’s new $29 device-tracking AirTags make it pretty darn hard to lose anything, accidentally or otherwise.

It’s difficult to find fault with Apple’s latest gadget; AirTags are simple, easy to use and easy to set-up. AirTags have already helped me locate my keys in the middle of a wooded New York campground, under my definitely clean pile of laundry and in a jacket I forgot I wore during a raucous night out. It’s all made possible thanks to smart design changes to iPhones and the sheer ubiquity and uniformity of iOS devices.

At first glance, the biggest problem might be losing the AirTag before you attach it to anything. The white button-like trackers are small, a little larger than a quarter, and you can “engrave” the white front of each AirTag with up to three letters or any emoji. (The emoji and text are all a dull grey color, so don’t expect any smiling yellow faces or brown poops on your AirTags.)

On the rear is a shiny removable backplate that lets you access the replaceable coin-cell battery, which should last around a year, according to Apple. That backplate won’t stay shiny for long, though. Like the backs of iPods past, you can expect all that knocking around in your pocket, purse or pet collar to leave a patina on your gadget.

If you’re hoping to keep track of your constantly disappearing keys, AirTags require a separate, expensive keychain accessory. (Tile, which has been in the business of helping users find lost items for years, has long featured products with an integrated keychain hole.) Apple has a small collection of expensive accessories into which you can slot your AirTags, ranging from a $13 Belkin-made key ring to a $449 Hermes luggage tag. After placing the AirTag in an accessory, you can put it anywhere you’d put a keychain.

Pairing AirTags is an absolute breeze, done in the Find My section within an iPhone’s settings. Assign a name and optional icon to the item you’re tracking and that’s it. From there, you can set up extras like custom messages to display should someone (with an NFC-enabled smartphone) find your AirTag and tap it with their phone.

Android users? You’re out of luck. Sort of. AirTags do work with Android devices, but lack many of the signature features that would draw one to purchase a device tracker like AirTags.

iPhones featuring a U1 Ultra Wideband chip (UWB), like the iPhone 11 and iPhone 12 models, feature improving item tracking to make it even easier to straight-up find a missing item. Using the UWB chip, an iPhone will display an arrow and estimated distance from your AirTag, literally pointing you in the right direction until you’re basically on top of your lost tracker.

Apple's AirTags are perfect on keys, bags, or anything else you don't want to lose.
Patrick Lucas Austin

Sure, other location-tracking accessories have existed for years, like Tile and its variety of Bluetooth trackers that fit in wallets, on keys and even built-in certain products from companies like HP and Fitbit. But Apple’s ecosystem provides a potential advantage with its already extant network of Mac and iOS devices that make it easier to locate an AirTag compared to a Tile tracker.

Here’s where Apple’s secret sauce comes into play: AirTags benefit from every iPhone functioning as a lighthouse for lost devices in the background automatically, whether you own AirTags or not, where other trackers depend on a network of opt-in users who also own a tracking device. Any lost AirTag detected by any iPhone will send a notification to your phone, showing you the AirTag’s last location. Apple says no personal data is shared with nearby iPhones, and that it all happens in the background, anonymously and encrypted. You can also opt-out of the Find My network should you choose.

“Your AirTag sends out a secure Bluetooth signal that can be detected by nearby devices in the Find My network,” according to the official Apple AirTag page. “These devices send the location of your AirTag to iCloud — then you can go to the Find My app and see it on a map. The whole process is anonymous and encrypted to protect your privacy.”

Though AirTags are a pretty impressive accessory that only Apple can make, Apple’s competition isn’t exactly happy about its deep AirTag integration. In January 2020, Tile urged Congress to investigate the iPhone maker, saying changes to iOS and the introduction of the UWB chip were part of its larger anti-competitive practices. Tile lacks access to the extensive network of iPhones and other devices on the Find My network, which could put Tile on equal footing.

Additionally, the National Network to End Domestic Violence warns that trackers can potentially be used to facilitate instances of domestic violence, by allowing someone to know the location of another without their consent or knowledge. They allege the same could be done with Apple’s AirTags, though Apple says it will notify a user should an AirTag not associated with them remain nearby for an extended period of time.

For iOS users that want something cheaper, which also takes advantage of Apple’s Find My network, the Chipolo item tracker exists, though it’s only a buck cheaper and lacks the UWB tracking feature found in AirTags.

Aside from potential privacy issues, there isn’t much to fault when it comes to Apple’s first go-round in the item-tracking department. Many iPhone users have already grown familiar with the general nature of the Find My service since the release of the Find My iPhone app released in 2010, and Apple aims to expand its usefulness, both with AirTags and third-party devices like the electric VanMoof bicycle. Apple’s got a pretty easy hit on its hands.

A single AirTag will run you $29, while a four-pack costs $99, reasonable prices for an accessory designed to track what one might consider irreplaceable items.

If you’re already planning a wild summer, add AirTags to the list of things you need to grab before you hit the beach or rooftop brunch extravaganza. And hey, Apple. Let’s get a key ring-bottle opener accessory already, eh? 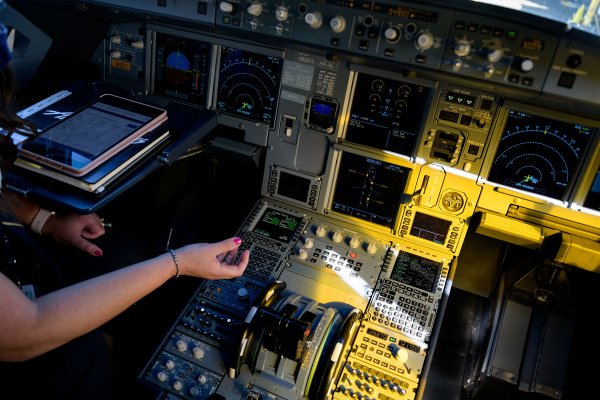 How Artificial Intelligence May Be Planning Your Next Flight
Next Up: Editor's Pick