How do you say goodbye after 22 years on air? As he gave his final goodbye on The Tonight Show on Thursday night, Jay Leno made it clear: He doesn’t like goodbyes, and he’s sad (OK, more than just sad) to be leaving the “best job in show business.”

As Leno reflected on his experience, he said the years he spent hosting the show were the greatest of his life. “I got to meet presidents, astronauts, movie stars… it’s just been incredible,” he said. He also thanked the audience for their loyalty and The Tonight Show crew for becoming like his family, especially since his mother, father, and brother all died within his first few years of hosting the show.

It was a heartfelt, tearful farewell—but as usual, there was plenty of playful banter and teasing as well. Leno’s guest of the night, Billy Crystal, was also his first-ever guest on the show, a fitting way to bring his hosting gig full circle.

Then perhaps the most surprising moment of the night: Kim Kardashian singing to a tune from The Sound of Music. In a surprise parody of “So Long, Farewell,” Kim was joined by Sheryl Crow, Jim Parsons, Oprah, Carol Burnett, and Jack Black.

Jimmy Fallon debuts as the new host of The Tonight Show on Feb. 17. “It’s fun to be the old guy and see where the next generation takes this great institution,” Leno said. He then ended by quoting Johnny Carson, wishing all “a heartfelt goodnight.” 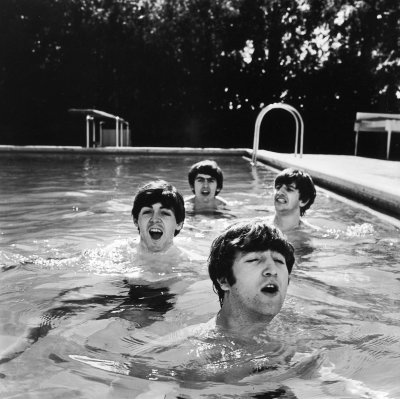 17 Quirky Photos of the Beatles You Probably Haven’t Seen Before
Next Up: Editor's Pick