As President Barack Obama was preparing for his 2012 re-election bid, he and his top aides kept returning to the question of the rights of Americans in same-sex couples to wed. Gay marriage was seen as a political loser among swing voters and Obama’s coterie of white-male campaign advisers considered it to be third-rail issue—touch it and die. Joe Biden, then Obama’s understudy as Vice President, had counseled the boss to worry about getting on the right side of history after he had won a second term. (Biden, of course, would blow up the plans Obama’s team had concocted for a six-month public evolution with an unplanned announcement of his own, saying committed couples had every right to be together, regardless of sexuality, on Meet the Press.)

The two-track posture is but one of the behind-the-scenes peeks included in journalist Sasha Issenberg’s insightful and breezy (even at more than 900 pages) new book, The Engagement: America’s Quarter-Century Struggle Over Same-Sex Marriage, published today and timed to the start of Pride. Tracing the evolution of both public opinion and politics around marriage equality, the work holds a mirror up to how much America has changed in a short period of time and how those in power actually followed the public embrace of same-sex marriage, rather than lead it.

I spoke on Friday afternoon with Issenberg by phone. Below is our chat, edited for clarity and concision. (Disclosure: I met Issenberg on the presidential campaign trail back in 2007 when he was writing for The Boston Globe and I for The Associated Press. We have been friends since.)

PE: What was the goal of this project?

SI: I wanted to tell the story of the whole marriage conflict and what happened over 25 years. There wasn’t a politician in the United States or gay-rights group in the country that would declare it an objective. It became something that was the dominant domestic cultural issue for the better part of a decade. And then basically it has disappeared from our politics as something we debate. And so it’s a political story and a legal story and a story of social change about how an issue can emerge and take over our politics in a way and then disappear.

PE: In retrospect, the history of this seems so obvious, that marriage was inevitable. But that wasn’t the case.

SI: The origins of this are accidental. From the long view, this was by no means inevitable. I talk a bit about the debates that took place within the gay-rights community through the 1980s about whether marriage was even a desirable goal. But what happened is a series of really peculiar local events in Hawaii. At that point, it becomes the opponents of same-sex marriage who really make this a national issue. Once the Defense of Marriage Act (DOMA) becomes law in 1996, introduced by Republicans in Congress and signed by Bill Clinton, it means it’s likely that this is going to come before the Supreme Court. That sets up a different type of political infrastructure about how this could be settled.

PE: Would the current members of the Supreme Court uphold the right to marriage as it exists today?

SI: I don’t know anybody who envisions a full-frontal challenge to that. It’s not entirely clear to me how you would even go about doing that and the court is very hesitant to directly overturn precedent, especially so quickly. The people who lost the battle over same-sex marriage are now pushing on religious-liberty cases that could end up dramatically circumscribing those rights. What we could have is a court that says you don’t have to treat all married couples the same if you have a good religious reason for not wanting to do so.

PE: I found it jarring to read the word ‘faggot’ in a government document in your book. It was a reminder that in my lifetime, the government was using that language. How do we reconcile how quickly we’ve come on this?

SI: That’s obviously the most egregious, jump-off-the page example of this. But you still had a committee report on DOMA that said that the reason for it was to express moral disapproval of homosexuality.

The best predictor of opinion on any gay rights issue—not just marriage—that pollsters ask is something like Do you have a friend, coworker or family member who’s gay? And when they first started asking that in the late ‘70s, it was pretty close to 0%. Now it’s pretty close to 100%. And there’s lots of research that people’s views on all sorts of questions about tolerance change once they know somebody who’s gay. We’ve lived through a generation where there’s been a cycle of people coming out that has created an atmosphere of tolerance. There’s been a culture that has created an atmosphere in which people feel comfortable coming out.

PE: This book was also a jarring reminder that a lot of the groups that we consider allies of the LGBTQ community were so reluctant to actually go all-in on this. How do we address that going forward?

SI: Some of it was strategic and tactical. There are very few prominent individuals or organizations that it looked like they were ahead of the curve on this. Some of them were really focused on incremental gains that they thought would be near at-hand, like domestic-partnership recognition or other types of family recognition. And then some of it is that these organizations in a certain respect have too broad of a mandate to be good on any one issue.

The Human Rights Campaign (HRC) is a sort of constant source and constant object of criticism. Activists think that they did not fight back hard enough against the Defense of Marriage Act because they had already endorsed Bill Clinton and had sort of given up a lot of their leverage against the White House. HRC is not really built to do state-level politics. They are a federal committee that was basically built to influence Congress. But they’ve also sucked up so much money that it makes it hard for robust state-level groups to get off the ground. We saw that HRC and the ACLU were doing what they were built for, and they were built for doing a lot of different things. And they made a series of trade-offs. It seemed reasonable that HRC looked at Capitol Hill and the White House in 1996 and said, We’re actually making some progress on other issues. So why pick this fight with people that we’ve to build relationships with?

PE: So what purpose does the Human Rights Campaign serve going forward?

SI: On some issues where the interests of the broad LGBT coalition are shared, something like the Equality Act, there still is a purpose or a group that’s built to gain influence with Congress and lobby members. We think of the LGBT coalition as a single unit, but the interests of gays and lesbians and transgender people are often quite different. We throw around the term ‘LGBT’ as a catchall a lot, but on the gay-marriage fight, it’s white men who were pushing marriage.

It would be hard to imagine on all these issues that a single organization could represent all of these separate constituencies like HRC has tried to do. When it was founded, I think the community of sexual minorities, as people sometimes called them in the 1980s, was small and discrete enough. Lacking any political organization, it made sense to try and consolidate power and money with a footprint in Washington.

PE: If I’m reading this correctly, the unifying factor that people rallied around was fear and repression. And in the United States in the year 2021, that is less pronounced now. How do you hold that coalition together? Is history enough?

SI: I’m skeptical it can be held together. You had these deep, often intense divides about fighting for marriage split lesbians and gay men. You go back into the 1980s and they had a very different set of concerns. So much of what we called LGBT family law at that point was being driven by women, by lesbian lawyers representing lesbian clients who’d been in heterosexual marriages and decided to come out, left their marriage and then had trouble getting access to their own biological children and needed to fight for that in court. Those female lawyers were shaped by the feminist thinking of the ‘60s and ‘70s. And they enabled suspicions of marriage as a heteronormative and patriarchal institution. To them, the idea that gays and lesbians should be fighting for inclusion and assimilation into that institution, which they believed had been structured to empower men at the cost of women, was unacceptable.

At the same time gay men were facing a set of family-law concerns in the ‘80s. They were driven by death and the challenges that came along with HIV/AIDS, stuff like hospital visitation and being able to transfer property… a very different set of sort of family-law priorities than the lesbian clients who were concerned with access to children. What ultimately brought gay men and lesbians together in the fight for marriage rights was the opponents wanted to deny it to them. Nothing unifies a coalition like the opponents.

PE: I’m struck by the pure cynicism among even some nominal allies of marriage equality. I’m thinking of Biden here specifically when he’s telling Obama: You can do that after you’re reelected. Or that meeting in the Roosevelt Room where Obama’s white men were strategizing how to get the President to yes on this. Does this still carry into leaders today?

SI: Obama ended up where he did because it was a safe place to land. One of the things that becomes clear in that book is that this is a story where politicians are largely followers of public opinion. The politicians who, in retrospect, you would think of as having acted most courageously were often the ones who did it under the radar. We got a bunch of state attorneys general who made decisions in their roles as the top legal officer of their states not to defend state laws banning same-sex marriage or to issue opinions recognizing gay marriages, even if the legislature hadn’t voted to do so. And they kind of could do that because they were not getting that much scrutiny for those administrative positions.

For so long Democrats were scarred by their interpretation of what had happened in 2004. People came out of that election saying that John Kerry lost because of gay marriage. God, gays and guns were the Democrats’ biggest Achilles heel with the national electorate. Over the course of Obama’s career, you see the center of gravity shift where a mainstream and ambitious Democrat is allowed to be on this issue. The best politicians are good followers. Look at Biden. He just has a very good nose for where the safe middle of his own party’s coalition is at any given point and has a willingness to do what it takes to end up there. 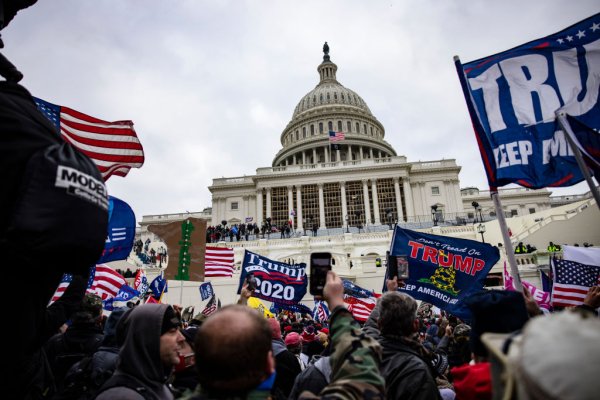 Republicans Sink Proposal for a Jan. 6 Commission
Next Up: Editor's Pick