From left: An undated portrait of Prince Hall; an illustration of Deborah Sampson circa 1797
The History Collection/Alamy; Hulton Archive/Getty Images
Ideas
By Craig Bruce Smith
Smith is a historian and the author of American Honor: The Creation of the Nation's Ideals during the Revolutionary Era. Follow him on Twitter: @craigbrucesmith. All views are those of the author.

We remember and memorialize those who have served in the U.S. Armed Forces. One of the more permanent and public memorializations of our veterans is by naming military bases (aka posts and forts) after them. But what about all of the bases named after Confederate traitors?

There are monuments to Confederate soldiers around the nation, from schools to government buildings to public squares. But they have been coming down in recent years as people are forced to grapple with the legacy of slavery. U.S. Army bases named after former enemies long stood firm as perplexing memorials. But this February, the eight members of the “Confederate Base Naming Commission” mandated by Congress, were tasked by Secretary of Defense Lloyd Austin and the House and Senate Armed Services Committee with stripping Civil War enemies’ names from ten U.S. Army posts found across the South. On May 21st, commission chair and retired admiral Michelle Howard announced the committee’s intention to visit the affected bases (and potentially expand the renaming process beyond bases) before submitting a final report in October. The crucial question: What names should replace them?

The American army was established in 1775 (predating the United States itself) and has no shortage of qualified candidates for the honor of enshrinement. Naturally, the base renaming should honor a diverse array of veterans from America’s many conflicts. Let’s start with the first veterans.

There are just under eighty active regular Army posts in the continental U.S., but currently only three are named for Revolutionary veterans: Alexander Hamilton (in New York), Henry Knox (in Kentucky), and Daniel Stewart (in Georgia). (Fort Monmouth, named after the 1778 battle in New Jersey closed in 2011, and Fort Jackson celebrates Andrew Jackson’s presidency rather than his adolescent role in the Revolution). So, only three to honor those who fought to create this nation? The Civil War (on both sides) has the largest representation in base names, but even the controversial Mexican-American War and Indian Wars have more than the American Revolution.

This Memorial Day, America can champion the Revolutionary concepts of liberty and equality by enshrining the names of two of its early Black and female combat veterans: Prince Hall and Deborah Sampson.

Why Hall and Sampson?

When the first shots of the American Revolution were fired at the Battles of Lexington and Concord on April 19, 1775, Black Americans were there fighting side-by-side with white Americans, and continued to do so throughout the duration of the war. There are many options for who to commemorate. Six different Prince Halls fought in the Revolutionary war, giving a future Fort Hall the widest representation. The most famous of the six, Prince Hall of Boston, gained his freedom in 1770 before serving as a soldier and early abolitionist. In 1777, Hall drafted a “Petition of Freedom” to the Massachusetts legislature that interpreted the Declaration of Independence as applying to more than propertied white men. All people, free and enslaved, Hall pronounced, “have in Common with all other men a Natural and Unalienable Right to that freedom…Bestowed equally on all mankind.” Hall’s legacy presents the uncontestable fact that General George Washington’s Continental Army was an integrated one—a rare phenomenon not replicated until after World War II. What better way to exorcise the Confederacy’s defense of slavery and the inequality of the Jim Crow-era than with the memory of one of America’s first abolitionists and first soldiers in its first multiracial army?

Women also played a major role in establishing American liberty, whether in boycotting British goods or by supporting the Continental Army behind the frontlines. Examples of women in combat however is rare. Yes, there is the near-mythical “Molly Pitcher,” who spontaneously manned a cannon out of necessity after her husband was struck down (probably a partly fictional combination of two women). Then there’s Plympton, Massachusetts-born Deborah Sampson. Sampson disguised herself as man, volunteered for the army, and proved herself in combat. Seeing action as a member of the elite light infantry, she was only discovered after being wounded in battle. Though female service in the army was forbidden, Sampson’s heroism earned her an honorable discharge conveyed by a General Henry Knox at West Point in 1783. She’s a real-life American Mulan, and her biography The Female Review was among the earliest ever written on an American woman. With female soldiers only being allowed to officially fight on the frontlines as of 2015, a Fort Sampson would offer a beacon to women in the current U.S. Army that their gender has been on duty since the beginning.

Critics may point out that Hall and Sampson are from Massachusetts, with no relation to these ten Southern installations. Admittedly, the naming of bases customarily has a local feel. But this is not a rule, and it was broken for the national importance of the American Revolution before when Fort Knox in Kentucky was dubbed after the Boston-born patriot and first Secretary of War. Still, beyond their own actions, Hall and Sampson are representative of the broader contributions of women and African Americans (free and enslaved) to American independence — regardless of where they lived. Their service illustrates that the Declaration of Independence’s promise that “all men” and women “are created equal” was embraced across society.

Naming Army bases after Hall and Sampson certainly won’t end the “history wars” over questions of the nation’s “true founding,” nor will it end the presence of racism or sexism in society. But just adding two names will signal to our military, our citizens, and the world that the American Revolution meant and continues to mean something. And it will clearly illustrate what ideals from the founding we choose to honor.

Today, we can remember that the founders are not simply the “Founding Fathers,” but all who contributed to the independence and creation of the U.S. In 1776, the nation was joined in a “common cause.” A politically divided America could use a reminder that the Declaration of Independence’s words matter and apply to all Americans. 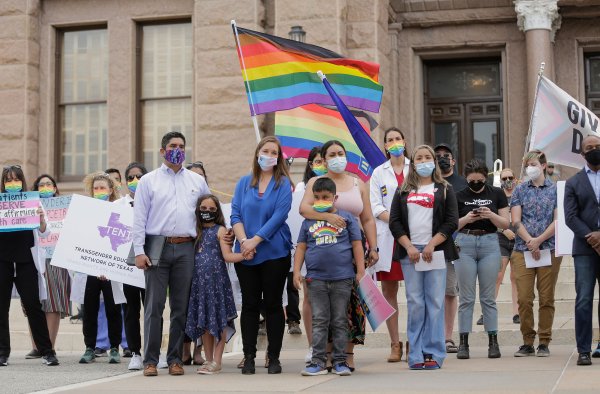 Why the Senate Needs to Pass the Equality Act
Next Up: Editor's Pick