America Could Soon Face a Wave of Single Moms Being Evicted. A Simple Solution Exists That Could Help Them

An eviction notice is posted and the lock is changed on a door in the unincorporated community of Galloway west of Columbus, Ohio on March 3, 2021.
Stephen Zenner—Getty Images
Ideas
By Lauren Sandler
Lauren Sandler is a journalist and the author of This Is All I Got: A New Mother's Search for Home and One and Only: The Freedom of Having an Only Child, and the Joy of Being One.

It will be the true measure of our society and the predictor of our future: Whenever the CDC moratorium on evictions expires – which it’s set to do next month — millions of people could find themselves homeless. And perhaps most heavily represented among those millions are single mothers and their kids.

These mothers are not numbers, they are people. People with names and narratives, with passions and ambitions. Data can tell us who is unemployed, who is on welfare, who is at risk for eviction, who is homeless. But it doesn’t tell us a person’s joys and traumas. Data is an aggregate of lives distilled into cold figures, devoid of humanity, of narrative, of individuality.

And yet the statistics of this pandemic year tell a staggering story. Women’s labor force participation has dropped to 57% since the pandemic began, and of all groups of parents, single moms have seen the biggest drop in the proportion who are employed. The service industry, a sector largely made up of women of color, shed more jobs than any other sector. Three-and-a-half million hospitality workers have found themselves without a paycheck, usually just minimum-wage one at that, meaning they were already living on poverty’s margins at best.

Pandemic life – with massive unemployment, Zoom schooling and social isolation — has brutalized no group as direly as the single mothers raising 15.76 million children. Lost jobs mean no money for rent, at least with our miserly welfare system. By August of last year, 30 to 40 million people were already at risk of eviction, and researchers have found that having children is a significant risk factor.

It didn’t have to be this way. It still doesn’t. For decades, researchers from the U.S. Department of Housing and Urban Development to Harvard have shown that vouchers providing rent payment are the most effective form of homelessness-prevention intervention. Families who receive vouchers are not only less likely to experience housing instability, they’re also less likely to need foster care. And they’re considerable less likely to experience domestic violence: four times as many housing-insecure women report abuse compared to those with greater stability. Despite all this, Section 8 program, which provides housing assistance to families, is severely underfunded.

When I was reporting my book This Is All I Got in a Brooklyn shelter for homeless mothers, I learned one thing for sure. As any of the women there could tell you, their foundational need is a place to live. Once you have a stable home, it becomes possible to survive, but without that stability, everything becomes so much harder.

For the past decade, the number cited to end pre-COVID-19 homelessness was $20 billion. Now, according to the Urban Institute, it would take at least $50 billion to keep families stably housed during the looming eviction wave. This year alone we will spend an estimated $934 billion on defense. Last year, during our grievous crisis, Jeff Bezos’s net worth gained $75 billion; he now has almost $200 billion. Elon Musk’s wealth rose $25 billion in a single day.

Every year, with no end in sight, wealth consolidates and poverty expands. This is the apocalyptic physics of inequality in America, now more than ever. We are defined by who we deem worthy of investment, as an economy as well as an ethical society. Today we are failing ourselves on both counts. That failure becomes increasingly villainous when you know simple solutions like housing vouchers exist to reverse the most dire foundational crisis for poor Americans.

During the early days of the COVID-19 crisis, commentators, business leaders, philanthropists and institutes, made commitments to forging new equity rather than “going back to normal.” Webinars and podcasts rang with intentions for radical humanitarian progress. The shock of mass unemployment, the awareness of crushing maternal burden, the fear of national poverty pointed to the possibility that Americans would never forget this awakening, that our ability to see each other in crisis meant we might care for each other in newly expansive and profound ways.

Such cries for reform are fewer and quieter, this vaccinated springtime. Unless we have the compassion to see housing as a human right and the will pay for it, for millions of children with no agency at all, and millions of mothers who are doing their Sisyphean damndest, the worst is soon to come. And as it usually is with preventable human suffering, it will be women and children first. 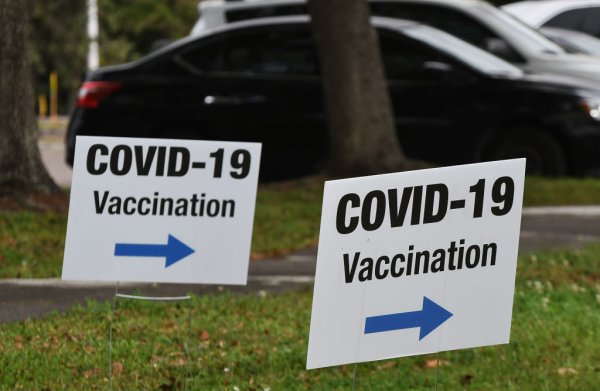 Why 'Breakthrough' Infections Even After COVID-19 Vaccinations Shouldn’t Be Surprising
Next Up: Editor's Pick