Iranian judiciary chief Ebrahim Raisi greets journalists as he arrives to submit his candidacy for Iran's presidential elections, at the Interior Ministry ahead of the presidential elections scheduled for June on May 15, 2021, Tehran, Iran.
Photo by Majid Saeedi/Getty Images
Ideas
By Ian Bremmer
Bremmer is a foreign affairs columnist and editor-at-large at TIME. He is the president of Eurasia Group, a political-risk consultancy, and GZERO Media, a company dedicated to providing intelligent and engaging coverage of international affairs. He teaches applied geopolitics at Columbia University’s School of International and Public Affairs and his most recent book is Us vs. Them: The Failure of Globalism.

This week, Iran’s government announced the seven finalists who will be allowed to compete in the country’s presidential election on June 18. The seven candidates to replace the term-limited incumbent president Hassan Rouhani are:

There are several reasons why this field of candidates has generated controversy both inside and outside Iran.

How does Iran’s presidential election work?

All democracies limit choices available to voters, but Iran’s “democracy” is more limited than most. Nearly 600 people registered as candidates with the Guardian Council, a 12-person body made up of jurists and clerics who answer to the country’s Supreme Leader, Ayatollah Ali Khamenei. The Council then decided that only the seven men listed above are qualified to run for president. On Thursday, the Supreme Leader endorsed the Council’s decision.

Among those excluded from the race are some familiar names. Former parliamentary speaker Ali Larijani was considered a serious challenger, and his brother, a member of the Guardian Council, has issued an extraordinary public protest against his exclusion. He wrote on Twitter that he has “never found the decisions of the council so indefensible.” Also excluded was lightning-rod former president Mahmoud Ahmadinejad.

Who is going to win?

You can ignore the first six names on that list above. They are small-time candidates chosen specifically to help Ebrahim Raisi win. Raisi is by far the best known of the contenders, and the fact that he’s personally close to the Supreme Leader will ensure he wins. Raisi can fairly be described as a “hardliner,” one of those Iranian officials who is openly hostile to the idea of deeper engagement with Western governments and who favors the strict application of Islamic law at the expense of personal freedom.

There are many reasons why Raisi remains a controversial figure in the West. The greatest is his role in the 1988 mass execution of political prisoners and militants in the closing days of the Iran-Iraq war. But as Iran’s chief judge, he also bears responsibility for the fact that only China executes more of its citizens each year.

What does all this tell us about Iran today?

The choice of these seven men is also controversial inside Iran, where voters who prefer candidates who champion greater individual freedom and more engagement with the outside world have been deliberately left without viable options.

It’s possible that Khamenei is grooming Raisi to succeed him as Supreme Leader. It’s impossible for outsiders to know the state of Khamenei’s health, but he’s now 82 years-old, and he’s been in power since 1989. Supreme Leaders are chosen by a group of clerics called the Assembly of Experts. Raisi serves as Deputy Chairman of that body.

The exclusion of any of the candidates with a chance of beating Raisi also tells us that the Supreme Leader will accept the embarrassment that comes with expected low voter turnout—Iranians critical of the Guardian Council’s decision have taken to Twitter with the hashtag #NoToIslamicRepublic—in exchange for a race without drama. Khamenei has asked Iranians to vote. “Dear nation of Iran, do not pay attention to those who promote (the idea) that voting is useless…The outcome of the election lasts for years…Participate in the elections.” This appeal will likely be ignored by an historically large number of people, particularly younger voters.

What about the nuclear deal?

Faced with extreme economic hardship in Iran, Raisi has echoed the Supreme Leader’s pronouncement that Iran’s leaders should not “waste a single moment” in their effort to remove U.S. sanctions. It’s not hard to understand why. In 2016, the first full year after Iran agreed to limits on uranium enrichment in exchange for sanctions relief, Iran’s economy roared back to life with a growth rate of 12.5 percent. But from the time Donald Trump was elected president and followed through on threats to withdraw the U.S. from the deal, Iran’s economy has been shrinking.

The numbers are dire. Iran’s inflation rate, a measure of real economic pain for Iran’s people, jumped from 10 percent in 2017 to 40 percent in 2019. It remains at about 30 percent. Unemployment hovers above 12 percent. COVID has only added to the pain.

That’s why a return to the nuclear deal remains likely later this year. Neither the Biden administration nor Iran’s government wants to be accused of giving too much to get a deal, but they both want an agreement. That will bring some relief to Iran’s long-suffering people as their government prepares in coming years for just the second transfer of power from one Supreme Leader to another in the 42-year history of the Islamic Republic.

Tehran has much more to offer than political intrigue. It remains a fascinating place to walk the streets, people watching and experiencing the bustle. Courtesy of Vice Asia, enjoy this search for street food through the famous Grand Bazaar. 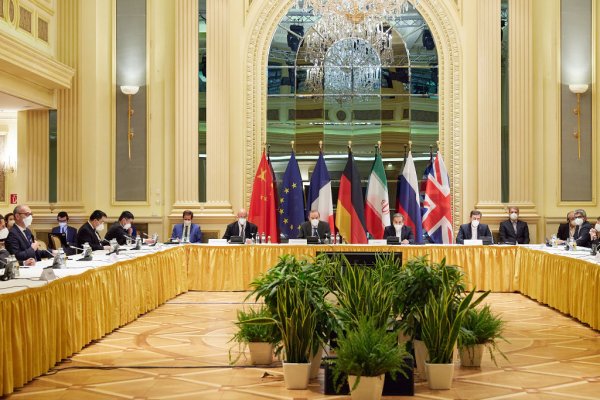 What Happens Next with Iran Nuclear Negotiations
Next Up: Editor's Pick