How TIME Chose Its 2021 List of Next Generation Leaders

I was catching up the other day with a friend, who asked how remote work had been going, and I mentioned that sometimes late in the day, when my youngest child has had it with the closed door in the attic office space I share with my wife, I slip into the kids’ backyard treehouse to finish my Zoom calls. We both laughed, and marveled at how much the pandemic had changed work and life. “I’m sure you’re the first editor of TIME to work out of a treehouse,” he said.

How much has changed? That’s the question Joanne Lipman explores this week, with cities and businesses across the U.S. finally beginning to reopen. Distancing and mask requirements are being loosened for vaccinated people (though of course it’s hard to tell who’s been vaccinated). Major companies from JPMorgan to Eli Lilly have announced near-term dates for office workers to start returning in person. The New York City subway roared back to pre-pandemic 24/7 hours in May. (The commuter service in my town outside the city starts back up in a few weeks, so we’ll see about the treehouse.)

“We have an unprecedented opportunity right now to reinvent, to create workplace culture almost from scratch,” writes Lipman, an author and former top editor at the Wall Street Journal and USA Today who wrote a best seller on workplace culture. Lipman reminds us that the modern worker-office relationship, having been created after World War II on a military model (“strict hierarchies, created by men for men, with an assumption that there is a wife to handle duties at home”), is seriously dated. As with much else post-pandemic, this “Great Reopening,” as Lipman puts it, presents us with a choice that is really an opportunity to define what the new normal becomes.

One of the joys of our work at TIME, especially in a year of so much hardship and despair, is the opportunity to elevate the people around the world who are building a better future. Since 2014, we have partnered with Rolex to shine a spotlight on Next Generation Leaders, rising stars in politics, business, culture, science and sports. Many may not be familiar names, at least not yet, while others are on the rise even as they have already crossed the threshold of fame. From this year’s group, for example, the acting of Anthony Ramos will be well known to fans of Hamilton and the writing of Akwaeke Emezi to lovers of The Death of Vivek Oji. Here, you can watch video profiles of Ramos, Emezi and everyone on this year’s list, which was overseen by senior editors Eliza Berman and Lily Rothman, with covers produced by senior photo editor Dilys Ng.

Looking back over the years at previous classes of Next Generation Leaders, it’s amazing to see not only the trails they had blazed when we put them on the list but also what they have since gone on to accomplish. When Simone Biles was featured in 2016, the gymnast had yet to make her Olympics debut. She took home four gold medals at the Games that summer, and just this May completed a Yurchenko double pike, a first in recorded competition for women (and rare for men). Also in 2016, we noted that biochemist Feng Zhang was helping to “launch a CRISPR revolution.” We knew that he was doing world-changing work in the exciting field of gene editing, but we couldn’t have predicted the key role that genetic-based approaches would play in the development of two of the most effective vaccines to fight the COVID-19 pandemic.

When the K-pop superstars BTS were featured in 2018, they were breaking into the U.S. market. Now, their Grammy-nominated English-language hit “Dynamite” has made them the first South-Korean band to top the American singles chart. The 2018 list also included the Weeknd, who headlined the 2021 Super Bowl halftime show. In 2019, we highlighted how legal scholar Lina Khan was changing the way Americans thought about Big Tech; in March, President Biden nominated her to the Federal Trade Commission. And Greta Thunberg, of the 2019 list, holds the distinction of being the only Next Generation Leader to go on to become TIME’s Person of the Year. So far, that is. 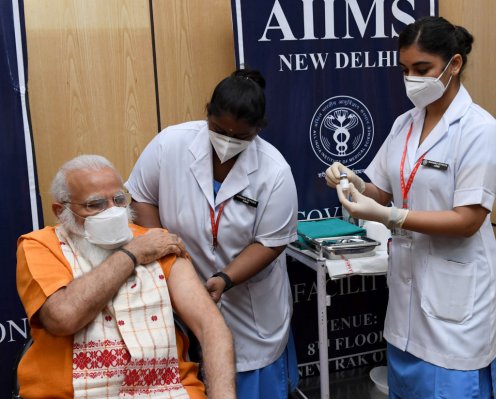