US President Joe Biden speaks on the economy at Cuyahoga Community College Manufacturing Technology Center, on May 27, 2021, in Cleveland, Ohio.
Nicholas Kamm/AFP—Getty Images
By Alana Abramson and Brian Bennett

Prodded by Jewish leaders concerned about rising anti-Semitic attacks, the Biden Administration has taken steps in recent days to combat the threat and douse simmering frustrations about its response.

The White House held discreet virtual meetings this week with Jewish groups, while the Department of Homeland Security (DHS) issued a notice to state and local police about the growing violence against Jewish people after 11 days of deadly conflict between Israel and Hamas.

The White House held two briefings with Jewish community leaders, which they did not publicly announce and ruled off the record. According to attendees, Second Gentleman Doug Emhoff, who is Jewish, kicked off one meeting by saying he has a personal stake in this issue. Emhoff stressed that the Administration “stands united against hate of any kind and is committed to combating anti-Semitism,” says a White House official. Officials from multiple White House offices also described how they are coordinating federal resources to combat the increase in violence against the Jewish community, and said they are currently in the vetting process to nominate a State Department Special Envoy to Monitor and Combat Anti-Semitism.

The meetings were scheduled after a public call for action. On May 21, five leading Jewish organizations—the ADL, the American Jewish Committee, Hadassah, the Jewish Federations of North America, and the Union of Orthodox Jewish Congregations in America—published a letter to Biden requesting he take six specific steps to combat the rising attacks: publicly condemn them; appoint a Special Envoy to Monitor and Combat Anti-Semitism at the State Department; re-establish the position of a White House Jewish liaison; convene a meeting with White House officials and Jewish leaders to discuss anti-Semitism; preserve former President Donald Trump’s 2019 executive order classifying anti-Semitic discrimination as a violation of Title VI of the 1964 Civil Rights Act; and provide funding to enhance security at religious institutions.

Three days later, both Biden and Harris had issued tweets condemning the violence, and the White House Office of Faith-based and Neighborhood Partnerships set up the two Zoom meetings. The first was held on May 24 with representatives of the letter’s signatories to discuss their specific requests, and the second on May 26 with a broader group of over four dozen leaders from the Jewish community, according to attendees.

Attendees said they were encouraged by the Administration’s expressed commitment to funneling government resources towards combating anti-Semitism—even if they felt it took some public prodding to get them there.

“We felt heard,” says Karen Paikin Barall, the Director of the Government Relations Office at Hadassah. Former Democratic Congressman Steve Israel, who attended the May 26 meeting, said officials took nearly a dozen questions from attendees and made clear that the Administration has created “an all hands on deck, interagency response to anti-Semitism.”

DHS officials also briefed security directors across the Jewish community in the U.S. on steps that can be taken to protect community centers and houses of worship, according to White House Press Secretary Jen Psaki. On May 26, DHS officials sent a public safety notification to state and local police highlighting the spate of violent criminal attacks against Jewish individuals, vandalism and hate crimes against Jewish facilities. The DHS bulletin, reviewed by TIME, said that racially motivated hate groups use moments of heightened tension to encourage attacks.

DHS said that the spike in attacks hasn’t been linked to a coordinated effort by international or domestic terror groups, but warned that “online communications linked to Foreign Terrorist Organizations have been exploiting the conflict between Israel and Hamas by calling on their supporters located in the United States to conduct attacks.” In addition, DHS officials have held online information sessions with Jewish organizations on ways to apply for federal funding through the Nonprofit Security Grants Program designed to help strengthen security measures, said a White House official.

According to preliminary data the Anti-Defamation League released on May 20, reports of domestic anti-Semitic incidents increased by 75% during the 11-day conflict between Israel and Hamas, from 127 in the two weeks preceding the fighting to 222. Many of the incidents, according to the ADL’s data, stemmed from individuals targeting Jews because they were angered by the Israeli government’s treatment of Palestinians. According to the Gaza Health Ministry, Israel’s military assault on Gaza killed more than 200 Palestinians, including at least 60 children.

Jonathan Greenblatt, the CEO of ADL, said that it’s typical to see an uptick in anti-Semitic attacks after a spate of violence in the Middle East. But this time, he says, “We’re not seeing an uptick; we’re seeing a tidal wave.” Greenblatt said social media is amplifying the hatred: ADL found that between May 7 and May 14, there were 17,000 tweets that included a variation of the phrase “Hitler was right.”

Privately, some Jewish leaders are still frustrated the Administration hasn’t done more to publicly counter the rise in anti-Semitism or appoint government officials to tackle the problem. Neither Biden nor Harris recorded remarks for a virtual rally the Jewish community organized on May 27 to condemn anti-Semitism, despite a request from the ADL. Senate Majority Leader Chuck Schumer, Senate Minority Leader Mitch McConnell, House Speaker Nancy Pelosi and House Minority Leader Kevin McCarthy all spoke, while the White House was represented by senior adviser Cedric Richmond. And some Jewish leaders, while pleased with this week’s virtual meetings, were quietly vexed that it took a public letter to propel the issue up the Administration’s agenda.

“I don’t know the meeting would have happened without the letter,” says Holly Huffnagle, the U.S. Director for Combating Anti-Semitism at the American Jewish Committee. Huffnagle emphasized that she was grateful for the Administration’s response. But, she added, “You would think there would be this ‘aha’ moment about anti-Semitism in America … It’s always like, why do we have to ask?”

White House officials note that Biden has spoken out about anti-Semitism for decades. Biden “recognizes this is a persistent evil that always deserves our attention and efforts,” Psaki said in response to a question from TIME during a press briefing on May 25. Biden signed into law the COVID–19 Hate Crimes Act on May 20, a law targeting anti-Asian violence during the pandemic as well as hate crimes more broadly.

Still, other leaders are still waiting to ensure the rhetoric condemning the attacks spurs actual policy changes, whether through swift confirmation of new government officials focused on the problem or procuring more funding for security. “Statements are important,” says Nathan Diament, Executive Director for Public Policy for the Orthodox Union, who attended these week’s meetings, “but they are not sufficient.” 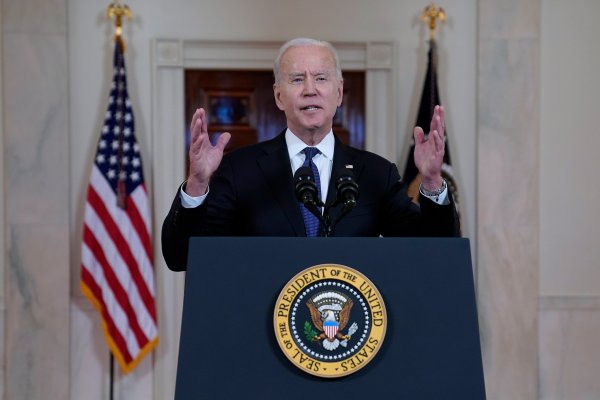 How Joe Biden Became the Stay-Out-of-It President
Next Up: Editor's Pick