Amazon Prime Video will be able to grow its video library rapidly with the acquisition of MGM Studios, announced Wednesday
Photo Illustration by Rafael Henrique/SOPA Images/LightRocket via Getty Images
By Abby Vesoulis

Imagine you invite friends over for a movie night on a new flatscreen TV purchased on Amazon Prime. The gathering is last minute, but the television was delivered to you in two days through Amazon’s speedy fulfillment services. You swing by Amazon-owned Whole Foods to get some snacks and pizza beforehand, which you’ll get a discount on because you’re a Prime member. When your friends arrive, you may stream some tunes on Amazon Music via your Amazon Echo speaker, and then queue up the thousands of movie options on Amazon Prime Video. Before finalizing the selection, your friends compare movie reviews on IMDB, an Amazon subsidiary since 1998.

This is all presently possible, and in the near future, Amazon may control an even greater chunk of your movie night. The retail giant is purchasing MGM Studios from a group of private equity firms in an $8.45 billion dollar deal, announced Wednesday. The acquisition will help Amazon better compete with streaming giants like Netflix—which relies on Amazon Web Services, a cloud platform, for nearly all of its content storage space—by giving Amazon access to MGM’s catalog of more than 17,000 TV show episodes and 4,000 movies, including classics like The Pink Panther, Rocky, and the James Bond series. (Existing licensing and streaming rights will likely prevent swaths of the MGM library from ending up on Prime Video for now.)

That’s a future that has lawmakers on both sides of the aisle concerned. In recent years, major companies in various sectors have drawn a critical eye from leaders who worry their power has grown unchecked in the absence of substantive revisions to antitrust laws in the last 100 years, resulting in a concentration of market power in the hands of just a few large corporations. The number of companies dominating the media and entertainment landscape, for example, decreased from roughly 50 in 1983 to less than a dozen by the late 1990s, according to researcher B. Rajesh Kumar. This trend has continued in recent years, resulting in more than $700 billion worth of media mergers and acquisitions since 2014, according to a Deloitte report.

Industries controlled by a small number of behemoths tend to be less competitive, which is bad for consumers, lawmakers and regulators say. Amazon’s purchase of MGM—the second largest acquisition in the company’s 26-year history—is particularly worrisome to legislators apprehensive of the swift ascension of Big Tech, renewing calls from Democrats and Republicans alike to reinforce antitrust laws.

“Big Tech companies with extensive monopoly power, such as Amazon, have continued to expand through acquisitions of smaller competitors, such as MGM. The FTC has failed to strongly enforce antitrust laws or hold offenders accountable for the past decade. This hurts competition and consumers,” Republican Rep. Ken Buck of Colorado told TIME in a statement. “It’s critically important that our laws prevent companies like Amazon from engaging in anticompetitive behavior.” He said he plans on introducing legislation that “brings stricter scrutiny on mergers from monopoly companies.”

Ramifications of the MGM purchase could extend far beyond Amazon. Some lawmakers are pushing for stricter standards guiding which types of mergers are legal and increased funding for the Justice Department’s Antitrust Division and the Federal Trade Commission to monitor consolidation efforts and enforce antitrust rules. These changes could make it harder for all major companies—from Apple to Walmart—to make consolidation moves that decrease market competition, such as buying up competitors.

The movement in Congress to go after Big Tech had already been accelerating before the announcement of the MGM deal. In October, the Antitrust, Commercial, and Administrative Law Subcommittee of the House Judiciary released a 450-page report criticizing the unfettered growth of major tech companies into new sectors and warning of the threats they pose after a 16-month investigation. While the report was authored by Democrats who control the lower chamber, some Republicans, including Buck, agreed with some of its key recommendations.

One section of the report concludes that “Amazon expanded its market power by avoiding taxes, extracting state subsidies, and engaging in anticompetitive conduct—tactics that have given the company an unfair advantage over actual and potential competitors.”

Rep. David Cicilline, chair of that subcommittee, told Axios in March about plans to introduce a series of antitrust bills targeting Big Tech in May. “My strategy is you’ll see a number of bills introduced, both because it’s harder for [the tech companies] to manage and oppose 10 bills as opposed to one,” he said.

When asked for comment, Cicilline’s office did not provide an updated timeline on when he might release these bills, but Democratic Sen. Amy Klobuchar and Republican Sen. Josh Hawley have each introduced their own pieces of legislation targeting antitrust enforcement in the last year, while state attorneys general have launched a string of antitrust challenges against tech giants. In 2020, separate groups of state attorneys general went after Google for allegedly running an illegal digital-advertising monopoly, and Facebook over accusations it was illegally stifling competition. Just this week, Washington D.C. Attorney General Karl Racine filed an antitrust complaint against Amazon (unrelated to the MGM deal), alleging the company illegally maintained monopoly power by preventing third-party sellers from selling their products elsewhere for lower prices, hindering competition and resulting in higher prices everywhere. (Amazon says sellers set their own prices and that the relief sought by the suit “would force Amazon to feature higher prices to customers.”)

With the MGM purchase, Amazon will be able to expand its existing Prime Video library and produce spin-off series from famed franchises to which it will now own the rights. Though Amazon already produces its own content like hit series Transparent and The Marvelous Mrs. Maisel out of its Culver City-based Amazon Studios, there is new impetus for streaming platforms to own and create original works as major networks begin to house their content on their own streaming services, such as Disney+ and NBCUniversal’s Peacock. “The real financial value behind this deal is the treasure trove of [intellectual property] in the deep catalog that we plan to reimagine and develop together with MGM’s talented team,” Mike Hopkins, senior vice president of Prime Video and Amazon Studios, said in a statement.

This isn’t the only consolidation happening in the entertainment space. AT&T recently announced that it would spin off WarnerMedia and merge it with Discovery Inc. in a $43 billion deal. Too many of these consolidations could eventually decrease the quality of content for consumers and the competitiveness of rates for the content creators, says Diana Moss, president of the American Antitrust Institute. “All the writers are now dealing with evermore powerful buyers of their content,” she says. “That will be bad for competition and for consumers. So any antitrust investigation would have to look at that effect on writers and creators and also on the consumer side.”

All of which serves as “a reminder of why we need to fund our antitrust agencies so they can take on investigations of multi-billion dollar deals,” Sen. Klobuchar said in a statement. “Our government cannot ensure major corporations are playing by the rules if enforcement agencies are chronically underfunded.” National antitrust laws that oversee mergers and acquisitions like these haven’t been revised in earnest since laws were passed between the late 1800s and early 1900s in response to trusts like Standard Oil Company and the American Tobacco Company gaining near-total control over their respective commodities, and since the 1970s and 1980s, courts have narrowed their scope by centering mergers’ effects on consumer welfare as the main antitrust policy goal.

With President Joe Biden’s recent appointment of Tim Wu, a Columbia University law professor and outspoken Big Tech critic, to the National Economic Council, and his nomination of Lina Khan, an associate law professor at Columbia and author of a widely read 2017 Yale Law Journal submission entitled “Amazon’s Antitrust Paradox”, to serve on the Federal Trade Commission, some antitrust advocates are cautious but optimistic that real reform is on the horizon.

“The administration believes that there are significant problems of market power in the economy that are particularly acute in tech,” says Sarah Miller, the executive director of the American Economic Liberties Project. “Our hope would be that this [MGM] merger invites a significant inquiry from antitrust enforcement agencies. In the meantime, we see the potential for bipartisan momentum in Congress.”

Not everyone is so sure passing major antitrust reform is feasible considering the barriers to advancing bills through an evenly split Senate while other pressing pieces of legislation, such as infrastructure and police reform, are taking up Congress’ oxygen. Though parties from both sides of the aisle have introduced bills targeting antitrust, some experts contend different motives are driving them. “My view is that GOP interest in reining in the power of digital platforms is based more on politics than on economics or political economy. It’s based largely on the argument that the platforms are left-leaning, they’re more progressive, and they are moderating content—especially political content—on the platforms,” says Moss. “That is not enough to generate bipartisan support for substantive meaningful reform.”

Whether she’s right may determine how many more pieces of your life—whether it’s movie nights, or health commerce, or automobile manufacturing—flourishing companies like Amazon can control in the years to come. 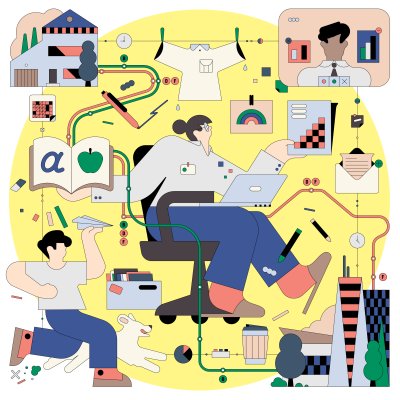 The Pandemic Revealed How Much We Hate Our Jobs. Now We Have a Chance to Reinvent Work
Next Up: Editor's Pick