From AIDS to COVID-19, America’s Medical System Has a Long History of Relying on Filipino Nurses to Fight on the Frontlines

Hundreds of nurses arrive at the Araneta coliseum in Manila, 02 October 2007 to attend official oath taking ceremonies after passing the June 2007 government licensure examination, where 31,275 successful examinees from the more than 64,000 passed the tests conducted nationwide.
ROMEO GACAD—AFP/Getty Images
By Paulina Cachero

In the early days of the pandemic, Susan Castor, a 64-year-old Filipino American nurse, would make her rounds taking care of patients at a transitional care unit at Community Medical Center in Toms River, N.J., wearing only a standard surgical mask, due to a nationwide shortage of PPE. Then, a patient from her unit tested positive for COVID-19.

By April 7, 2020, Castor began feeling dizzy and weak. Three days later, she lost her sense of smell and tested positive herself. Fortunately, Castor recovered after contracting the novel coronavirus—but countless other Filipino health care workers have not.

The coronavirus has taken a devastating toll on Filipino nurses battling COVID-19 in the U.S. According to National Nurses United, as of April 2021, 24 percent of the nurses they surveyed who died from COVID-19 complications were Filipino; but, Filipinos only make up 4 percent of the total registered nurses in the country.

It isn’t the first time that migrant Filipino nurses have been on the frontlines of hospitals and emergency rooms in America. After the U.S. colonized the Philippines in the late 19th century, the country has relied on Filipino health care workers to mend the staffing gaps in America’s patchwork health care system, especially in times of medical crisis. Since 1960, over 150,000 Filipino nurses have migrated to the U.S. In 2019, one out of 20 registered nurses in the U.S. was trained in the Philippines.

The history of how migrant Filipino health care workers came to play such an integral role in the U.S. medical system is a complicated story. During this Asian American and Pacific Islander Heritage Month, many historians joined Jurado in speaking with TIME about how their crucial involvement shaped America’s health care system through the 20th century to the present.

In 1898, the U.S. bought the Philippine archipelago from Spain at the end of the Spanish-American War as a part of the Treaty of Paris. In an attempt to win the favor of the Filipino people and ease the transition of power, President William McKinley claimed the colonization of the Philippines was a “benevolent assimilation,” assuring a full measure of individual rights and liberties.

“These westernized hospitals and nursing schools were part of a policy of ‘benevolence,’ but it obscured an unequal history. Part of the justification of Americans being in the Philippines was because they were ‘civilized,’ and Filipinos were ’uncivilized’,” says Catherine Ceniza Choy, a professor of ethnic studies at UC Berkeley and author of Empire of Care: Nursing and Migration in Filipino American History.

During this period of American colonialism in the Philippines, visas to go to the U.S. were limited. However, elite groups of Filipino nurses managed to travel to the U.S. to further their training, creating an association of prestige and socioeconomic mobility with practicing in America. Upon returning to the Philippines, according to Jurado and Cheniza Choy, the nurses cemented their status by replacing American nursing supervisors and other faculty at training hospitals and colleges for nursing.

In 1948, the U.S. established the Exchange Visitor Program (EVP) inviting foreigners to temporarily study and gain work experience in the U.S., and only allowing participants to stay in the country for a maximum of two years. Cheniza Choy says the Cold War program aimed to encourage participants to take American culture and ideology back to their home country. The program’s launch also coincided with U.S. nursing shortages after World War II—while hospital administrators claimed many quit to stay home and care for their families, nurses cited low wages and deplorable working conditions as the reason for leaving. American hospitals struggling with staffing utilized the EVP to sponsor Filipino nurses to fill the deficit. In 1965, the passage of the Immigration and Nationality Act (INA) granted migrant nurses the opportunity to petition to stay in the country permanently.

“U.S. hospitals specifically looked for Filipino exchange nurses because they had been trained in an Americanized nursing curriculum and work culture. And they were also fluent in English as a result of American colonial education and legacy,” Ceniza Choy tells TIME.

The INA coincided with a growing need in the American medical system for nurses. Professions like nursing and education were traditionally thought to be jobs for women—but as the Women’s movement took hold of the country in the late ’60s, American women had opportunities to pursue careers outside of the traditionally gendered professions, says Ceniza Choy. Additionally, the demand for health services skyrocketed as more people became eligible for care with the passage of Medicare and Medicaid in 1965. In 1966, 19 million Americans enrolled in Medicare alone.

By 1967, with more paths to work in the U.S. available, and the American medical system under greater strain, the Philippines became the global leader in exporting nurses to the U.S., according to Jurado.

In 1970, an immigration amendment allowed foreign workers to use an H-1 visa (working visa) for temporary employment, leading to recruitment agencies jumping on the opportunity to place even more overseas Filipino workers in the country. From 1972 to 1978, 60% of all nurses who entered the country using H-1 visas were educated in the Philippines.

The nursing pipeline from the Philippines to the U.S. was further solidified as the Philippine government capitalized and facilitated the export of Filipino medical workers.

‘Nursing is a passport to economic progress’

Thanks to the vestiges of the U.S. colonial education system, many Filipinos had grown up learning about American culture and ways of life despite having never been to the country.

The enactment of the INA also overlapped with high unemployment nationally in the Philippine archipelago creating an economic incentive to seek a higher salary abroad. After the Philippines gained independence in 1946, economic development languished and was crippled by cronyism and corruption, causing the Philippine peso to drop in value throughout the mid- to late-20th century.

“There was an economic promise in coming to the U.S. that you would improve the livelihood of many,” says Jurado. “It is a passport to economic progress.”

Former Philippine President Ferdinand Marcos, who held office from 1966 to 1986, saw the demand for Filipino nurses as a “market [the Philippines] should take advantage of.”

According to Jurado, Marcos believed money sent from overseas workers would help build the nation’s economy. Pocketing significantly higher pay compared to their counterparts working at domestic hospitals, Filipino migrant nurses in the U.S. often send money home to support families in the Philippines—a practice that continues today. Remittances from overseas workers boosted the economy from approximately $290.8 million in 1978 to US $10.7 billion in 2005. In 2017, the Bangko Sentral ng Pilipinas reported that the $31.29 billion personal remittances sent accounted for 10% of gross domestic product (GDP) and 8.3% of gross national income (GNI).

Under Marcos, the government established the agency that would later become the Philippines Overseas Employment Administration (POEA), which provided contract labor to foreign employers, institutionalizing and capitalizing on the overseas employment of Filipino health care workers, domestic workers, seafarers and more. Private recruiting agencies also emerged to help recruit labor for employers in other countries.

Alleging threats of communist subversion and “insurgency,” Marcos instituted national martial law in 1972 that would last 14 years. Even more Filipinos took advantage of the INA and EVP programs to escape the country’s political instability.

“During the long Marcos regime there was a speech he made, where he said, ‘If America needs thousands of nurses, we will give them more thousands of nurses—we will produce more for them,” says Jurado. “He was instrumental in Filipino nurses being celebrated as heroes. Because of their remittances in the Philippines, they made the lives of their families better.”

Marcos and his family fled the Philippines in 1986 in what would be known as the People Power revolution, leaving behind one of the largest labor export economies in the world. As Filipinos continue to work overseas separated from their families for months, even years at a time, many have criticized the emotional and social costs.

While America has relied on Filipino health care workers to heal its citizens, American medical facilities have not always treated their Filipino workers in kind. Since the 1960s, the U.S. medical system has had a “historical pattern” of turning to Filipino nurses to work at understaffed hospitals, particularly during health crises, says Ceniza Choy.

During the 1980s HIV/AIDS epidemic in the U.S., some American-born health care workers publicly refused to treat AIDS patients. The American Medical Association made a statement on AIDS in 1986 which even permitted physicians who were not “emotionally able” to care for AIDS patients to refer them to other physicians. Filipino nurses, including Jurado, migrated to fill the gaps left by domestic nurses. From 1980 to 1990, the Filipino population in the U.S. soared from 774,652 to 1,406,77.

Filipino nurses have faced exploitation and wage discrimination—a long history that persists today. Jurado says fraudulent recruiting agencies and even some American health care facilities have lured Filipino nurses with false promises of opportunities or higher pay, and later forcing them to work long hours in unsafe working conditions, sometimes with threats of revoking their visas. In 2019, 200 Filipino nurses won a human trafficking lawsuit in which they alleged that the owners of a group of New York nursing homes were not paid the wages promised in their contracts and were forced to work in unsafe conditions with inadequate staffing.

To this day, foreign-educated nurses are frequently sent to hospitals where it is difficult to recruit American-born nurses, including public hospitals in inner cities and health care facilities in rural areas that are frequently understaffed and under-resourced.

“These physicians and nurses work in communities with workers that are the essential workers who don’t have these white-collar protections. And they’re working in hospitals that don’t have all the equipment,” says Eram Alam an assistant professor in the history of medicine at Harvard University. “All of these things are working together, and I think all of these things are suggestive of who is considered to be disposable in the United States.”

While these placements create an unequal system for health care workers, these conditions have proved to be fatal in the COVID-19 pandemic. The lack of PPE compounded by the fact that Filipino nurses frequently work in bedside care and critical care units put them at higher risk.

“We run the risk of being exposed or even perhaps overexposed, because of where we work,” says National Nurses United co-president Zenei Cortez. “The other thing that I would attribute to the high rates of Filipino Americans falling victim to COVID is our culture: we treat our patients like they are our families. We are so dedicated and we stay over and that puts all of us at a higher risk of exposure.”

Castor echoed Cortez’s sentiments about the dedication of Filipino nurses in the country, noting that she knew several Filipino nurses who left retirement to help battle COVID-19. And for Castor, despite knowing that the patient in her unit could be positive for COVID-19, she was determined to get the patient the care they needed.

“Others will turn their back just because they are afraid and they don’t want to do it, but Filipinos face the challenge and help out until the end,” says Castor. “Even with COVID, we will still serve because that is our passion.” 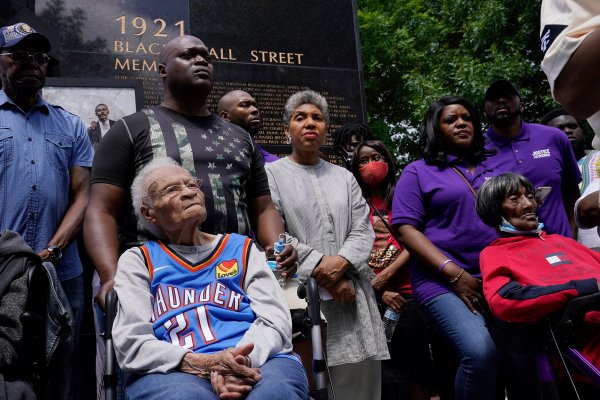 Breaking the 'Curse' of the Tulsa Race Massacre
Next Up: Editor's Pick