Eight Women’s Names Are Among the Thousands on the Vietnam Memorial Wall. Here’s What to Know About Them

Second Lieutenant Elizabeth Ann Jones’ mother had recently mailed a wedding dress to her in Vietnam. Jones, whom a neighbor told the Associated Press had a “zest for life,” was planning to marry a man she had met after arriving months earlier to serve as an Army nurse. But on Feb. 18, 1966, Jones and her fiancé were both killed in a helicopter crash near Saigon. Her colleague, Second Lieutenant Carol Ann Drazba, also perished. The two women, both 22, were the first American female service members to lose their lives in the Vietnam War.

Over the course of that conflict, eight American women service members lost their lives. But, even as Americans pause on Memorial Day to remember those who have been killed in combat, the sacrifices of women service members have often been obscured. They may be fewer in number than their male counterparts, but what they faced in Vietnam was no less serious.

“We were definitely in combat zones. We were rocketed and we were mortared, and we were injured, and some died,” says Diane Carlson Evans, founder of the Vietnam Women’s Memorial. (Her story will be featured in a tribute concert this Sunday on PBS). Evans spent years fighting for an additional statue on the National Mall to honor the women who served in that conflict; it now stands as a reminder that “women, too, have sacrificed and contributed.”

Jones and Drazba, like the rest of the estimated 11,000 women who served in the American military in Vietnam, did not have to be there. But even though women were not conscripted, many felt compelled to help those who were fighting and suffering injuries. On paper, their roles kept them away from the front lines, but Vietnam was a war without clear distinctions on where that zone was. Increased utilization of helicopter transport meant the wounded made it to an operating room sooner, but close proximity also put nurses within range of hostile fire.

In the early morning hours of June 8, 1969, an enemy attack claimed the life of First Lieutenant Sharon Lane, 25, at her hospital in Chu Lai. Jane Carson, a retired colonel who was then head nurse of Lane’s ward, was getting ready for work when the rocket hit the center of their ward. Shrapnel hit Lane, killing her instantly.

“Everybody was in a state of shock that we had lost somebody right in the middle of our hospital compound and couldn’t save them,” says Carson.

Before her death, Lane had asked to remain in the Vietnamese ward, where both civilians and POWs were treated. “She was a very kind, gentle person, and she had a lot of empathy,” Carson recalls. A foundation named after Lane built a clinic near Chui Lai in tribute.

Reflecting on her own decision, Carson does not regret going—but says, “I had no idea, none of us did, what we were getting into.”

Even so, Second Lieutenant Pamela Donovan, 26, was determined to get to Vietnam. She had become the only member of her Irish immigrant family to obtain U.S. citizenship, enabling her to serve in the Army. Her father later told the Boston Globe that she was “very touched by what she saw happening in Vietnam on the news and was not at all frightened to go there.” Shortly after she arrived, an illness claimed her life on July 8, 1968.

Captain Eleanor Alexander, 27, joined the Army after assurances that they would send her to Vietnam. But once there, she was restless working in the relative calm of a Qui Nhon hospital and sought a temporary transfer to Pleiku to be near the fierce fighting of the Battle of Dak To. Alexander wrote to her family that “for the past three days I’ve been running on about four hours sleep…I love it.”

Her letters, which were later excerpted for a newspaper article in her home state of New Jersey, took on a more serious tone as the days wore on. “Don’t worry if you don’t hear anything from me too often,” she wrote on Nov. 24, 1967. “It’s going to be a trying time up here.”

Six days later, Alexander and Hedwig Diane Orlowski, a 23-year-old Army first lieutenant, were killed when their plane crashed into a mountainside on their return flight.

The telegram Orlowski’s parents received erroneously notified them of their son’s death, something Evans says deeply upset the family. Orlowski’s friend Penny Kettlewell, who spent late nights talking with Orlowski about their patients, told the New York Times she tried to hold a remembrance for Orlowski, but her efforts were brushed aside by her supervisor. “She said women don’t die in Vietnam,” Kettlewell told the Times in 1993.

For most of the women who disproved that statement, Vietnam was their first wartime assignment, but Lieutenant Colonel Annie Ruth Graham, highest-ranking among them, was a seasoned veteran who had served during World War II and the Korea War. She was planning to retire after more than two decades of service, much of it spent far away from her large, close-knit family in North Carolina. On her final assignment, Graham suffered a stroke and later died at the age of 51 in August of 1968.

In a sad coda to the war, Operation Babylift began to evacuate hundreds of South Vietnamese children in the spring of 1975, before the fall of Saigon. Among those on board an overcrowded cargo plane that crashed into a rice paddy shortly after takeoff on April 4, was Captain Mary Therese Klinker, 27, of the Air Force. A posthumous citation says she tended to a passenger with a decompression injury before the impact that took her life.

Their purpose in going to Vietnam was to heal, but nurses also had to cope with the losses they could not prevent. Evans vividly remembers one mortally wounded man, heavily bandaged and unable to speak, who squeezed her hand to indicate he that could hear her. Evans sat with and comforted him until he passed away. Young nurses cared for young soldiers—and the perils of the war did not discriminate between them.

The decision to be placed in harm’s way, made by each of these eight women who did not come home, meant that others could. In a testament to Carol Ann Drazba’s care, Johnny Williams, whom she treated after an ambush left him severely injured, sent flowers to her mother every year until he passed away.

Their names are etched among the more than 58,000 names on the Vietnam Memorial Wall in Washington, D.C. As Evans says of the women who served, “if it wasn’t for us, that wall would be much higher and much wider.” 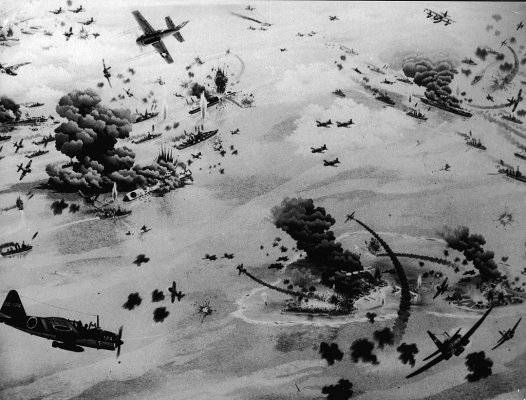 The Biggest Myths About WWII, According to a Historian
Next Up: Editor's Pick