While a certain amount of drama out in the luge or out on the ski slopes is to be expected during the next few weeks, the 2014 Winter Olympic Games aren’t just about the vicissitudes of competition.

They’re also about what has come to be known as “Sochi Problems” — all those embarrassing snafus that happen behind closed—er, broken—doors:

U.S. Olympic bobsledder Johnny Quinn was taking a shower in the notoriously rickety Sochi hotel rooms when he got stuck with no phone or way to call to help. Yep, those hotels that were just barely finished along with the rest of Sochi’s facilities at massive overrun costs. Maybe the hotel’s flimsy door—is that cardboard in there?—actually saved the day.

Zden Charo, Slovakia’s 6-foot-9 professional hockey player will probably need a good night’s sleep before his country’s Feb. 13 match versus the United State, but it doesn’t look like that’s going to happen. This is his bed:

Finally, there was last night’s brief debacle at the opening ceremonies, which besides being really beautiful, had one glaring error: one of the five snowflakes meant to mean materialize into a ring didn’t actually the Opening Ceremonies. But never fear! Russian TV took footage from the rehearsal to smooth over the mistake.

Here’s to smoother sailing for the athletes who made it out of their bathrooms and onto the course, slopes, track, luge, sled, or rink! 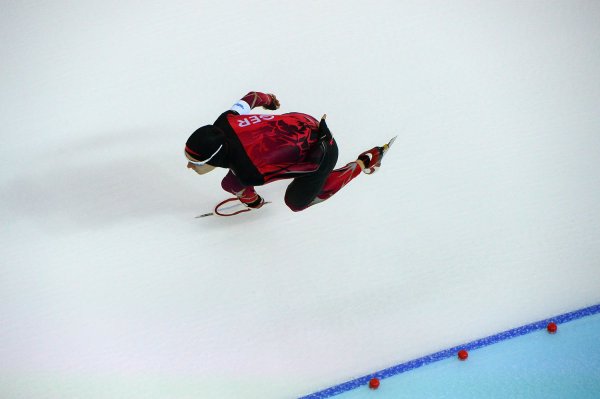 Sochi Olympics: Photos from Day 3
Next Up: Editor's Pick