The U.S. Has Had a Military Presence in Greenland Since 1941. A Young New Leader Wants Much More

Mute Egede, pictured ahead of the parliamentary elections in April, in which his Inuit Ataqatigiit party secured a win and lifted him to Prime Minister.
Emil Helms—Ritzau Scanpix/Reuters
By Vivienne Walt

Back in August 2019, former President Donald Trump floated what seemed like a wildly eccentric idea: Have the U.S. buy Greenland, the world’s biggest island, where a population of just 56,000 people live atop huge mineral reserves. “Essentially, it’s a large real-estate deal,” Trump told reporters at the time. The Prime Minister of Denmark—of which Greenland is an autonomous territory—dismissed Trump’s idea as “absurd,” prompting the former president to cancel his planned visit to the country.

Nearly two years later, another administration is seeking to build ties with the Arctic Circle island, which holds increasing strategic importance for the U.S., Russia and China. U.S. Secretary of State Antony Blinken is due to touch down in Greenland on Thursday, at a time when the island’s politics are in deep churn, after a new left-wing-led coalition government ousted the long-time ruling social democratic Siumut party. The new government is now eager to ink economic deals with Washington, and ramp up moves towards independence. Greenland has self-rule under Denmark, with its own parliament, but all most of its seven political parties favor breaking free of Denmark sooner or later. This is all happening under the shadow of large-scale environmental upheaval—and economic opportunities—from the fast-warming Arctic.

The U.S. has no intention of trying to buy Greenland this time around. The idea was put forward not just by Trump, but also President Harry Truman, who offered $100 million in gold for the island in 1946. In an interview with TIME, Greenland’s new Prime Minister Mute Egede says Trump’s offer made him realize just how valuable his homeland was. “It just shows how important Greenland could be in the future of the world,” he says. “We are in the middle of the Arctic, the middle of North America, Europe and eastern countries.”

The State Department says Blinken, arriving in Greenland at the tail end of a tour of the region, will “discuss the strong partnership between the United States and Greenland and our shared commitment to increase cooperation in the Arctic.” But the partnership could prove as lucrative to the U.S. as the real-estate deal Trump envisioned in 2019. In interviews over the past week, Egede and his Foreign Minister Pele Broberg said they intend to push the U.S. to begin investing heavily in its industries, such as mining, fishing and tourism, rather than simply regarding the territory as a strategic military site, from which to surveil Russia and China from a relatively close, but safe, distance.

For the U.S. that would be a major shift. It has had a military base in Greenland since 1941, which it built in secret during the Nazi occupation of Denmark. Today the Thule U.S. Air Force base monitors space and operates a network of early-warning sensors from the site.

For Egede—who, at 34, is among the world’s youngest political leaders—it is a key moment. He says he hopes that, as China, Russia and the European Union scramble for Greenland’s natural resources, the U.S. might be spurred to invest more. His message to the U.S., he says, will be that while Greenland is happy to host its military, it expects some benefits in return. “The Greenlandic people want more growth than just that military base,” Egede said over a Skype call from Greenland’s tiny capital city, Nuuk. “The U.S. wants to use the air base. We also need to have something for it.”

Egede predicts that there will be increasingly fierce competition over Greenland’s economy among global heavyweights, as the melting polar cap opens up more shipping routes to Russia, the U.S. and Asia—which would benefit China—and makes it less complicated and costly to mine and export minerals. “Development could be very fast in the coming years,” he says. “We need to be really, really ready for that.”

At stake are huge deposits of rare-earth minerals in Greenland—among the world’s biggest untapped reserves of the metals, which are essential to making the high-tech batteries and magnets found in smartphones, electric cars, wind turbines and countless other items. China currently mines about 70% of the world’s rare-earth minerals and produces around 90% of the magnets which are the final products they are used for, according to data research company Adamas Intelligence. As countries race to meet their climate commitments under the Paris Agreement, many could face a squeeze on supplies. “End-users outside of China will remain reliant on and vulnerable to China’s monopoly into the foreseeable future,” Adamas said in a 2019 report.

Despite that, Arctic experts believe that the U.S. has been overly focused on reining in China’s influence in Greenland, while neglecting to invest economically in the region. In 2018, U.S. defense officials blocked Chinese state-owned banks from building a commercial airport in Nuuk, and helped negotiate alternative financing from Denmark. “If you tune into the media, you would think Greenland is all about the U.S. and China,” says Dwayne Menezes, director of the Polar Research and Policy Initiative, a London-based think tank that consults with governments and companies about investing. “But the truth is that of the 41 companies that hold licenses in Greenland, 26 of them are British, Canadian or Australian. The U.S., despite all the talk about economic interests, has not a single company operating in Greenland.”

Egede’s left-wing environmentalist party, Inuit Ataqatigiit, ousted the Siumut party after a snap election last month with a campaign promise to block a huge mining project, believed to have potential for about 10% of the world’s rare-earth mineral supplies. The new government canceled the deal with Australian and Chinese mining companies amid concerns that uranium from the mine could leach into Greenland’s farmland. “We do not want uranium mining,” Egede said. “If people come to Greenland and begin to operate, and we do not have legislation that is clear, it will be really dangerous.”

The push for an independent Greenland

Establishing Greenlandic independence is yet another political discussion. But for Greenland to become an independent country, it would need to replace the roughly $620 million a year it receives from Denmark to run its administration. Its mineral riches, as well as large fish stocks, should help make up that shortfall. And even its melting ice could be a money-spinner. The Polar Research and Policy Initiative’s Menezes, for example, is exploring the possibility of marketing giant icebergs that have broken off, by loading them onto tankers and shipping them to countries looking to buy high-quality supplies of water. “It helps contribute to the consequences of climate change,” he says.

Business deals like these could accelerate Greenland’s quest for nationhood. So far, Egede’s government has not specified when that could be. Danish politicians have said over the years that they expect the island to eventually become independent, but like Greenland’s leaders, they haven’t set out a timeline. “We will take it up,” Greenland’s new Foreign Minister Broberg told TIME. “Whether it is in four, eight, or 12 years, that is difficult to say.”

There would be huge logistical challenges to unraveling the centuries-old political and cultural relationship with Denmark. Raised within the Kingdom of Denmark, young Greenlanders attend schools that teach in Danish and Greenlandic, a language not even offered on Google Translate, and which no one beyond the island’s tiny population speaks.

Establishing closer ties with the U.S. would have its advantages, though. Nuuk is closer to New York than Copenhagen. A one-way flight to Denmark’s capital—the only commercial route remaining in operation during the pandemic—costs about $2,500, says Broberg, who is a former pilot. “Goods are approximately one-third the price in the U.S. than the goods we buy from Denmark,” he says. “Whether it is Netflix, or building materials, or supermarket food, we want to buy from the U.S.,” he says. “That is not a bad thing.”

Broberg says that if—or when—independence finally comes, Greenland is likely to have strong connections with the U.S. beyond trade. Greenland’s extensive high-speed fiber-optic network has brought with it better access to streaming services, allowing younger islanders to binge-watch American TV series and movies, Broberg says. He was recently stunned to discover that his 14-year-old daughter could speak English. “She had an online friend in Canada who she was gaming with,” he says. “So she learned English on YouTube.” 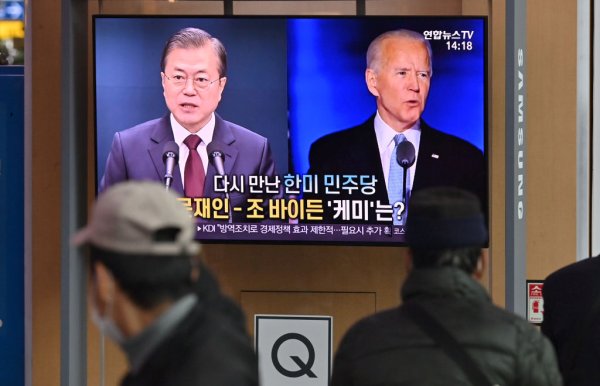 What to Know About Joe Biden's Summit With Moon Jae-in
Next Up: Editor's Pick