I Fled Gaza But My Family Remains. Will the U.S. Step Up and Help Them?

Ideas
By Jehad al-Saftawi
Jehad al-Saftawi is the author of My Gaza: A City in Photographs and is founder of RefugeEye, a nonprofit organization which supports refugee journalists.

I’ve lived in California since I escaped Gaza in 2016. I’m at my desk, trying to write about the events of the past week and can’t concentrate. After a long night of watching bombs fall and destruction reign in my home, I woke up on Saturday and called my mother who lives north of Gaza City. “How are you?” I ask.

As soon as my mother finishes her response, “We are still fine,” I hear the sound of an Israeli air-raid. I see the force of the blast shake the phone as she holds it in her hand, and the curtain of the window behind her.

In seconds, we hear a burst of homemade rockets, loud enough that we know they were fired from very near where my family lives. I remind her to open all the windows of the house, to prevent them from exploding in a subsequent blast. “We did it already,” Mum replies.

Rockets launched toward Israel from the northern Gaza Strip, and the response from the Israeli missile-defense system known as the Iron Dome, leave streaks through the sky in Gaza City on May 14.
Fatima Shbair—Getty Images

I was lucky enough to find my way to New York City five years ago, after working from Gaza for a U.S.-based nonprofit organization for several years. I was lucky to have friends who looked out for my wife and me while we were trying to apply for asylum.

Nothing in the years since I left Gaza has occurred to keep this part of the world safe. Four elections have passed without any party forming a government. Growing Israeli voter support has empowered right-wing parties to pursue more settlement projects in the West Bank. The peace process with Palestinians is not even an afterthought.

The barrage of Hamas rockets pouring on Israeli cities and towns accomplished one thing Prime Minister Benjamin Netanyahu could not before this week: it allowed him to reach common ground with his traditional ultra-Orthodox and extremist-nationalist allies. On Wednesday one of the latter, former Israeli defense minister Naftali Bennett, called on Netanyahu to reject international offers to mediate a ceasefire and to take stronger measures against Hamas. “Don’t stop until Hamas pays a heavy price,” he said.

My Palestinian family has been paying this price my whole life.

Women await the arrival of the bodies of their relatives, who were killed during an Israeli airstrike in Gaza City on May 16.
Fatima Shbair—Getty Images

Back at my writing desk, my wife Lara interrupts to tell me there is news of tanks entering, and possibly a ground operation in progress (it later turns out to be false)

I call again, to check in on my family. This time they seem very different from the last call. My youngest sister Leen picks up my mother’s phone because she is unable to speak. Leen tells me that the last thirty minutes were the most difficult moments of their lives. Dozens of airstrikes hit the streets around their home, smashing buildings, destroying roads, sending black smoke into the sky.

My family remained in the house, hiding in the middle of a hallway. They huddled together for half an hour, seeing nothing more than red flashes which would periodically engulf them. Massive explosions went on and on. This was the largest and most violent series of raids since the start of this round of military confrontations between Hamas and the Israeli army. My sister tells me they feel death approaching now more than ever before.

Palestinian women look out from a window at the rubble of a destroyed house in Gaza City on May 16.
Fatima Shbair—Getty Images

Netanyahu’s bravado has threatened all aspects of Palestinian life, since his great ally Donald Trump became U.S. President. Our religious sites, our identity, everything dear to us is in peril. In recent years, Netanyahu expanded settlements, threatened to annex large parts of the West Bank, and moved the U.S. embassy to Jerusalem. Some Palestinians even feel he provoked the escalating tensions in Jerusalem. Now, the Israeli military is beginning to engage in mixed Arab-Israeli cities. Nothing is more dangerous and or more likely to stoke sectarian violence.

Palestinians like my family have little recourse. The Palestinian Authority, led by Palestinian President Mahmoud Abbas from the West Bank, has been unable to provide an alternative method to advance the peace process. From its base in Gaza, Hamas has made a deeply complicated, anguished process only more so. Their extremism only begets more extremism. Our people are disintegrating because of their radical ideas.

Without a political solution through international law, Islamists will always find fertile ground for promoting their extremist ideology which so easily leads to violence against people like my family members. Hamas rockets are only increasing the likelihood of a unified right-wing government, all at the expense of innocent Palestinians.

Who can break this cycle? It could not be a more critical moment for the administration of President Joe Biden to take a stand for justice, to help reverse the course of the last several years. What’s happening now is what’s happened again and again. Without a political strategy that permits families like mine to imagine a future free of conflict, it will happen again. There will be no peace. But I believe there is a path to peace, however narrow. My years in the U.S. have given me hope that even during intense conflict, it’s possible to see what’s good in one another. I have faith in the idea that the mistakes of our past can be examined and that real social change is possible.

On Saturday morning I woke up in California to see images of the bombing of the al-Jalaa tower. A fourteen-story mixed-use building in the center of Gaza City, it was home to several journalists’ offices and it was also my home during my last years before seeking refuge in the United States. Nothing is left of it. 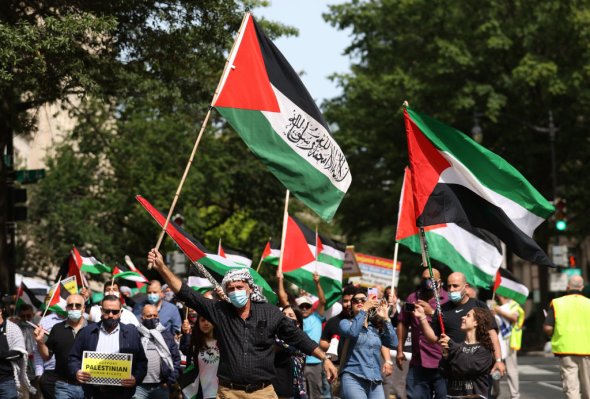 A Major Rights Group Says Israel Is Guilty of Apartheid. It Might Fracture the Status Quo in Washington
Next Up: Editor's Pick