What Happens Next With the Protests Roiling Colombia

Demonstrators gather on a street in Bogota on May 12. Demonstrations that began two weeks ago as anger over pandemic-related tax reforms have intensified and spread, turning into a collective howl of outrage over abuses by the national police force.
Federico Rios—The New York Times/Redux
Ideas
By Ian Bremmer
Bremmer is a foreign affairs columnist and editor-at-large at TIME. He is the president of Eurasia Group, a political-risk consultancy, and GZERO Media, a company dedicated to providing intelligent and engaging coverage of international affairs. He teaches applied geopolitics at Columbia University’s School of International and Public Affairs and his most recent book is Us vs. Them: The Failure of Globalism.

It’s an old story. The government does something unpopular, angry people turn out in protest, police respond with a heavy hand, fueling more anger and intensifying the unrest. At first, protesters are motivated by a specific demand, but as violence builds, the grievance list lengthens, and demonstrations take on a life of their own. The latest chapter: Colombia.

Colombia’s people are hurting, and government is short of cash to do much about it. The pandemic has pushed state finances into dangerous territory. The country’s fiscal deficit more than tripled from 2019 to 2020, stoking fears that as it becomes more expensive for Colombia to borrow, the country could enter a debt spiral that compromises government and corporate credit ratings, weighs even more heavily on economic growth, and deprives the state of the money it needs to spend on better health care, education, infrastructure, and plans to reduce poverty.

That’s why President Ivan Duque proposed a tax reform plan. But the plan turned out to be intensely unpopular because it expands the number of people, including lower- and middle-income workers, who pay income taxes, eliminates some tax benefits, adds sales taxes on many basic staples, ends exemptions from value-added tax, and creates a wealth tax.

Making matters worse, the tax hikes came at a time when Colombians were already suffering. Thanks mainly to COVID-19, the national poverty rate jumped from 37.5 percent in 2019 to about 50 percent in 2020. GDP dropped by 6.8 percent. Unemployment is stuck above 15 percent. The country also faces a third wave of the virus: COVID cases rose almost five-fold across Colombia from March 1 to April 19.

Unions and other opponents of Duque’s plan called for a general strike, which began on April 28, to force the government to withdraw the plan. Police responded with brutal violence. Rights group Amnesty International accuses Colombian authorities of “excessive and unnecessary use of force against demonstrators, which has resulted in dozens of people being killed and injured, arbitrary detentions, acts of torture and sexual violence.” It cites “reports of people disappearing” and calls on the Colombian government to “respect freedom of expression and the press and ensure that journalists can cover the news in safety.”

The president has since withdrawn the plan, and his finance minister, who embarrassed the government in April when his wildly inaccurate guess at the price of eggs during a media interview created a furor, has resigned. But the actions of police and years of frustration over wealth inequality and official corruption have only intensified the fury in the streets. In fact, the latest unrest is a sign of deeper frustration with Duque’s government. In 2019, demonstrations erupted in Bogota over widening wealthy inequality, rising urban crime rates, and poor healthcare and education systems, sending hundreds of thousands of people into the streets. Dozens have now been killed in three weeks of unrest.

The protests, originally called by trade unions, have added other groups with other grievances. Indigenous Afro-Colombian groups from rural areas have joined the demonstrations to vent their anger that government isn’t doing enough to protect them from rebel groups and former rebels who have turned to organized crime and have killed scores of community leaders and civilians. Middle class citizens have joined to protest higher taxes and police brutality.

As participation in the demonstrations has broadened, so have the demands. Duque’s government now faces calls for universal basic income, free university tuition, and the dismantling of the riot police force. Protesters in some Colombian cities, particularly in Cali, have blockaded roads and streets, creating shortages of food and fuel. Duque has met with members of the National Strike Committee, which has organized some of the protests, but the Colombian government can’t afford to meet most of their demands, and it isn’t clear that the Strike Committee speaks for a big enough portion of the crowd to make the kind of deal that would bring the unrest to an end.

There are also two forms of contagion risk in this story. The first centers on the pandemic. The current COVID wave is now cresting, and the risk that protests will become super-spreader events is rising in a country already short on hospital beds, ICU supplies, and vaccine doses

The second risk is that violence will spread across the region. People across Latin America are watching the protests in Colombia. In 2019, public anger rattled governments in countries as different from one another as Chile, Bolivia, Ecuador and Haiti. The coronavirus has exacerbated the economic stagnation that drove much of that anger and done nothing to help address problems of government corruption. Governments across Latin America are short of cash, people are short of patience, and COVID will make both problems worse.

All protests everywhere are intended to draw attention to grievances and demands for action. With that in mind, check out these tightrope walkers high above the demonstrations in Medellin and Bogota’s Philharmonic Orchestra striking up Fanfare for the Common Man to appeal for calm. And click here to see the (sometimes elaborate) costumes worn by the mainly peaceful protesters and to read first-person accounts of the broad range of grievances that keep these protesters on the streets. 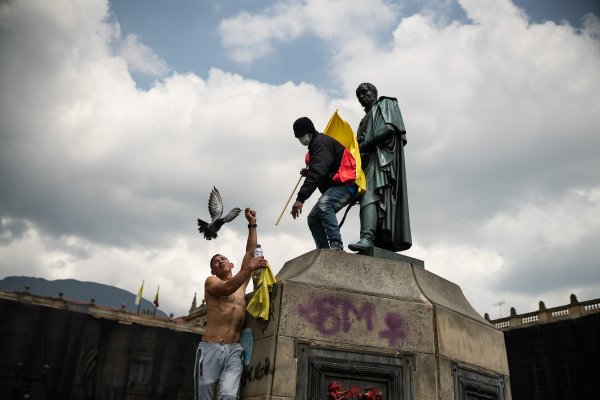