Post-Traumatic Stress Disorder (PTSD), will affect some 26 million Americans at some point in their lives, according to the Department of Veterans Affairs. The condition, characterized by depression, hopelessness, memory problems, difficulty maintaining relationships, and recurrent visions of the trauma-causing event is notoriously hard to treat. Up to a third of people with the condition are still symptomatic 10 years after diagnosis, and the main therapeutic drugs of choice—the selective serotonin reuptake inhibitors sertraline and paroxetine—fail in up to 60% of patients. A study published yesterday, however, suggests that there may be a powerful new medication to battle the condition: MDMA, the primary chemical in the drugs colloquially known as ecstasy and molly.

In a Phase 3 trial led by neurologist Jennifer Mitchell of the University of California, San Francisco, treatment with three doses of MDMA—accompanied by one-on-one therapy—over the course of 18 weeks was significantly more effective in treating symptoms of PTSD than the same talk therapy accompanied by a placebo. In some cases, the people who received the MDMA no longer even met the diagnosis for PTSD at the end of the study period.

The sample group of subjects who participated in the study was relatively small—just 90 people—but they had suffered long, on average going 14.8 years since the onset of symptoms. The group included veterans who’d experienced combat trauma, victims of sexual assault and/or domestic violence, people who had been through mass shootings, and some who had suffered childhood trauma.

Before the study began, all of them were scored on three scales. The first, the Clinician Administered PTSD Scale for DSM-5 (CAPS-5), is a 30-item survey asking subjects to rate such symptoms as unwanted memories of the traumatic event on a zero to four scale, with four being the most severe. The second, the Sheehan Disability Scale (SDS), is a similar self-rating survey, asking subjects to evaluate on a zero to 10 scale how much their PTSD interferes with their professional, home and social lives. The third, the Beck Depression Inventory, is a 21-question survey that asks subjects to rate feelings like sadness, hopelessness, self-criticism and self-loathing on a zero to three scale. In all of the surveys, MDMA appeared to be dramatically better at improving outcomes—when combined with talk therapy—compared to the placebo.

At the end of the 18 weeks, the researchers found, the average CAPS-5 score fell 24.4 points in the MDMA group compared to the 13.9-point drop among those who received the placebo. The SDS scores fell 3.1 points in the MDMA group against 2.0 for the placebo. For the Beck Inventory, the difference was a reduction of 19.7 points compared to 10.8. More dramatically, at the conclusion of the study period, 67% of the people who had taken MDMA no longer met the criteria for a PTSD diagnosis, compared to 32% of the placebo group. All of this, Mitchell believes, means that MDMA could become the treatment of choice for PTSD going forward.

“I speculate that the demand will be unprecedented,” she said in an email to TIME. “There are so many people suffering from PTSD and the current treatment options leave much to be desired.”

It’s unclear how MDMA works, but the paper suggests that the chemical might increase the availability of the neurotransmitter serotonin in the brain; the researchers also cite animal studies showing that MDMA may decrease the reactivity of the amygdala, the brain center where primal feelings like fear, anger and anxiety are processed.

The investigators concede that the course of the study was brief, and more follow-up is needed to determine how long the positive impacts of the MDMA treatment last. In addition, the study’s findings by no means indicate that traditional intervention can’t be effective; indeed, on average, all the subjects benefited from their 18 weeks under care. But the MDMA group clearly did better. The researchers write that this could be chalked up to the ability of the drug to make people more prosocial (or better able to connect with others), which could in turn enhance the relationship with a clinician, making talk therapy more effective.

The findings were powerful enough that Mitchell believes they not only could mean that MDMA will become a frontline treatment for PTSD, but that similar drugs could emerge with their own therapeutic value. “My hope is that this will open the door to testing other psychedelic compounds for other conditions—such as LSD for alcohol use disorder and psilocybin for OCD [obsessive-compulsive disorder] and end-of-life distress,” she says. 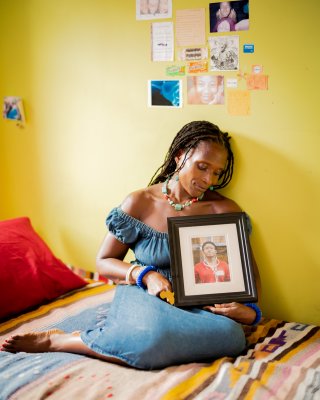 Suicide Among Black Girls Is a Hidden Crisis
Next Up: Editor's Pick