9 Countries That Hate America Most

Mar. 31, 2014. A giant American flag is unfurled on the field during ceremonies before the start of the game between the Washington Nationals and the New York Mets at Citi Field in Flushing Meadows, New York.
Justin Lane—EPA
By Thomas C. Frohlich , Vince Calio and Alexander E.M. Hess

International approval of U.S. leadership improved last year, rising from of 41% in 2012 to 46% in 2013. This ended a downward trend in U.S. approval ratings, which had consistently declined since 2009.

While people around the world tended to have positive opinions of U.S. leadership, residents of some countries had a negative impression of the United States. In five nations, more than two-thirds of those surveyed disapproved of the current administration, according to the latest U.S.-Global Leadership Project, a partnership between Meridian International Center and Gallup.

Last year represented a major improvement for U.S. leadership, Ambassador Stuart Holliday, president and CEO of Meridian International Center, told 24/7 Wall St. There were several reasons for this, including a wind-down of America’s role in armed conflicts abroad. As a result, “The view that we are the major shapers of the world and our image as being the world’s policeman are fading,” Holliday said. An ongoing return to normalcy in the global economy, in which the United States plays an outsized role, has also helped, he added.

The United States has long-running political tensions with many nations that disapprove of the U.S. leadership. Among these is Iran, which has not had diplomatic relations with the U.S. since 1980, and whose nuclear ambitions and human rights violations are points of contention for the United States. In Pakistan, the U.S. has launched attacks against terrorists and insurgents inside the country. Most notable was the 2011 raid and killing of Osama bin Laden, which led to heightened tensions between the two nations.

More: How Much Trouble is GM Really In?

Another potential reason for high disapproval of U.S. leadership is the relationship with Israel. The U.S. State Department notes America was the first country to recognize Israel in 1948, and that “Israel has become, and remains, America’s most reliable partner in the Middle East.” Countries with long-running disputes with Israel — such as Lebanon and the Palestinian territories — also disapprove of U.S. leadership.

Ambassador Holliday noted the situation in the Middle East is also influenced by a lack of clarity over U.S. policy goals and, to some extent, perceptions of the U.S. government’s support of Israel. This is driven in large part by a 24/7 news cycle that chronicles every twist and turn of the peace process, Holliday added.

Several of the countries that dislike American leadership the most have also undergone recent political upheavals. Mass demonstrations in Tunisia, for example, set the tone in 2011 for what came to be known as the Arab Spring. There has also been considerable political upheaval in Egypt following the forced resignation and trial of President Hosni Mubarak in 2011. Mubarak was long considered a stable ally of the United States.

However, while it may be easy to conclude disapproval of U.S. leadership is largely limited to the Middle East and North Africa, this is not always the case. Most notably, in Slovenia, 57% of residents disapproved of U.S. leadership — despite the fact that the country is both a major ally in NATO and a member of the European Union.

But what Slovenia has in common with a number of other countries that disapprove of American leadership is the citizens’ negative opinion of their country’s government. In 2012, less than one-quarter of Slovenians had confidence in their own government, and a similar number lacked faith in their judicial system, lower than in the vast majority of the countries in the same region. Similarly, less than one-third of Pakistan and Iraq residents had confidence in their governments.

More: Is Coke Worth More Than Pepsi?

America’s strong economy may also provoke resentment among residents of these countries. According to Jon Clifton, Managing Director of the Gallup World Poll, residents of many of these countries experience hardship and do not enjoy the kind of broad economic benefits seen in more developed countries. As a result, residents equate “U.S. leadership and the leadership of whatever the current economic order represents for them.”

GDP per capita in four of the nine countries that hate America the most was less than $10,000 last year. By contrast, U.S. gross domestic product totaled more than $50,000 per capita in 2013.

Limited access to basic needs may also add to the misery of the citizens in many countries that disapprove of the United States the most. Just 31% of Iraqis were satisfied with the quality of their drinking water in 2012, less than any of the 16 other peer countries in the Middle East and North Africa. In Slovenia, only 24% of residents said they were satisfied with the availability of good, affordable housing. This was less than in all but one other OECD nation.

To determine the countries that hate America most, 24/7 Wall St. relied on data from The U.S.-Global Leadership Project, a partnership between Gallup and the Meridian International Center. Gallup also provided data from a number of other indices it produced through polling in 2012. Additional economic information and estimates, including unemployment data, came from the International Monetary Fund’s (IMF) 2013 World Economic Outlook. IMF figures on GDP per capita are given at purchasing-power-parity in order to show real differences in wealth. Data on life expectancy was provided by The World Bank.

These are the countries that hate America most.

The United States and Iraq have a long history of conflict. The Gulf War in 1991 was followed by the Iraq War, which began in 2003 and lasted until U.S. forces left Iraq in December 2011. Although the war has ended, the U.S. State Department warned that traveling to the country is extremely dangerous because of civil unrest and threat of kidnappings and terrorist attacks. The long-running presence of the U.S. military and the years of conflict, during which hundreds of thousands of Iraqis, including civilians, died have likely contributed to negative opinions of Americans. The new government has struggled since the war began. Many citizens disapprove of the regime of Prime Minister Nouri al-Maliki, who was elected to office in 2010 under a free election overseen by the United States. As of 2012, however, Iraqis were less likely to express confidence in their national government, military or judicial system than citizens of peer nations, and just 30% believed their country had fair elections — lower than in any country in the region.

More than 100 Yemeni citizens have been detained at Guantanamo Bay over the years. The United States also has been concerned over terrorist activity in Yemen. It is therefore no surprise that the two countries have a strained relationship and that nearly 70% of survey respondents disapproved of U.S. leadership. Also, just 9% of Yemenite respondents approved of U.S. leadership, less than in any other country reviewed by Gallup. The country suffers from a very poor economy, with GDP per capita at just $2,348 last year, among the very lowest in the world. According to the World Bank, more than half of the country’s population lived in poverty as of 2012. U.S. citizens are currently under advisory from the U.S. State Department to avoid traveling to Yemen due to the extremely high security threat level.

Like many countries that disapprove of U.S. leadership, Lebanon has a long history of conflict with Israel. Hezbollah, a militant group and political party deemed a terrorist organization by the United States and European Union, has operated out of Lebanon for several decades. In February, Israeli forces bombed a Hezbollah convoy on the Syrian-Lebanese border. Hezbollah subsequently claimed responsibility for the roadside bombing of an Israeli patrol along the Lebanese-Israeli border in retaliation. The country is also strapped with debt. Its gross debt was nearly 143% of its GDP last year, the third highest in the world. According to a recent AP report, the country’s debt problem is compounded by corruption and a government unwilling to act. In 2012, 85% of residents stated that corruption was widespread, the most of any comparable country.

While 73% of Pakistani respondents still disapproved of U.S. leadership in 2013, this was a six percentage points improvement over 2012. Relations with Pakistan have been tense since the September 11, 2001, terrorist attacks on the United States by al-Qaeda. Shortly after the attacks, the U.S. made Pakistan the base of its operations in its hunt for al-Qaeda leader Osama bin Laden and the war on Afghanistan’s then-leadership, the Taliban. In 2009, a survey revealed that 59% of the Pakistani people viewed the United States as a bully and as a bigger threat than al-Qaeda. Further exacerbating the country’s negative view of the U.S. may be Pakistan’s struggling economy and poor governance. Just one in 10 Pakistanis said they lived comfortably on their incomes in 2012, according to Gallup, and only 23% of Pakistanis expressed confidence in their government.

Four of five Palestinians disapproved of American leadership, by far the worst perception of the United States globally. One explanation for the country’s hostility toward the United States is Palestine’s conflict with Israel. Hamas, the organization that has effectively governed the Gaza Strip territory since 2007, is considered by the United States and European Union to be a terrorist organization. Possibly emphasizing the deep divides in the Palestinian territories, just 18% of respondents told Gallup the place they lived was a good place for racial and ethnic minorities in 2012, less than all but one other country in the region. 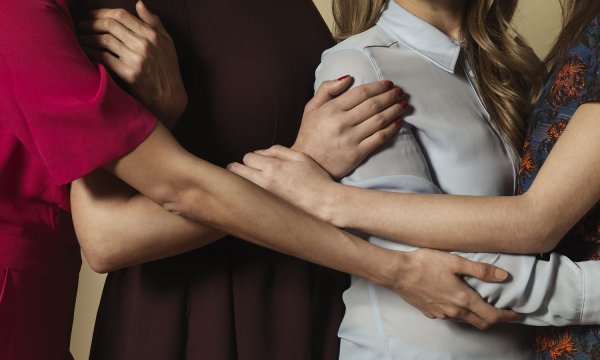 10 Quick Ways to Lose All Your Friends
Next Up: Editor's Pick