For Trump, a Little Contrition Could Have Gotten Him Back on Facebook

Americans love to give second chances. A come-back story is basically part of the national DNA. From elementary school, kids are taught that Founding Father George Washington took an axe to his father’s favorite cherry tree, only to be given another shot to be a good boy and shape the nation after he apologized.

Redemption has been part of our political religion ever since. Richard Nixon and Ronald Reagan both made successful comebacks as presidential candidates. Even obvious albatrosses like John McCain’s S&L scandal, Bill Clinton’s affair with an intern, and Joe Biden’s accidental plagiarism allowed second acts with the appropriate amount of contrition. When confronted with a choice, Americans choose another chance — provided it’s partnered with penance.

Needless to say, former President Donald Trump didn’t get that memo. Admitting an error or expressing remorse does not come naturally, if at all, to 45. And, for that, he will pay a price.

Earlier this morning, Facebook’s so-called supreme court decided to uphold its suspension of the former President from its platform, which Trump used to spread the lie that he had actually won the 2020 election, that all manner of sketchiness was afoot and to help organize and live-stream the rally that led to a deadly insurrection against Congress. Facebook’s independent Oversight Board decided that the former President was still too big of a risk to have on its steps and too irresponsible to be allowed to use the site.

But it also told the company to revisit the matter in six months once it had taken a beat to consider how, exactly, it would move forward balancing the newsworthy nature of people like Trump unleashing outright lies in some cases, and what amounts to hate speech in others. A permanent ban, officials said, was probably not workable for someone like Trump — or other heads of state around the globe. The U.S. market, after all, comprises only about 10% of Facebook’s total audience.

Here in Washington, the ruling is certain to renew the ongoing discussion about just how much power and responsibility social media giants like Facebook should have in the nation’s politics. Acting as both the head of the U.S. government and a private citizen, Trump used Facebook to tap into troves of data that users voluntarily made available to its algorithms and Twitter to amplify a message that, had mainstream journalists used their own judgements, would have fallen into irrelevance for its absurdity. Recall, the whole “birther” movement found its footing on Twitter and its legs on Fox News.

Conservatives immediately renewed their off-base claims that tech companies discriminate against conservatives in the wake of the ruling — despite even folks like the libertarian think-tank Cato Institute arguing otherwise. The Republican National Committee called Facebook’s decision “a complete disregard for the First Amendment” and — in all caps — ”CENSORING” Trump. In relying on international law over the United States’ own First Amendment free-speech rights, Facebook unleashed a string of the very same globalist grievances that helped fuel Trump’s rise to power. And anti-monopoly sentiment from across the spectrum again questioned if one company like Facebook should have so much control over the digital space.

Ultimately, though, it comes down to one man and his masterful manipulation of Americans’ social-media habits. Now out of office and without access to either Facebook or Twitter, Trump has resorted to sending his missives by email to a press list and reposting them on what amounts to a blog on his post-White House website. The shrinking prestige has limited his reach more than most ex-Presidents and given his successor, Joe Biden, a little bit of breathing room. It may also spare Trumps’ fellow Republicans a measure of his meddling in the party’s ongoing brawl over House leadership at the moment when insufficient loyalty to Trump’s lies is seen as grounds for an ouster.

Trump, of course, took the news poorly and lashed out in a statement. He continued to demonstrate defiance against the order and trash the company as disgrace. It’s not impossible to imagine an entirely different outcome had Trump promised after Jan. 6 to be more careful, offered an apology and at least pretended like he’s learned the lesson. Trump is a lucrative shadow over social media spaces and a generous client, and ultimately, Facebook is a business. Businesses are either growing or dying, and dimming Trump’s massive spotlight in the name of civility will come at a measurable cost. As much as Trump appeared on the ballot as a resident of New York in 2016 and of Florida in 2020, he was actually a native of social media.

Facebook shut down Trump immediately after the Jan. 6 insurrection at the Capitol based on the lie that the election had been stolen from him. But Facebook booted it to the largely independent review panel for a second look. The panel appeared to want to give Trump a break, even saying the company needed to take another pass on the batter and setting the timer to six months. “Mr. Trump would not be reinstated until and unless he ceases to pose a serious risk,” one oversight official tweeted. In other words, if Trump is penitent, Facebook could still give him back his passwords. It’s hard to imagine a 2024 presidential run without using mainstream social-media platforms as a tool. It’s even harder to imagine Trump backing down. 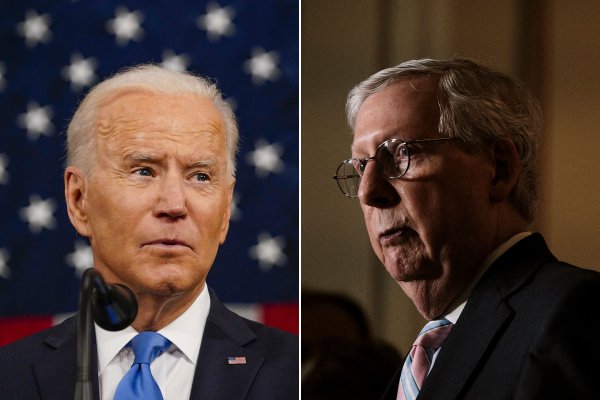 Clash Coming: Joe Biden and Mitch McConnell Are Preparing for a Spending Standoff
Next Up: Editor's Pick