Government media and rebel forces in Syria blamed one another on Saturday for what they called a poison gas attack in a central village the day before that reportedly injured scores of people.

Dozens of people in the village of Kfar Zeita in the province of Hama were reported hurt, according to the Syrian National Coalition, the main Western-backed opposition group. The Britain-based Syrian Observatory for Human Rights, which documents abuses in the conflict and favors the opposition, also reported that people suffered breathing problems and suffocation after air raid attacks that left heavy smoke in the air.

State-run Syrian television blamed an al-Qaeda-affiliated group for using chlorine gas in the village, which it claimed left more than 100 injured and two people dead, the Associated Press reports. An attack could not be immediately and independently confirmed.

In a video posted online by opposition activists and corroborated by the AP, men and children are seen packed into a hospital room in Kfar Zeita, many of them breathing through oxygen masks. Six children in the video are seen crowded on one bed, seemingly having difficulty breathing.

A chemical attack last August that killed hundreds of people was largely blamed on the Syrian government, but President Bashar Assad claimed rebels staged the killings. 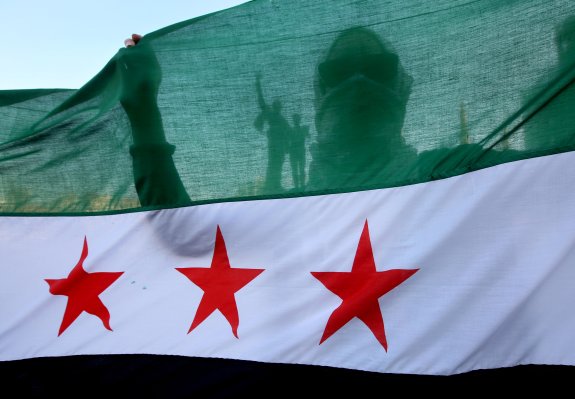 Syrian Rebels May Own U.S.-Made Arms
Next Up: Editor's Pick