In 1579, an African man now known by the name of Yasuke arrived in Japan. Much about him remains a mystery: it’s unconfirmed which country in Africa he hailed from, and there is no verifiable record of his life after 1582. But Yasuke was a real-life Black samurai who served under Oda Nobunaga, one of the most important feudal lords in Japanese history and a unifier of the country. He is also the inspiration for Netflix’s new anime series Yasuke—a project from creator and director LeSean Thomas and the Japanese animation studio MAPPA, executive produced by LaKeith Stanfield, who voices Yasuke, and Flying Lotus, who produced the soundtrack.

This is not the first time that Yasuke has appeared in popular culture. Author Kurusu Yoshio published the children’s book Kuro-suke about the samurai in 1968. Yasuke also showed up as a playable character in the 2017 video game Nioh. And in 2019, before Chadwick Boseman’s death, it was announced that the actor would play Yasuke in a film based on the warrior’s story.

The Netflix anime series takes a new approach in telling Yasuke’s story—one that combines historical elements with fantastical components. “Animation is always the medium where you can do things that real people can’t do,” Thomas told TIME. In the show, there are plenty of giant robots, magical beasts and otherworldly fight sequences involving supernatural powers. But there are also scenes inspired by events recorded about the African samurai’s life.

One of the first scenes in the anime shows the first meeting between Nobunaga and Yasuke. After the feudal lord applauds him for winning a fight on the streets, he asks for Yasuke to be cleaned, thinking that his skin is covered in dirt. “Did you ink your skin black?” Nobunaga inquires when Yasuke’s appearance does not change. “I was born with black skin,” Yasuke responds. This interaction is not too unlike the actual initial encounter between the men. “Yasuke was brought before Nobunaga and he didn’t believe Yasuke’s true skin color was black,” said Thomas Lockley, a co-author of African Samurai: The True Story of Yasuke, a Legendary Black Warrior in Feudal Japan along with Geoffrey Girard. Lockley described this event from March of 1581. “[Nobunaga] ordered him scrubbed. Of course Yasuke’s skin remains intact,” he said. Nobunaga then threw a party to welcome the man into his court. According to Lockley, Yasuke entered the feudal lord’s service sometime within the next few days.

The anime series references a range of other moments documented in the life of the Black samurai who lived more than 400 years ago. Interest in Yasuke is bound to grow since, as Lockley says, he is widely regarded as the first-ever foreigner to be given warrior status in Japan. Here is the true story of Yasuke.

When Yasuke arrived in Japan in 1579, he was with an Italian Jesuit named Alessandro Valignano. They came by way of India, and according to Lockley, Yasuke was in service to Valignano most likely as a bodyguard. “As a priest he wasn’t allowed to have any soldiers or guards,” Lockley said of the Jesuit missionary. “Euphemistically, they had valets—manservants if you’d like—who were also versed in weapons.” In 1581, Valignano headed to what was then the capital city, Kyoto, to meet with Nobunaga and request permission to leave Japan. It was on this trip that Yasuke crossed paths with the feudal lord.

Some have said that Yasuke was a slave, and Lockley acknowledges the theory but disagrees. “Personally I don’t think he was a slave in any sense of the word, I think he was a free actor,” Lockley said. The author speculates that given the circumstances of how the African man arrived at his employment with Valignano, it’s possible that Yasuke was enslaved as a child and taken from Africa to India. There, Lockley said the man could have been a military slave or an indentured soldier, but he “probably got his freedom before meeting Valignano.”

Standing at more than six feet tall and described as having the strength of 10 men, Yasuke left a strong impression on Nobunaga. “It seems like he was a confidant, Nobunaga is recorded as talking often with him,” Lockley said in a follow-up email. “He was also a weapon bearer, and probably served in some kind of bodyguard capacity.”

Lockley also explained that in Yasuke’s time, the idea of a “samurai” was a very fluid concept. “You don’t have to possess any particular killing skills to be a samurai,” the author said. “Anybody who took up weapons on behalf of a lord could technically call themself a samurai, or could be called a samurai.”

In the years following Yasuke’s service to the feudal lord, it’s possible that hundreds of other foreigners—from places including Africa, China, Korea—were employed in a similar way as the African warrior. “He is supposedly the first recorded,” Lockley explained. The difference is that other foreigners that followed were not in service to Nobunaga. “There are several records of Black Africans serving more minor lords, and we don’t know so much about them because the lords they were serving were more minor,” he said.

Sumō yūrakuzu byōbu, drawn in 1605 by an anonymous artist. Author Thomas Lockley said that the individual in green, in the third panel from the left, is believed to be Nobunaga. He said it's highly likely that the Black man depicted in the artwork is Yasuke.
Sacchisachi/Wiki Commons

What happened to Yasuke when Nobunaga died?

En route to a battle in 1582, Nobunaga was ambushed by his general Akechi Mitsuhide. This would come to be known as the Honnō-ji Incident, in which Nobunaga died in the Honnō-ji temple on June 21. Lockley said that Akechi and his soldiers were heading to the same battlefield, but turned around and attacked Nobunaga in an act of betrayal. “[Nobunaga] had 30 men, Akechi had 13,000 so it was a foregone conclusion,” Lockley said. Yasuke was one of the 30 men with the feudal lord.

Nobunaga was at the Honnō-ji temple at the time of the ambush. He performed seppuku, a form of ritual suicide that involves slicing open the abdomen. It’s regarded as a way of retaining honor even in defeat. “It was his last victory,” Lockley said. Instead of being killed, performing seppuku sends the message of being in control of one’s death. The ritual sometimes involves a kaishakunin, or a designated “second” who beheads the individual. “It’s a symbolic action, cutting your belly, to show the purity of your intentions,” Lockley explained. “But obviously nobody really wants to sit there while the guts are coming out.” A kaishakunin, usually a friend, would then cut off the head. Lockley said it’s traditionally held that Mori Ranmaru, an attendant to Nobunaga who was considered to be the feudal lord’s lover, acted as his kaishakunin.

Yasuke was in the temple with Nobunaga when he performed seppuku. “There’s no record, but tradition holds it that [Yasuke] was the one who took Nobunaga’s head to save it from the enemy,” Lockley said. “If Akechi, the enemy, had gotten the head and he’d been able to hold up the head, he would have had a powerful symbol of legitimacy.” Lockley explained that an act like that would have given Akechi credibility as a ruler. After the attack on Nobunaga, Akechi did not get much support and was soon defeated in battle. “Yasuke, therefore, by escaping with the head, could have been seen and has been seen as changing Japanese history,” Lockley said.

Shortly after Nobunaga’s death, Yasuke joined Oda Nobutada, the son of Nobunaga, who was nearby. “At that point, [Yasuke] fights again, a second battle of the morning,” Lockley said. “Nobutada has 200 men, not 30 men, but of course Akechi still has 13,000 so that’s again, another foregone conclusion.” On the same day of June 21, 1582, Nobutada also performed seppuku. Lockley said that Yasuke was most likely left wounded on the battlefield. The last record of Yasuke is of the man being escorted by Akechi’s troops to a Jesuit mission house.

The anime series Yasuke takes the void of knowledge post-1582 as a starting point: the Honnō-ji Incident is its opening scene. Kicking off with this historical setting, the show then dives into a reimagined, fantastical story about the legendary Black samurai.

The original version of this story misstated Africa’s geopolitical status. It is a continent, not a country. 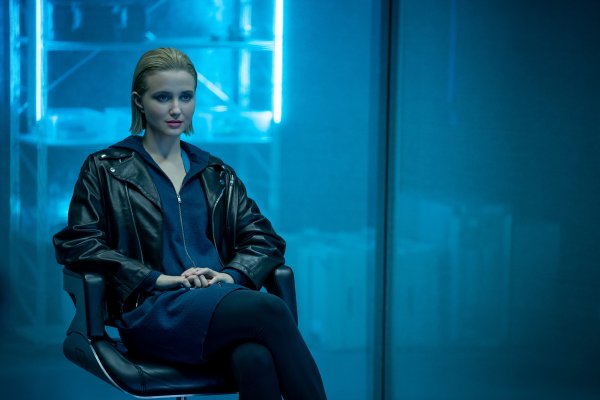 A New Season of The Girlfriend Experience Gives Us Yet Another Exploration of Tech and Male Desire
Next Up: Editor's Pick