Though some filmmakers might insist you can make a film about a hot-button issue like the refugee crisis, in the end you can only make films about people. Limbo, the second feature from Scottish director Ben Sharrock, is about people who happen to be refugees, a group of young men from various nations who have been given temporary shelter on a remote Scottish island as they wait to see if they’ve been granted asylum. Their housing, a nest of nondescript little cottages, bears a handmade sign that reads REFUGEES WELCOME with a heart appended. Some of the locals do welcome them with well-meaning but misguided enthusiasm (by offering, for instance, a clumsy “cultural awareness” course that’s designed to indoctrinate the newcomers to western ways but succeeds only in bewildering them), while others, particularly the local teenagers, inflict indifferent hostility. To the islanders, all of the men are outsiders, strangers from other lands. But they’re also outsiders to one another, a group of lost souls coming from a jumble of different cultures and backgrounds. Even so, one anxiety unifies them: no one wants to, or can afford to, be sent back.

Omar (Amir El-Masry) has come from Syria, a country his parents have also fled, though they’ve settled—and are only just getting by—in Istanbul. Omar’s older brother, Nabil, has stayed behind to fight for his country, and it becomes clear that the brothers’ forked paths have caused a rift between them. Omar is a gifted musician—like his father and grandfather before him, he plays the oud—though before he left Syria, he injured his hand and has since been unable to play. Still, everywhere he goes on the island, he carries the instrument with him, as if it were the whole of his past tucked inside a case. He doesn’t dare let go of it.

If all of that makes Limbo sound tremendously heavy, the opposite is true: this is perhaps more than anything a comedy, a picture whose dry wit recalls that of another Scottish filmmaker, Bill Forsyth, who, in the 1980s, gave us wonderfully wry comedies like Gregory’s Girl and Local Hero. Sharrock has a similar lightness of touch, even though his film has some serious underpinnings: It’s a reflection on what happens when individuals from disparate places get together and need to define, for themselves above all, what “home” means and what it means to leave it.

Omar, handsome but sullen, with soft, brooding eyes, has three roommates: Abedi (Kwabena Ansah) and Wasef (Ola Orebiyi) are from Ghana and Nigeria respectively, though they have presented themselves as brothers, hoping to strengthen their chances of getting asylum—a gentle metaphor for the way two people desperate to find a better life can become a kind of family. But Omar becomes closest with Farhad (Vikash Bhai), who’s from Afghanistan. (In one of their early encounters, Omar asks Farhad how, in his home country, it’s possible to tell what women are thinking if their faces are covered, a way of reinforcing the point that their two countries are hardly the same.) Farhad is resourceful, enterprising and sensitive: He scrounges things he needs—and some things he doesn’t, like a hat designed to look like a panda face—from the local donation center. He tells Omar about his hero, Freddie Mercury, whose picture he carries with him always: He and Freddie have the same mustache, he points out, and the same religion, Zoroastrianism. At home, Farhad had a chicken he loved, named after Mercury; in his desolate, temporary Scottish home, he adopts another, also named Freddie, who, to the consternation of the others, becomes a fifth roommate.

Farhad also becomes Omar’s agent-slash-manager, urging him to pick up the oud again. Omar’s hand has healed, but he refuses to play, or simply can’t. He’s frozen by uncertainty: Is he in the right place? Will he be able to help his parents, who, we learn from his fraught phone calls home, desperately need it? Should he return to his country to fight for it, as his brother is doing? Limbo, tender and searching, shows what can happen to people when they’re between points A and B, a nowheresville that can change the shape of a life forever. It’s also about the meaning of musicianship, of how songs and sound can define who we are and where we come from. When you think you have nothing, at least you have music. It’s a home you carry with you. 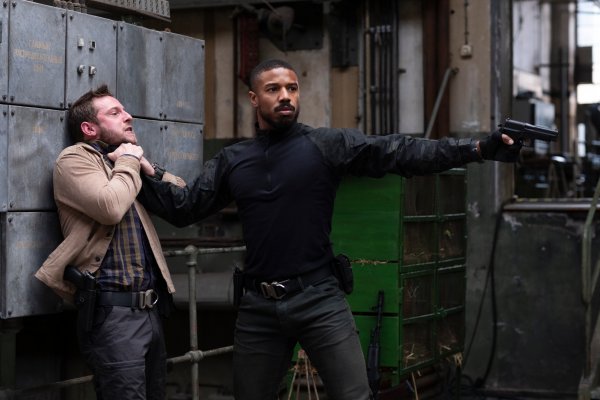 Tom Clancy's Without Remorse Unapologetically Kicks Off a Bland New Franchise
Next Up: Editor's Pick