Novelist and essayist James Baldwin.
Ted Thai—The LIFE Picture Collection/Getty Images
Ideas
By Louis Menand
Menand, a professor of English at Harvard University, is the author of the new book The Free World: Art and Thought in the Cold War. He is a staff writer at The New Yorker.

In discussions about race relations today, the works of James Baldwin continue to speak to the present, even decades after they were written. So it is worth remembering that, at the very height of his influence, Baldwin experienced the same frustration that some Black activists, particularly on campus, feel about white liberals today: their refusal to acknowledge their complicity in the regime of white supremacy. In Baldwin’s case, the liberal backlash was widespread, and effectively marginalized him for a time.

The very first piece on the front page of the very first issue of The New York Review of Books, Feb. 1, 1963, was a review of Baldwin’s The Fire Next Time by F. W. Dupee of the Columbia English department. Dupee (a former Communist Party organizer) took exception to Baldwin’s apocalyptic tone. “Do I really want to be integrated into a burning house?” Baldwin had written. The answer, Dupee wrote, is that “[s]ince you have no other, yes; and the better-disposed firemen will welcome your assistance.”

Baldwin had abandoned criticism for prophecy and prescription for provocation, Dupee said. He was goading white racists, who were in a better position to cause trouble than Black people were, “and it is unclear to me how The Fire Next Time, in its madder moments, can do nothing except inflame the former and confuse the latter.” The point was repeated by Kenneth Rexroth in the San Francisco Examiner. The Fire Next Time, he wrote, “is designed to make white liberals feel terribly guilty and to scare white reactionaries into running and barking fits.”

At the end of the year, Baldwin participated in a Commentary symposium, “Liberalism and the Negro.” Baldwin’s fellow symposiasts were Gunnar Myrdal, Nathan Glazer and Sidney Hook, the epitome of liberal integrationist opinion. It became a war almost from the start, and Baldwin’s most persistent antagonist was Glazer. This was not surprising. Unlike the others, Glazer had worked in the American government. He served in the Housing and Home Finance Agency, precursor to the Department of Housing and Urban Development (HUD), when Kennedy was president, and he had just published, with Daniel Patrick Moynihan, Beyond the Melting Pot. Glazer had written most of the book, which was based on research into the conditions of ethnic groups in New York City. He must have felt entitled to believe that he had a better grasp of government programs and of the facts on the ground than Baldwin did.

The argument of Beyond the Melting Pot is that many Americans retain their ethnic identities regardless of the degree of their assimilation in other respects, and from this it followed that Black Americans should do the same—that is, they should become like other ethnic groups. The trouble, Glazer said, is that the Negro “insists that the white world deal with his problems because, since he is so much the product of America, they are not his problems, but everyone’s.” But once he becomes willing to accept that he is a member of a group, he will be able to take responsibility for himself and other members of his community.

Baldwin knew what he was in for, and he set the stakes early on. “[T]o my mind, you see,” he said, “before one can really talk about the Negro problem in this country, one has got to talk about the white people’s problem . . . There is a sense,” he went on, “in which one can say that the history of this country was built on my back.” To the suggestion that he become a member of one of the ethnic groups competing for their share of the pie, his answer was: “What pie are you talking about? From my own point of view, my personal point of view, there is much in that American pie that isn’t worth eating.”

Glazer responded that it’s not prejudice that slows racial progress as much as ignorance, incompetence, and bureaucratic inefficiency. “[T]he problems are a product of the kind of unwieldy institutions we have,” he told Baldwin, “the kind of feudal country we have, the kind of recalcitrant special interests that have developed—among them Negro interests. And so we all fight it out.”

To this kind of argument Baldwin’s response was “if you don’t know what Ray Charles is singing about, then it is entirely possible that you can’t help me.” It is a good bet that none of the white men sitting around the table had ever willingly listened to Ray Charles. But they all wanted to help Black people, and they were being told that this was the reason they probably couldn’t.

White liberals who identified with the Kennedy Administration resented being told they were not “getting it.” But even white liberals who may have considered themselves politically purer of heart expressed impatience. With Baldwin, Susan Sontag wrote in The New York Review of Books, “passion seemed to transmute itself too readily into stately language, into an inexhaustible self-perpetuating oratory.”

The Commentary symposium was published in March, 1964. In August, Esquire ran a profile of Baldwin that had been commissioned by the magazine’s editor, Harold Hayes, who thought that Baldwin’s war on white liberals was absurd. The writer, Marvin Elkoff, dutifully portrayed Baldwin as mercurial and high-strung, and quoted him calling the white liberal “blinder, more innocent and ignorant than the segregationist,” and saying things like: “If you don’t realize that the same people who killed Kennedy also killed Medgar Evers, then you don’t understand what is going on in the world.” In the end, Elkoff concluded, “everybody was playing his [Baldwin’s] game, and of course not nearly as well . . . At bottom he is disaffiliated, a medium of emotion.”

At Christmastime, Baldwin published a deluxe boxed coffee table book of photographs with his high school friend Richard Avedon, now a successful fashion photographer. Baldwin’s essay is a cri de coeur on the banality of American life. It begins with despairing reflections on the artificiality of actors in television commercials and descends into musings like: “When a civilization treats its poets with the disdain with which we treat ours, it cannot be far from disaster; it cannot be far from the slaughter of the innocents.”

There is a way in which this boutique item, which does not present itself as a book about race, brings the precariousness of Baldwin’s position into focus. When he said things like “the history of this country was built on my back” or, in a widely publicized debate with William F. Buckley at the Cambridge Union, “I picked cotton, I carried it to the market, I built the railroads under someone else’s whip,” he was using an established conceit of group autobiography (as Malcolm X did in his autobiography, published in 1965.) The understanding is that if these things did not happen to the author, they happened to somebody like the author. The “I” stands for the group.

White people don’t write group autobiographies, however. It was not that people did not believe that when Baldwin lived in the United States, he had encountered racism and discrimination. It was that professionally, he had suffered no more, and arguably less, from efforts to censor him than, for instance, Norman Mailer or Henry Miller had. From the very beginning, he had been supported and promoted by powerful writers and editors, Black and white. He had written bestsellers: the only book that sold more copies than Another Country in 1963 was William Golding’s Lord of the Flies. He wrote for Partisan Review and The New Yorker. He had been on the cover of TIME. He hung around with celebrities; he was rich; he had an entourage. And on top of all that, he had been living in Paris for eight years, and when the Montgomery bus boycott turned out to be a success, he turned up on the scene, in 1957, and started telling everyone what it was like to be Black in America.

The New York Review of Books was ready for Nothing Personal. The headline was “Everybody Knows My Name,” and the reviewer was Robert Brustein, who was soon to become dean of the Yale School of Drama: “Now comes Richard Avedon, high-fashion photographer for Harper’s Bazaar, to join these other outrage exploiters, giving the suburban clubwoman a titillating peek into the obscene and ugly faces of the mad, the dispossessed, and the great and neargreat [sic]—with James Baldwin interrupting from time to time, like a punchy and pugnacious drunk awakening from a boozy doze during a stag movie, to introduce his garrulous, irrelevant, and by now predictable comments on how to live, how to love, and how to build Jerusalem.”

“[L]ending himself to such an enterprise,” Brustein concluded, “Baldwin reveals that he is now part and parcel of the very things he is criticizing.” Baldwin was one of a handful of Black writers who had a white audience in 1963, and he lost it. He had set the bar higher than many white liberals were willing to jump.

This essay is adapted from Menand’s new book, The Free World: Art and Thought in the Cold War, published by Farrar, Straus & Giroux. 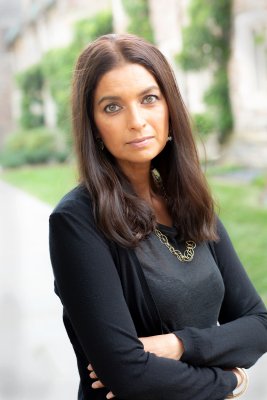 Jhumpa Lahiri on Her New Novel Whereabouts and the Power of Translation
Next Up: Editor's Pick