How the FDA's Menthol Cigarette Ban Fits Into a New Era of U.S. Tobacco Regulation

Packs of menthol cigarettes sits on a table on Nov. 15, 2018 in New York City.
Drew Angerer/Getty Images
By Jamie Ducharme

It’s easy to forget that the U.S. Food and Drug Administration (FDA) only gained the ability to regulate tobacco products in 2009, given how much it has done in the following decade-plus. In recent years, the FDA has enacted a series of regulations that have significantly shaped the ways in which Americans buy and consume nicotine.

In the last two years alone, the FDA has banned the sale of many flavored e-cigarette products and, following legislation issued by the Trump Administration in late 2019, began enforcing a new federal minimum age for tobacco sales, up to 21 from 18. A policy originally proposed in 2017 by then-FDA Commissioner Dr. Scott Gottlieb—a cap on the amount of nicotine in cigarettes, meant to make them less addictive—is now once again under discussion. And, as FDA officials announced on April 29, the agency will soon ban all favored cigars and all menthol cigarettes, the only flavored combustible cigarette products still available for sale in the U.S.

The FDA ban must still go through a rule-making process and so may not take effect for years. Even still, the policy fits into a new era of U.S. tobacco regulation—one that has already and will continue to clear the market of many tobacco products, from flavored e-cigarettes to menthol cigarettes and, maybe someday, cigarettes with enough nicotine to be addictive.

Many public-health groups say that approach is appropriately aggressive, given the nearly 500,000 Americans who die each year from smoking-related disease. The FDA’s policies have, however, earned it plenty of critics. Some lawmakers, as well as nicotine industry supporters and harm reduction advocates, consider the recent federal approach prohibitionist and draconian. And some unexpected adversaries, including civil rights groups, fear the FDA may be setting the stage for discriminatory policing practices with a new list of banned products.

The FDA’s menthol ban comes eight years after a citizen petition calling for such a move. Many public-health groups have for years vocally opposed the sale of menthol cigarettes, arguing that menthol’s cool mouthfeel and minty flavor makes cigarettes more palatable and appealing, particularly to young people. Cutting off access to menthol products, they contend, could dissuade some people from smoking, further lowering rates of addiction and tobacco-related disease.

Some civil rights groups have also called for a menthol ban, given cigarette companies’ long history of targeting menthol cigarette advertising toward Black communities. Today, according to U.S. Centers for Disease Control and Prevention data, Black adults are more likely than non-Black adults to smoke menthols, and roughly 70% of Black youth who smoke combustible cigarettes choose menthols. “The predatory marketing of menthol cigarettes and other flavored tobacco products must be stopped and we should all recognize this as a social justice issue, and one that disproportionately impacts youth and communities of color,” a group of 10 civil rights and health organizations reportedly wrote in a recent letter to Xavier Becerra, Secretary of the U.S. Department of Health and Human Services.

Opponents of such a ban argue that it could create an underground market and become a new criminal justice issue: “Such a ban will trigger criminal penalties, which will disproportionately affect people of color, as well as prioritize criminalization over public health and harm reduction,” representatives from numerous civil rights and drug policy groups wrote in their own letter to Becerra.

Proponents of the ban argue that criminal penalties would fall primarily on manufacturers and retailers, not individuals. Even before the menthol ban, there was fierce outcry from the tobacco and harm-reduction worlds over the FDA’s increasingly aggressive nicotine regulations. Recently, that conversation has largely centered around e-cigarettes.

The FDA was initially slow to act on e-cigarettes, taking years to draw up rules for their regulation in the U.S. The products were meant to give smokers a less dangerous alternative to combustible cigarettes. And indeed, most health experts agree that they are less harmful than cigarettes—though there are still not enough data to say for certain how effective they are at helping smokers stay away from cigarettes and improve their health.

E-cigarettes have been a subject of intense legal and regulatory scrutiny over the past few years, due largely to what federal health officials have called an “epidemic” of teen vaping. In an effort to curb youth vaping, the FDA in the fall of 2018 put forth new restrictions, forbidding the sale of products in all flavors except mint, menthol, and tobacco in stores where minors can shop. In early 2020, it all-out banned the sale of potentially youth-friendly flavored products—notably and controversially excluding menthol—used in pod-based systems, like market leader Juul.

Those policies have drawn praise (from anti-tobacco groups) and criticism (from pro-vaping and harm reduction groups) in almost equal measure. The Biden Administration’s efforts to add menthol to the federal ban list will surely fuel these debates. And the biggest regulatory battles are still yet to come: the FDA is expected to make a call later this year on whether to grant e-cigarette products the approval they need to stay on the market in the U.S. The agency is also reportedly considering new limits on the amount of nicotine in combustible cigarettes. Changes are coming to the U.S. nicotine market, no matter what; the question is, how dramatic they will be. 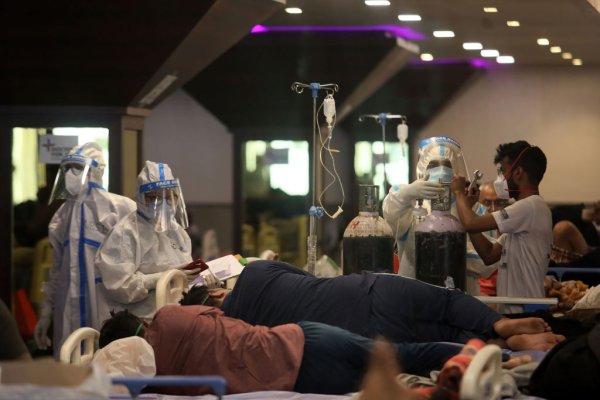 COVID-19 Variants Spreading in India Are a Global Concern
Next Up: Editor's Pick