At the Olympics, Shaun White could do no wrong. He dominates. He charms. And as a reward, he’s made millions, and become one of the most marketable American athletes in any sport. He’s had the American Express commercial, the Target clothing line. For a snowboarder, that’s rare air.

But in Sochi, White has screwed up. His explanation for pulling out of the slopestyle event — the injury risk was too great, potentially damaging chances in his signature event, the halfpipe — seems mighty fishy. It seems White knew he wasn’t going to win gold in slopestyle. He wasn’t the clear favorite coming in. So he stepped aside the day before the competition, when he could have done so weeks ago, freeing up a spot for another American. Preventing a teammate from achieving his dream is one of the worst Olympic sins.

Teammates and competitors have taken him to task. “There was a lot of guys that I trained pretty hard with sitting in that fifth spot,” American slopestyle boarder Charles (Chas) Guldemond said on Thursday, via the Wall Street Journal. (Four Americans made the slopestyle team: White, Guldemond, Sage Kotsenburg, and Ryan Stassel. The semifinals and finals are on Saturday). “It’s pretty unfortunate that they missed their opportunity to come to the Games. So that was a pretty big blow.” Guldemond said he was surprised White pulled out so late. “I knew it was coming sometime this year.” When asked why he believe that, Guldemond answered: “No comment.”

Translation: White screwed another rider over.

That rider, most likely, was Brandon Davis. Kyle Mack, 15, was fifth in the US qualifying, but the United States Ski and Snowboard Association told the New York Times that Mack didn’t have enough international points to qualify for the Olympics. (That didn’t stop Mack from sharing his bitterness. “Love how shaun drops out of the Olympics,” he wrote on Twitter. “That could have been my spot.”) Davis was next in the standings. His spot was not guaranteed if White pulled out earlier. But Davis was a good bet to replace him.

“It just kind of sucks,” says Davis, 18, from his home in Mammoth Lakes, Calif. “I was surprised to even have a chance to qualify for the Olympic team. Then I started working so hard, I was going to the gym and snowboarding as much as I could. And going to all these contests. It’s not necessarily an easy process. It’s kind of stressful. Then to come in fifth and then realize I was one of the guys close to having a spot, and then Shaun goes out there and drops out, it’s kind of a bummer.”

“I should be there, but Shaun decided he didn’t want to do it,” says Davis. “It’s not a big deal for him. But for most people, the Olympics is a whole other level. It could have kicked started my career a bit, and gotten the ball rolling. But Shaun kind of dropped out like it’s nothing.”

Davis also isn’t buying White’s logic. He’s convinced White pulled out because he didn’t think he’d win. “If he was really hurt or really had issues, he wouldn’t be doing the halfpipe,” says Davis. (The halfpipe is on Tuesday). “If every other guy out there is doing it, and Shaun is truly the best in the world, he would be able to pull it off. If I was there, I’m only a 18-year-old guy, I’m sure I can manage it. If I’m just me, and he’s Shaun White, he can’t handle it? That’s kind of unbelievable.”

Davis does have some sympathy for White. “I do kind of feel bad for him,” he says. “Because everyone, on my Facebook and social media, has been blowing up the last few days. Shaun White, I hate this guy, I hate him for this, he’s dumb for this. I do feel bad for him in the sense, he’s getting so much backlash for what he’s doing. I don’t believe he deserves it that harsh … The whole snowboarding community doesn’t really like Shaun. But ultimately, he is the face of our sport, there’s not point in hating on him so hard.”

“He’s the hardest working guy in our sport. And he certainly deserves respect.”

Many snowboarders think White is aloof. “Most of the snowboarding community is friends with one another,” Davis says. “He’s apart from everyone. He’s the lone wolf. When he goes out there for a contest, he goes out there to win. He trains hard for it and all these things. Other snowboarders pretend ‘oh, we don’t need to win. We’re all buddies.’ While Shaun is a little bit different, he just gets a lot of hatefulness for that.” Davis, however, does look up to White. “I mean, he is the best at what he does,” Davis says. “A lot of people, honestly, would almost hate on me for looking up to Shaun.”

Although he’ll have to watch the competition from California, Davis says he’s holding up well. “I was bummed about the Olympic thing for a little while,” says Davis. “But then I started relaxing.” Turns out, an 18-year-old snowboarder can teach us all about perspective. “I’m not at the Olympics,” Davis says. “I could not be having food. It’s a quality problem to have, that’s for sure.” 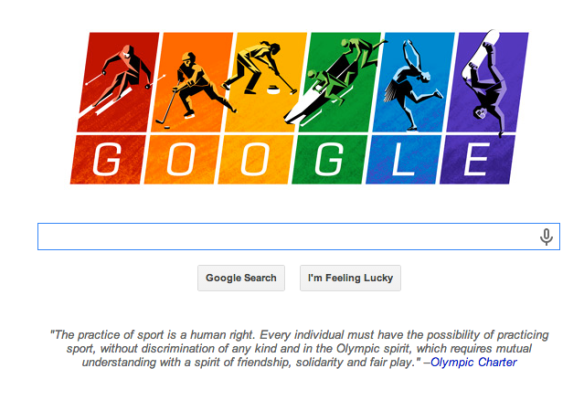 Google Doodle Upholds Gay Rights Ahead of Sochi Olympics
Next Up: Editor's Pick