The Softer Side of Pit Bulls

Katie Larkin met her first pit bull during college in the 1980s, when a friend brought home a small, muscular terrier with short fur and a big, square head. “He was adorable,” Larkin recalls of Kilroy. “But anytime I walked him, people would cross the street.”

That reaction is familiar to many owners of pit bulls, whose aggressive reputation and association with dogfighting have made them one of the least adopted and most euthanized breeds in the U.S., according to shelter operators. It isn’t even legal to adopt or own a pit (unless it’s a guide dog) in Miami or Denver, which are among the more than 300 municipalities that ban the dogs. So unloved are pit bulls–a term that refers to several terrier breeds with shared lineage–that they are routinely the most common dog in shelters nationwide.

Those daunting statistics led Larkin in 2010 to found Angel City Pit Bulls, a Los Angeles organization that works to increase pit adoption. The group is part of a loose network of pit lovers across the country who are trying to rehabilitate the reputation of America’s most reviled dog. Through social media, the power of celebrity–actress Jessica Biel tweets weekly pictures of her pit with the hashtag #TuesdaysWithTina–and outreach efforts at decidedly gentle settings like schools and nursing homes, these advocates are making the case that pit bulls are no more dangerous than any other furry friend.

Media coverage and the tallies of dog violence based on them say otherwise, including a compilation of news reports by DogsBite.org a dog bite victims’ organization, which found that pits were responsible for 52 of the 88 U.S. deaths from dog attacks from 2006 to 2008. Yet in controlled studies, pits have never been identified as “disproportionately dangerous,” according to a 2012 American Veterinary Medical Association paper that advised against banning the breed.

One reason for the discrepancy is that people are bad at identifying a dog’s breed, and the stigma surrounding certain breeds can play a role. A peer-reviewed study in the American Journal of Sociological Research in March asked vets, shelter workers and other animal professionals to identify the dominant breed of various mutts based on video images. Their performance was poor. The Centers for Disease Control acknowledged this inexact science in 1998, when it stopped categorizing dog bites by breed on the grounds that “there is currently no accurate way to identify the number of dogs of a particular breed, and consequently no measure to determine which breeds are more likely to bite or kill.”

The focus on breed can obscure another crucial arbiter of a dog’s behavior–its owner. “There are a few predictors that will create a problem dog,” says Jane Hoffman, president of the Mayor’s Alliance for NYC’s Animals, a coalition of animal-rescue groups and shelters. Among them: “If they’re kept in the yard, don’t have interaction with people or other dogs and aren’t neutered.” In other words, a dog’s lineage matters less than how it is conditioned. “But the popular imagination always has to have some kind of demon dog,” she says.

The goal of Larkin and other advocates is to expand the popular perception of pits from a single behavioral type–the demon dog–to include what they used to be known as: America’s family dog.

Pit bulls date to the late 18th Century, when dogs tended to be categorized by the jobs they performed rather than how they looked. “Until about 200 years ago,” says Bronwen Dickey, who is writing a cultural history of pits, “a terrier was any dog that dug for vermin. A bulldog was one that caught errant cattle.” These two working farm dogs are believed to have been crossbred around 1790, leading to the bull terrier.

This type, the genetic forebear of today’s pits, “became enormously popular,” Dickey says. The dogs served in the military–a pit accompanied the 11th Infantry of Pennsylvania at the Battle of Gettysburg, and the first U.S. Army dog promoted to sergeant was a pit–and had flashes of stardom. Helen Keller’s dog was a pit, as was Petey, the Little Rascals’ dog.

This changed around 1976, when curbs on animal-fighting ventures were added to the Animal Welfare Act, according to Donald Cleary of the National Canine Research Council. Pits–often trained as combatants–came to be seen as dangerous. Throughout the next two decades, stories about vicious pits mauling innocent children appeared in news outlets across the country, drawing the curtain on their family-friendly reputation.

Pits are capable of violence, says Chris Schindler, who has seen plenty of it as the manager of animal-fighting investigations for the Humane Society. “Every dog has individual behavior that’s going to develop over time,” he says. “That’s not something that can be predicted.” It can, however, be trained. “Police and people who train guide dogs don’t just go on Craigslist and pick up a dog of breed X,” says Kristopher Irizarry, a geneticist at the veterinary college at Western University of Health Sciences, who noted that such training can cost tens of thousands of dollars.

Pits aren’t the first dog to be considered a menace to society. In the late 1800s, the country’s breed of concern was the bloodhound, which was often used during that time to capture escaped slaves. The majority of dog attacks reported in Northeastern newspapers from 1864 to 1899 were by bloodhounds, according to Cleary’s colleague Karen Delise. And the period after World War II saw a spike in reports of attacks by German shepherds, a breed associated with the Nazis.

One recent morning, Larkin was outside L.A.’s Exposition Park with about 70 pits at a free training session run by Cornelius “Dog Man” Austin. Celena Rios, 30, and her husband Albert were there with their two pits, Amor and Cupcake, who has the disarming habit of sitting on strangers’ feet. “People are amazed at how friendly they are,” Celena says.

Amor and Cupcake are the kind of breed ambassadors that Angel City Pit Bulls and their allies are trying to cultivate. “We pull dogs with a specific disposition from shelters,” Larkin says. “People-responsive, easygoing dogs that can be placed in any environment, we train and place in new homes.” The idea is that these strategically chosen pooches will have a pit-bull multiplier effect: the more Amors and Cupcakes people see in their communities, the more that will improve the breed’s reputation.

The old stigma was behind the Washington, D.C., Humane Society’s policy of putting to sleep any dog it identified as a pit, which accounted for the majority of the dogs in its shelter, says CEO Lisa LaFontaine. She ended the rule when she took over in 2008 and says adoptions have since doubled, while returns have fallen to below 5%.

Larkin has seen a similar change in Los Angeles. “Our adoptions have gone through the roof in the past year,” she says. “We have a waiting list.” At PAWS, a large shelter in Chicago, adoptions of pits and pit mixes are up 600% since 2007, more than double the increase in adoptions for all dogs, according to founder Paula Fasseas. The dogs are especially popular among single women. “They appreciate having the dogs with them,” she says, “because pit bulls are perceived as dangerous.” 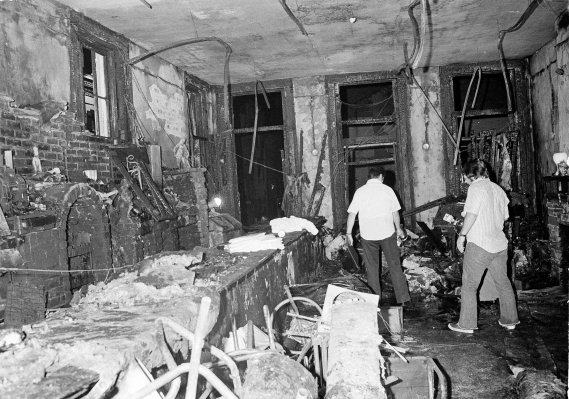 The Horror Upstairs
Next Up: Editor's Pick