Nikki Sixx Says Goodbye for Good: Inside the End of Motley Crüe

After over 30 years of grinding guitars, wild stage shows and world-class debauchery, the Crüe — who made nine albums that sold a staggering 80 million copies — decided to end it all. Being the Crüe, though, they’re going out in style. The band —Nikki Sixx, Vince Neil, Tommy Lee and Mick Mars — signed a legally binding Cessation of Touring Agreement in front of reporters that prohibits future, unauthorized performances, and prevents any of the four members from touring under the band name.

But before they go, there’s one last 72-city North American tour to complete, and they’ve enlisted veteran rocker Alice Cooper to open the band’s final string of shows.“When it comes to putting together a new show, we always push the envelope, and that’s part of Motley Crue’s legacy,” bandmember Nikki Sixx said.

We talked to Sixx about why Motley Crüe decided to end this chapter:

TIME: It’s safe to assume you are planning something special for your plans for Motley Crüe’s last shows, right?

NIKKI SIXX: Yeah. You know, you don’t want to reveal too much because it blows the surprise. I remember back in the ‘80s, bands would come to opening night and come to see what we were doing, because we were always changing it. Then they would fly back to LA and shoot their video and release it and we would see it on MTV and we would see it and say, “That’s our f—ing show!” It was like, what the f—! They just wanted to copy us. Music execs would even say, “We need three guys with black hair and one guy with blonde hair and you guys need to be rebellious.” What is this, f—ing American Idol 1985?! So we started to be really private.

The band has always prided itself — even when we were a club band — on pushing it as far as we could push it. If you look back to 1981 at shows at The Whiskey, we played them like they were stadium shows, but they were only to 250 people. It’s just what we do. We were doing it for no money, building stuff ourselves. Vince was an electrician and he would wire up some lights and build a drum riser — Tommy would cut the wood and me and Mick would paint it. It was all about making our show bigger and bigger and bigger. It’s something we continue to do, but now we incorporate technology and try to push the boundaries that way. That’s where we are now — we’re at a place where we are looking at what’s out there and what we can use. Sometimes we go back and look at s–t from the old days. We’re looking at stuff from the ‘70s and ‘80s and mixing things to create a new breed of stuff. That’s exciting to me and what I think is going to be different. Because this is it.

Do you feel pressure to go out with a bang?

No. Because we always want to go out with a bang. I think we will be the best show on the road. We’ve always been first. Even when we were playing in the clubs, people would tell us, “I’ve never seen or heard anything like that before.” Back then, it was the Dead Kennedys and Fear and the Circle Jerks and punk rock bands. Then there were these other kids who were kind of disgusted with The Plimsouls and The Go-Gos and The Knack and were trying to grow their hair out and they were kind of somewhere between punk and glam and kind of a mish mosh and that’s what Motley Crüe was —half punk, half heavy metal. People were saying they had never seen a band like us, that it was a game changer.

So I know what it feels like to be first. If we had only done one record, I would be sitting here today thinking, “Wow, we did something totally different than everyone else.” That’s a very prideful thing for me. I’ve been first, but I’ve never been last. I don’t know what it will feel like for the fans or the band. The second the band intro starts for the show, there’s going to be a welling up of emotion, of thinking this moment will never happen again.

Why end the band now?

Now is better than later. We’re at our peak now. We’re making a movie of The Dirt. We are still selling out arenas everywhere we go around the world. It’s the original four guys. The concept of hobbling off into the sunset with only two of the original guys in the band doesn’t appeal to us. That’s not the band that came up listening to the Ramones and AC/DC’s “Dirty Deeds” and going, how do we make those two bands into our band? The very first show, Vince and I ended up in the crowd in a fist fight! That kind of set a precedent for who we are and what we do. Being such huge rock fans, so many before us have let us down and been sort of embarrassing. You have to squint your eyes and they kind of look like the same band. We play a lot of festivals and I’ll hear that so-and-so is on the bill and I’ll run up to the side of the stage to see them and say, “I know they’re older, but I don’t recognize anybody” and Vince will say, “Oh the only guy in the band is the drummer’s brother.”

Right. You don’t want to end up like Black Flag where you end up apologizing to your fans for your lousy album and promising to do better.

Right, there are bands out there traveling under the same band name. Tommy said it would be like, “Nikki Sixx’s Motley Crue at the Troubadour” and “Tommy Lee’s Motley Crue at the Canyon Club,” and they are all within a week of each other, you know? I can’t get into my car and drive down the road and have that be a reality. Not after everything that we’ve done. Not after everything we’ve been through. Someone said to me from a finance firm who deals with branding — I know the weirdest people, from f—ing junkies to billionaires — and he says to me, “This is brilliant marketing!” but honestly we didn’t think about it that way. We just wanted to have pride in the band when the band is done forever. If you put on a Crüe t-shirt and walk down the street we want someone to say, “The Crüe, man, those guys came in and went out on their own terms.” We want our song to come on the radio and for you to turn it up a little bit louder, because you were there on the last tour.

It is a suicide pact! Someone else said, “You know you’re leaving a lot of money on the table” and I said, “Yeah, but we’re taking our pride.”

It also feels like you are throwing down the gauntlet to these other bands who are touring with one original band member’s brother.

Yeah. A radio personality friend of mine texted me and said, “You kind of f—ed it up for everybody,” because the next time someone announces they are done, people will want to know, is it a farewell tour like Motley Crüe did? Are you signing a contract? Is this a real farewell tour, or are you going to be back in three years? The word “farewell” is loaded. When we first started talking about this as a band, we used the word “farewell” a lot, because we didn’t know of another word. We said we should probably talk about the end and how we bow out gracefully and take our legacy and secure it in history, and we kept using the word “farewell,” and we realized that the word smells of a lie.

We were in Japan and I made a joke that our jet could go down and explode in flames and we all die. That’s a pretty good idea! We would go out the way we came in. Vince said, “So how are we going to find a pilot?” It’s funny, but I said, you know there is some version of this that needs to be our story. We knew if we got the movie [The Dirt] right — that’s when we should go. We needed it to be right, with the right production team and the right director behind us. Jeff Tremaine is that guy. He knows that this is not Rock of Ages or Rock Star. This is Trainspotting or Boogie Nights. So when people ask why now, it’s because we have The Dirt.

It seems like you and the band are very concerned about your legacy and making sure it is properly represented in the film and in history. What do you think that legacy is or should be?

Vince was asked that the other day and he said, “That we did it our way,” and I agree. Remember, no record company wanted to sign us. They thought we were a joke, so we figured out how to form a record company and how to fund it and how to take that music that we recorded and find someone to distribute it. We sold 40,000 copies of that record and all of a sudden, everyone believed in what we do. The one thing that Vince didn’t mention is that when you really love an artist — what I think is the real legacy — is that when you take away their looks, take away their history, take away everything — whether it’s Jimmy Hendrix, Ray Charles, Led Zeppelin — you take away their entire lifestyle, and what is their real legacy? It’s the music. In the end, that’s it. When we’re in band rehearsal, it’s just the four of us in a dirty little rehearsal room with a half-eaten box of pizza just pounding through those songs. We put a lot of work into those songs. They are our legacy.

As the Crüe draws to a close, do you find yourself looking back and feeling sentimental?

Little bit. Starting to get some pangs here and there.

Is there a particular album that you’re looking back at most fondly?
Too Fast For Love. I remember being in the recording studio with the guys and we were so amped up. Remember, no one believed in us and we were in the studio, just going for it and we didn’t know if anyone would ever hear it. We were like, f— it, playing bars and clubs and slugging it out. We learned very early how to promote ourselves in a way that was bigger and louder than anyone else, but no one believed in us! No one would finance us to make a record. But we sold 40,000 copies! There was no advertising, there was nothing, just us slugging it out, playing. It was kind of magical. I think back on that now and it’s like, man, the same four guys who thought “What are we going to do? Let’s do it our way!” If you think back on that, you might have a tear in your eye right now.

MORE: Johnny Marr on the Smiths, ‘The Messenger’ and Going Solo After All These Years
MORE: Mötley Crüe’s Vince Neil on Sex, Drugs and Rock ‘n’ Roll 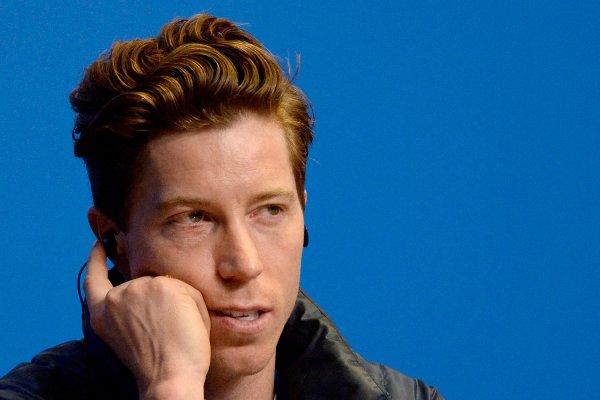 Shaun White Pulls Out of Snowboarding Event
Next Up: Editor's Pick