For good or bad, the pandemic’s economic forces reshaped Americans’ personal finances over the last year. Everyday expenses including commuting fares, daycare and leisure activities like travel and dining out dropped off family budgets. At the same time, millions of households lost income due to layoffs, furloughs and reduced work hours, making it more difficult to cover remaining expenses, like groceries and rent or mortgage payments.

Circumstances have varied so much from family to family that it’s hard to describe the collective national experience. But a recent report from the Urban Institute, a left-leaning think tank, finds that on the whole, Americans experienced less material hardship in 2020 compared with 2019. The reasons for this are numerous and complex, but the analysis suggests that federal pandemic relief measures played a significant role in mitigating financial adversity.

“We can’t isolate the effect of the federal relief efforts from the effect of other factors, but I think it’s unlikely that we would have seen improvements in average wellbeing if not for a very strong federal response,” says Michael Karpman, a senior research associate at the Urban Institute and one of the report’s authors.

The report found that, between Dec. 2019 and Dec. 2020, the share of American adults experiencing food insecurity dropped from about 24% to 20.5%, the share having difficulty paying medical bills fell from nearly 19% to less than 15%, and the share experiencing utility shutoffs went down from 3.8% to 2.6%. Karpman calls these improvements “very surprising” in light of 2020’s sharp economic contraction and highest unemployment levels in decades.

The findings come from annual survey data about food, housing and household bills. These metrics are evaluated based on questions such as whether a respondent is able to access food, or has skipped meals, or ever went hungry. A “yes” to these questions would signal food insecurity, whereas a “no” would signal food security—regardless of whether the person obtained food by their own means or with help from a federal program or a charity.

Expanded food assistance programs, rent moratoriums, supplemental unemployment insurance benefits and direct economic impact payments all helped cushion the blow for families that lost work income. The measures also helped low-income families that had no change in employment—for them, a broader safety net offered a buffer against hardships that predate the pandemic. Since the beginning of the COVID-19 outbreak, the federal government has provided $5.4 trillion for pandemic-related relief programs, including small business loans, educational support, public-health spending and government aid.

Some pandemic relief programs helped families cover basic needs by boosting their income. The report points out that some low-income workers who qualified for expanded unemployment insurance benefits received more than when they had been fully employed. On top of that, the direct economic impact payments offered people who hadn’t lost jobs—including higher-income families—a cash bump. A real-time poverty tracker from the University of Chicago shows that poverty levels dipped following the two direct payments last year before climbing again.

In the U.S., higher income is associated with lower levels of hardship. Although the Urban Institute report did not measure change in financial health, its conclusions complement other economic markers showing that Americans are generally in better financial shape now than they were before the pandemic. For instance, the U.S. personal savings rate, which reached a high of 7.5% in 2019, hasn’t dropped below 12.5% since March 2020, according to the Bureau of Economic Analysis. And average consumer credit scores hit an all-time high of 710 in 2020, according to Experian data.

Still, the news isn’t all rosy. While the average American adult may be more able to meet basic needs, the Urban Institute report cautions that “this average obscures the substantial hardships among families who lost work.” The survey found that nearly one in three people who had lost a job in 2020 received food from a charitable program. That amounts to millions of people—when the survey was issued in December 2020, about 9 million fewer adults were employed compared with the previous year.

“It’s important to not lose sight of the fact that families that lost jobs are still struggling very much,” says Karpman.

The report also cautions that the positive impacts may be temporary, or predicated on a tradeoff. For example, that fewer people are having trouble paying medical bills may be a result of postponed medical care or treatment, which could cause a bigger problem down the road. Similarly, people reporting no problems paying rent or mortgage may be relying on eviction moratoriums and sympathetic landlords. They may face a large, overdue rent bill in the future.

Indeed, about 3 in 5 adults who had pandemic-related wage losses believe the pandemic will make it harder to achieve their long-term financial goals, according to a Pew Research Center survey from March. And among adults who did not lose wages, 2 in 5 believe the same.

The Urban Institute report did not capture effects of the most recent federal relief measures that passed in March. But those measures, like the 2020 relief programs, were largely one-off or temporary. Karpman says lower levels of hardship last year, in conjunction with the heightened risk of future hardship, may offer an argument for keeping some pandemic relief programs even after the pandemic is over. The expanded safety net “could further reduce levels of material hardship in 2021,” he says. “But the long-term effects of this legislation will depend on whether Congress makes that expansion permanent.” 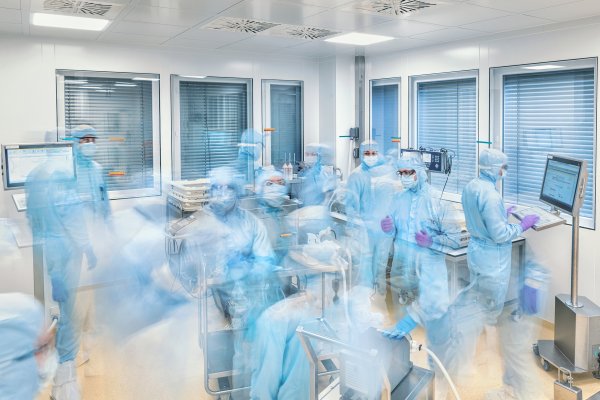 How the World's Most Prevalent COVID-19 Vaccine Is Made
Next Up: Editor's Pick