Turkish citizens have taken to the streets to protest their government’s decision to withdraw from the European treaty on violence against women and domestic violence, the Istanbul Convention. As its name suggests, this human rights treaty was championed by Turkey when it was first created a decade ago. It requires governments to legislate against—and prosecute—violence against women and girls, including domestic violence, rape in marriage and female genital mutilation. The Turkish government claimed that the treaty was being used to “normalize homosexuality” and undermine Turkish family values. Critics say this is an attempt by the government to increase its standing with conservative allies at the expense of women and minorities. I spoke to the Turkish-born novelist and thinker Elif Shafak about her views on the crisis. She and I first began speaking last year, at the start of the pandemic, drawn together by a shared focus on refugee issues. I reached out again after this latest news. We spoke about the men and women fighting for Turkey’s decision to be overturned, and what it tells us about the state of women’s rights globally. “We are at a crossroads”, she told me. “Many women are demanding equality, demanding justice. They want to build their own lives, build a better future for their children. But this shift in power comes with a dangerous backlash.”

I began by asking Elif about the Turkish government’s decision to withdraw from the treaty, and what it means for women’s rights in her motherland.

Shafak: I think this is a major setback, which will have catastrophic consequences for women, for children, and for the LGBTQ community. The Istanbul Convention is the most progressive international treaty we have that protects anyone who is vulnerable to violence. It provides legal networks, it opens shelters, it raises awareness, it protects victims and prevents violence—if it is implemented. Turkey was the first country to sign and ratify this treaty, but now it is abandoning it. It breaks my heart, because it is happening at a moment when femicide cases are increasing. There was already an escalation in domestic violence cases in Turkey. At a time when women needed protection the most, the government is doing the exact opposite.

What message does it send to a young woman who might be experiencing violence in her own home? Pulling out of the Convention has a double message. You are telling women that their lives are not important. And you are telling perpetrators that their crimes will be legitimized. It emboldens perpetrators of violence.

Rollbacks of women’s rights are often justified by those responsible as a defense of family values. As though it is better for violence to remain behind closed doors. What’s your answer to this? It is not a private issue if someone is hurt, if someone is suffering abuse. It cannot stay behind four walls. We need to break those walls of silence. No one can be happy in a house where there is abuse, where there is a violence. Then there are these incredibly problematic laws in many countries which reduce the sentences given to rapists, should they agree to marry their victims, as if they are doing their victims a favor.

Can you give an example? One case immediately comes to mind—the trial started recently in Turkey. A young Kurdish women was raped by her husband’s brother. She was brave, she refused to be silent about it. She wanted to take the perpetrator to court, but in court she was not given a Kurdish-speaking interpreter. She could not tell her own story. And then her husband came and he killed her, because she was ruining the family’s honor. This says so much about the intersectional layers of oppression, for minority women, women with disabilities, transgender women, indigenous women. The whole system favors the perpetrators and punishes the victims over and over and over again.

It’s so horrifying. And it is is happening right now. We need to talk about all this louder and louder because the pandemic made everything worse. It increased domestic violence all across the world. In many countries when we look at the number of people calling helplines, those calls have increased five-fold. Women and girls have been in close environments with their abusers. This has happened throughout the pandemic. And we need to talk about the catastrophic economic consequences of the pandemic for women as well. I think we are losing decades of progress, in terms of women’s rights, equality. Decades of progress is gone.

There are so many good men around the world, who fight to defend women. In my work with refugees, I meet men who have lost everything and risked their lives to protect others. How do we encourage that beautiful strength, rather than the destructive strength—the oppressive strength? Patriarchy makes women unhappy, but it makes men unhappy too. Men cannot be happy in a society built on inequality and discrimination—especially young men who do not conform to the given description of masculinity. Men need to be engaged in this conversation.

Sometimes it’s hard not to be overwhelmed. What keeps me going is thinking that we are in the fight. If we look to history, there must have been times when everything seemed lost. So we just have to double down, and keep pushing. We are at a crossroads. Many women are demanding equality, demanding justice. They want to build their own lives, build a better future for their children. But this shift in power comes with a dangerous backlash. When countries slide backwards into nationalism, into tribalism and isolationism, into populism or authoritarianism or religious fundamentalism, we always see a rise in sexism and homophobia. Whether you are in America, Canada, New Zealand, Australia, Turkey, the Middle East, wherever we are, we can slide backwards.

One of the things I’ve realized from the refugees I’ve met around the world is how similar basic human struggles are and that our societies and our rights are actually quite fragile. How do you see it? We are so interconnected. The pandemic has shown that. Whether it is the possibility of another pandemic, ecological crisis, cyberterrorism or a financial crisis, every major issue shows that we are interconnected. By creating imaginary walls around us, we are not going to be safer. Democracy is not robust. It is a very delicate ecosystem of checks and balances. The ballot box in itself is not enough to sustain a democracy. Many countries which are not democracies hold elections. Turkey has relatively regular elections, Turkey is not a democracy. Russia has elections, Russia is not a democracy. We need rule of law, checks and balances, freedom of speech, free media. And women’s rights. With all of these rights we can talk about democracy. Otherwise we are just talking about majoritarianism. And from majoritarianism to authoritarianism is a very short slide backwards. It can happen very fast.

That interconnection also means we are able to see each other more, and connect more, across the world. It is harder to keep us apart. As human beings, we rarely learn anything from sameness. We learn from differences. We are challenged by differences. It really matters. It is not a coincidence that societies where democracy is lost are societies where there is no appreciation of diversity, where if you are deemed to be different life is going to be difficult. My last novel was inspired by a place in Istanbul called the cemetery of the companionless. Unlike other graveyards there are no flowers, no visitors, no names engraved on marble tombstones—just wooden posts, and placards with numbers scribbled. It is a place where actual human beings are turned into numbers. Most of the people who are buried there have been shunned. My instinct as a writer was to try to take at least one of those numbers, and to reverse the process. I think that is a big part of our struggle—to resist that process of dehumanization.

Are you worried by the intent we see among politicians and some others to try to dehumanize refugees in particular? Words matter. Everything else comes later. It doesn’t start with concentration camps, it starts with words. How we talk about the ‘other’ matters. Words like ‘infestation’, ‘vermin’, ‘pollution’—none of that is innocent. We need to educate ourselves as well as each other. Sometimes we might use certain words in the wrong way, but we should be able to learn from each other. I find it very important that we are aware of how we employ words, how we choose words, especially when we are talking about people who seem to be different to us.

I hope there will be more discussion, among young people and old people, trying to speak up, to raise each other up. We are in a fight, and we need to watch out for each other. We are. We started talking about Turkey. Women have been out on the streets. They have been amazing, remarkably brave. But there also was this image of a young man with a banner saying ‘real men are feminists’. I will not forget that. It gave me so much hope. We have allies, all across the world. It is very important that we hear each other’s voices. 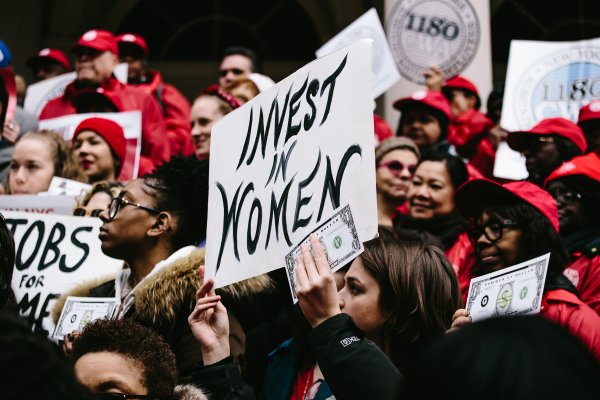 The Gender Gap Will Take an Estimated 135 Years to Close
Next Up: Editor's Pick