The Story Behind TIME's 'Climate Is Everything' Cover

To illustrate the dramatic effects of climate change on our interconnected world for the April 26 issue of TIME, we turned the cover canvas over to “an artist who paints without a paintbrush.”

Malaysian artist Red Hong Yi spent two weeks creating an image that is part sculpture, part performance art. She and her six-person team constructed a 7.5 x 10-foot world map out of 50,000 green-tipped matchsticks. She then set the artwork on fire—representing how the global climate crisis touches all of us, no matter where we live.

Photograph by Annice Lyn for TIME

Photographs by Annice Lyn for TIME

Red designed the dimensions and positions for the matchsticks on a computer, laser cut the holes onto a board and then began the painstaking task of inserting each one by hand. Her team also sprayed layers of fire retardant paint, both on the front and back of the board to make sure the fire didn’t take over the entire piece. The green matchsticks, placed at varying heights for topographic effect, served as a metaphor for trees.

In nearly 100 years of TIME covers, never has a work of art been so drastically transformed in the process.

Photographs by David Yeow and Annice Lyn for TIME

“I think it was just the race against time and it was fun building that together, but of course we knew it would be burned down,” Red says. “The whole idea behind that was it takes a long time to build something up, but it can be destroyed really quickly, too.”

Red started her career as an architect and received her Master of Architecture degree from the University of Melbourne. About nine years ago, she posted a video of her dribbling a basketball covered in paint to create a portrait of NBA star Yao Ming. That video went viral and led her to pursue art full-time.

“When I approach my art projects, I think like an architect. Most of the people on my team are architecture graduates,” says Red. “It’s very planned and I think I approach it in a kind of a designer-esque way.”

That approach is clear in Red’s past work, which includes a portrait of Jackie Chan made of 60,000 chopsticks; an installation for a tech company in Singapore made of salt; a portrait of artist Ai WeiWei using 100,000 sunflower seeds; a portrait of Adele made of 1,500 melted candles to illustrate her song “Set Fire to the Rain;” and 20,000 teabags collected and stained to create an everyday local scene in Malaysia of a man making pulled tea—a piece that was commissioned by the World Economic Forum in Davos. This is Red’s first cover for TIME.

Recently, she created a series of incredibly personal and emotional pieces titled “I Am Not a Virus” which addresses rising anti-Asian violence and racism over the past year.

“Race and ethnicity has always been a topic that’s very, very uncomfortable to me. And so it was pretty emotional to create that piece and talk directly and openly publicly about it on my platforms,” said the artist. “When I spoke to a lot of my Asian friends about it, a lot of them, like me, have experienced it directly. I believe that similarly, people from all sorts of backgrounds have to stand up and speak up about this. When the pandemic happened, I was getting my work visa processed, friends in the U.S. said it might not be a good time to come over because of the numbers and also because of, well, the color of our skin. And I think that prompted me to want to create those pieces.” 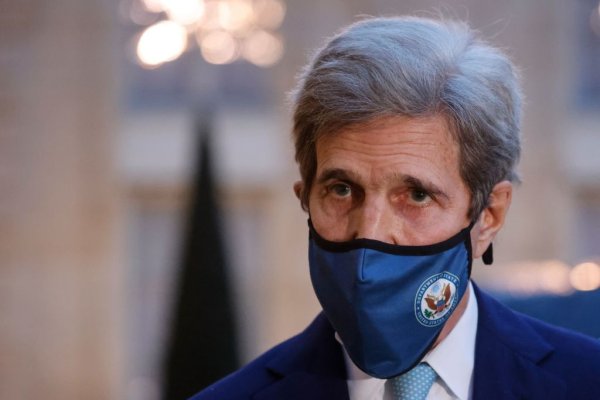 What's at Stake in John Kerry's Trip to China
Next Up: Editor's Pick