In two studies published in The Lancet Infectious Diseases and in The Lancet Public Health, respectively, scientists provide comforting news about a new strain of the COVID-19 virus that emerged from the U.K. last December. It has since become the dominant virus in the region, accounting for nearly all of the new COVID-19 cases there—and has recently been implicated in spikes in parts of the U.S., as well as other parts of the world.

The researchers report that the so-called B.1.1.7 variant of the virus is not linked to more severe disease or death, and that the virus isn’t causing different (or higher numbers of) symptoms among those infected compared to previous strains of SARS-CoV-2. But they also stress that their findings aren’t the final word on the impact of the variant. Indeed, the results conflict with those of another study published last month in Nature, which found the opposite outcome among hospitalized patients. In that study, the B.1.1.7 variant was linked to an increased risk of dying from the disease compared to other variants.

In the study published in Lancet Infectious Diseases, scientists led by Dr. Eleni Nastouli associate professor of infection, immunity and inflammation at University College of London, sequenced the virus obtained from samples from 341 people who tested positive for COVID-19 at two hospitals in the U.K. between November and December 2020, just as the new variant began to spread there. About 58% of these people were infected with B.1.1.7, and the researchers compared the severity of their disease with that of people infected with the other common circulating virus strain at the time, D614G and found no significant differences. Some 36% of those with B.1.1.7 became severely ill, compared to 38% of those with the other strain. People infected with B.1.1.7 were also no more likely to die than those infected with another strain of the virus.

“We didn’t find an association between severity of disease with the variant after adjusting for other factors [like age, ethnicity and other health conditions],” says Nastouli. She and her team did, however, find that people infected with B.1.1.7 were more likely to have higher viral load in their nasal and throat samples than those infected with the previously circulating variant. That’s in line with other studies showing that B.1.1.7 is more transmissible than previous versions of the virus.

The study from Lancet Public Health similarly found B.1.1.7 was linked to increased likelihood of transmission—in this case, the research suggested a 35% higher rate of transmissibility compared to the previously circulating strain. This research is based on a completely different data set than was Nastouli’s; in this case, the raw data come from 36,000 participants of the COVID Symptom Study, an ongoing survey of four million people in the U.K. who enrolled to download an app and record daily how they are feeling and any symptoms they may experience, as well as results of any COVID-19 tests they took. The researchers combined these self-reported data with genomic data from the COVID-19 Genomics U.K. Consortium, which randomly sequences viruses from positive test samples in the U.K, to figure out what proportion of positive tests included the B.1.1.7 variant. That gave scientists a proxy for evaluating whether people more likely infected with B.1.1.7 experienced different symptoms or disease than those infected with other versions of the virus.

“We didn’t find any change in the type of symptoms experienced or the total number of symptoms among people with B.1.1.7,” says Mark Graham, research associate at King’s College London and lead author of the study. That’s important, he says, because it confirms that current screening and testing methods can effectively pick up cases of the variant.

Graham and his team were also able to explore another critical question: whether exposure to B.1.1.7 would lead to reinfection among people who have previously recovered from COVID-19 with the previously circulating strain, or among people vaccinated against the disease with the currently authorized shots. They looked specifically at those who reported having two positive COVID-19 tests within 90 days, and since very few fell into this category, determined that the rate of reinfection with any version of the virus was low, including in areas where B.1.1.7 cases were relatively higher. That suggests that B.1.1.7 was not leading to appreciable reinfection among people previously infected with another version of the virus. The data, Graham says, “suggests that B117 doesn’t really have a substantial effect on reinfection, and immunity developed from previous infections with COVID should sufficiently protect against B.1.1.7. It also suggests that vaccines developed against previous variants will be protective against the new B117 variant.“

Those conclusions are supported by recently reported real-world data from Israel showing lower infection rates—even among people infected with B.1.1.7 and other variants—if people are vaccinated against COVID-19.

So why do other studies show higher rates of severe disease and mortality among people infected with B117? One reason, suggests Nastouli, may have to do with the different populations studied. Her study focused on people sick enough to need hospitalization, while, for example, the Nature study from March that found more severe disease relied on community level data from people not seeking care from hospitals. “They don’t conflict necessarily; they are just studies done in different settings,” she says.

The researchers on the Nature paper also did not use genetic sequencing from positive samples to confirm presence of B.1.1.7 as Nastouli and her team did, but depended instead on another method of detecting the variant that was a little more indirect, and possibly less accurate.

How reliable either set of findings are needs to be confirmed with more data involving genetic sequencing of the virus from people who test positive, says Nastouli, and more studies in places outside of the U.K.—like the U.S.—where B.1.1.7 is growing. 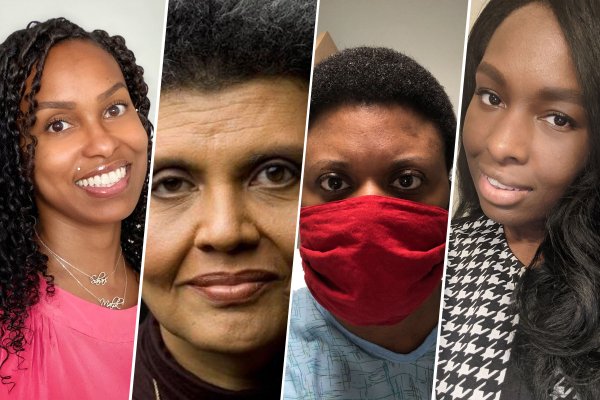 Black Women Fight For Recognition as Long COVID Patients
Next Up: Editor's Pick