One-Third of U.S. Troops Opted Out of the COVID-19 Vaccine. Here's Why That Is Dangerous for National Security

Ideas
By Seth Moulton and Tammy S. Schultz
Moulton, a Democrat, represents Massachusetts's 6th Congressional District. He served as a Marine Infantry Officer in Iraq. He is the co-chair of the House Armed Services Committee’s Future of Defense Task Force.
Dr. Schultz (@TammySSchultz) is a professor at the Marine Corps War College and a non-resident senior fellow at the Atlantic Council. Schultz’s views do not reflect those of the Department of Defense or the Marine Corps.

A senior Marine Corps officer asked us recently, “Does Congress think the entire military is infested with extremists?” One of us is a proud Marine veteran and the other has spent her life developing national security policy, so it was embarrassing and upsetting for both of us to see veterans and active-duty forces among the mob attacking the Capitol.

As a member of the House Armed Services Committee and as a leading defense scholar, we are committed to eradicating extremists in our military. But in truth, we don’t believe vast numbers of our men and women in uniform are playing militia in their spare time.

But there’s a more insidious infection of extremism in the ranks, and it shows in the shockingly high percentage of troops who are refusing to take the COVID-19 vaccine—as many as one third of service members have opted out. These troops may not be co-opted by domestic terrorists, but they are clearly influenced by conspiracy theorists online and they just don’t trust basic science. That is dangerous for U.S. national security. In an increasingly complex digital world, we need our troops to guard against disinformation, trust the data, and believe in science because it is increasingly vital on the battlefield.

It was just over a year ago that COVID-19 sickened a quarter of the crew aboard the USS Theodore Roosevelt and ultimately led to the resignation of the Secretary of the Navy. Neither Russia nor China, our greatest contemporary adversaries, have ever taken out a U.S. aircraft carrier. But COVID did. Two more Navy ships were sidelined with outbreaks in the last month.

As of March 15, 2021, almost 260,000 Department of Defense personnel have developed COVID-19. With several more virulent strains racing across the globe, those numbers will likely increase.

U.S. troops’ crisis of confidence in the vaccine is potentially a watershed moment in warfare: For the first time ever, online disinformation is directly threatening the United States military’s readiness. Psychosocial operations are not new, but the use of disinformation online is far more effective because it can be accurately targeted against service members and their families at scale. While we acknowledge that it’s not just the troops who are susceptible to online manipulation, it’s a particularly big problem for our military and therefore must be stopped in the name of national security.

If we allow disinformation to cloud the judgement of service members and erode their trust in science, we will not be ready for the next fight. Russia and China know this. They have online campaigns to sow doubt in our vaccines.

This is not the first time a pandemic has jeopardized military readiness and cost American lives. The 1918-19 flu pandemic killed more U.S. troops than any single battled against the German Army in World War I. During the Meuse-Argonne offensive, Americans had to reroute supplies intended for the front lines to treat outbreaks. Arguably, the pandemic also increased the war’s duration, causing further loss of life.

Today, many service members share the same concerns as vaccine doubters in the general public: They question how quickly the vaccine was produced or cite conspiracy theories running rampant on social media about potential side effects. Some know the terrible history of the Tuskegee Experiments. But the stakes are much higher than doubts among the general public.

If we cannot convince our armed forces to believe in the science that produced the coronavirus vaccine, we’re in for a dangerous ride in the future. Congress’ bipartisan Future of Defense Task Force recently warned in its final report that emerging science and technology will define the battles of the future—and determine who wins them.

The Congressional report reached the conclusion that China will surpass us in military technology and capability if we do not change course. From quickly adopting advanced technologies from the private sector to investing more in basic scientific research and STEM education, winning on the battlefield will depend on excelling in the lab.

What we didn’t consider just a few months ago is that investing in science might not be enough if our troops don’t believe in it.

As Secretary Austin and the service chiefs follow through on their commitment to end extremism in the ranks, they need to take a hard look at this “everyday extremism” online that is already infecting the force. Today it threatens to sideline ships , but if our enemies exploit it further, the consequences could be far worse.

We need our troops to believe in science so they can use it in the fight, and we need a force that can defend itself against disinformation campaigns whether foreign or domestic. That will take much more than the “stand down”—essentially a focused period of training and education—that Secretary Austin has called for on extremism.

The Pentagon needs to develop a more aggressive campaign to counter Russian and Chinese disinformation, and also needs to determine how to insulate the force against domestic disinformation without infringing upon the Constitutional freedoms of all Americans. Make no mistake: this will be challenging. But it’s critical for the future of our security.

The first step is for our military leaders to simply convince their troops to get the vaccine. America will be safer and stronger once they do. 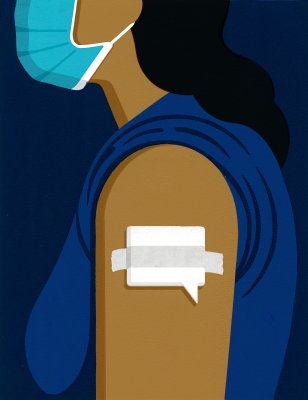 Moms Who Are Doctors Fight COVID-19 Misinformation Online
Next Up: Editor's Pick