“On September 14, 1953, Henry and Livia ‘Lucky’ Emory moved their family from Chatham County, North Carolina to Compton, California. The following occurred over 10 days in the family’s new home at 3011 Palmer Drive.”

This title sequence sets the scene for Amazon’s THEM, a new horror anthology series that explores terror in America from creator and executive producer Little Marvin and executive producer Lena Waithe (The Chi, Queen & Slim). Set against the backdrop of 1950s Los Angeles, the first season of THEM, subtitled Covenant, examines the impact of discriminatory housing practices like restrictive covenants and redlining that actively shut out minority communities from majority-white areas.

The season takes place during the Great Migration, the period of American history between 1916 and 1970 when roughly 6 million Black people relocated from the rural Southern United States in search of a better life. But the prejudice of the Jim Crow South didn’t exist in a vacuum, Little Marvin says, as evidenced by how Black people were treated in the LA neighborhood of East Compton.

“Here’s this place that has really come to be associated with Black culture. In the public perception, whether musically or pop culturally, that’s the image of [Compton] around the world,” he tells TIME. “But that hasn’t always been true—67 years ago, it was predominantly white. And not only that, but the folks in East Compton were virulently protective of their whiteness and of keeping Black folks out. It’s a place that was so emblematic of the postwar race and real estate story.”

While the show employs a variety of supernatural scares for its horror narrative, it also offers a haunting look at the very real terrors of racism—from housing discrimination to outright violence—that permeated mid-20th century America. Told through the experiences of Henry (Ashley Thomas), Lucky (Deborah Ayorinde) and their daughters, Ruby Lee (Shahadi Wright Joseph) and Gracie Jean (Melody Hurd), THEM: Covenant depicts the Emorys’ battle not only against the malevolent spirits threatening their family, but also their racist neighbors.

“I’d been thinking a lot about this country: where we’ve been, where we’re going and what we want to be. I knew I wanted to tell an American dream story, and there’s nothing more emblematic of the American dream, in my mind anyway, than the dream of homeownership. A home of one’s own is a point of great pride in this country, particularly for Black folks,” he tells TIME. “But in doing that, one has to go back to the roots of that postwar suburban ideal and investigate what lies beneath that dream and the nightmare that dream has been for Black folks.”

As the Black population in Los Angeles grew from 63,700 in 1940 to 763,000 in 1970, Camille Zubrinsky Charles, a professor of sociology and Africana studies at the University of Pennsylvania, says that white residents relied on prejudicial tactics like restrictive covenants to keep Black people out of communities.

“The idea was that there would be less prejudice and discrimination [against Black people] in California relative to what they were experiencing in the South. And in many ways, that was true. But not in all ways,” she says. “They faced quite a bit of resistance from whites in terms of integrating neighborhoods, labor markets and the like. Even if there weren’t restrictive covenants, for many Blacks, all-white communities were unattractive for fear of confronting prejudice and discrimination and racist behavior.”

When the Emorys first arrive at their new Los Angeles home, located in all-white area of East Compton, Lucky is dismayed to learn that the sale agreement contains a restrictive covenant barring the sale or rental of the home to “any persons whose blood is not entirely that of the Caucasian race,” specifically noting that “no persons of Negro blood or heritage will occupy the premises.”

Racially restrictive covenants evolved in response to both the Great Migration and the U.S. Supreme Court’s 1917 ruling that municipal segregation laws were unconstitutional, and required purchasers to agree not to sell their homes to non-white buyers. Racial covenants effectively maintained residential segregation without the use of explicit racial zoning. Their use became so common that by 1940, Black people were barred from 80% of the property in Los Angeles. Even after the Supreme Court deemed racial covenants legally unenforceable in 1948 and the Fair Housing Act of 1968 made them explicitly illegal, the real estate industry continued to privately use them as a form of racial steering until the U.S. Justice Department sued in 1977.

The Supreme Court’s 1948 ruling against restrictive covenants also did little to temper the racism that Black families were subjected to after moving into previously segregated neighborhoods. In THEM‘s 1953 setting, the Emorys’ realtor is quick to relay to Lucky that covenants are no longer legally enforceable. But that doesn’t mean much to their white neighbors, who immediately embark on a targeted harassment campaign to drive the Emorys out of their house.

“What’s been most eye opening to me over the course of this journey is really how codified race, but more specifically racism and segregation, have been into every level of this country—from federal to state to local,” Little Marvin says. “There’s truly been a cabal of forces, real estate agents, brokers, appraisers, lenders, bankers, homeowners associations and, in some cases, city planners and other developers, working in tandem over decades to keep certain folks in and push others, primarily folks of color, out.”

The fifth episode of THEM opens on a flashback that serves to demonstrate how businesses used predatory lending schemes to extort Black homebuyers. Redlining and similar practices were used to reject financial services to certain areas, often because of minority populations. As a result, lenders intentionally sabotaged the financial futures of entire neighborhoods. “You’re charging Negroes more than 20% [on mortgages]?” a banker on the show asks the real estate bigwigs behind the sale of the Emorys’ home. “There’s no way anyone can get out from under that.”

By the time discriminatory tactics like restrictive covenants, unfair home appraisals and redlining were outlawed, the damage was already done. A 2018 study by the National Community Reinvestment Coalition showed that nearly 75% of neighborhoods redlined on maps drawn between 1935 and 1939 by the federal Home Owners’ Loan Corp. continue to not only be low-to-moderate income, but are much more likely than other areas to comprise minority residents.

To quantify the lasting financial impact of redlining, according to a 2020 report by Redfin Real Estate, a typical homeowner in a neighborhood that was redlined for mortgage lending by the federal government has gained 52% less—or $212,023 less—in personal wealth generated by property value increases, than one in a greenlined neighborhood over the last 40 years.

“By and large, if you take the redlining maps that were used before the passage of fair housing legislation and overlay them on present-day maps of pretty much any major city in the U.S., and certainly any city that has any meaningful Black population, they look really similar in the sense that Blacks are still largely shut out of those neighborhoods that they were legally shut out of during that time period,” Charles says. “Property values, concentrated poverty, blight and all those kinds of things also map really well.”

Ultimately, Little Marvin says, THEM is intended to encourage viewers to consider how the issues created by these policies, from residential segregation to economic inequality, persist today.

“My hope is that the show can spark curiosity about the ways in which we live,” he says. “Segregation’s not some word from the distant past. It’s a word that’s part and parcel of the way that we continue to live. There’s a massive racial wealth gap in this country. And though there’s a web of systemic inequity that lends itself to that, one cannot divorce the disenfranchisement within the housing market from that gap.” 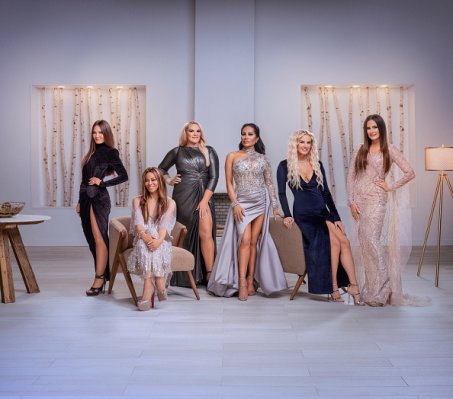 'The Real Housewives' Ultimate Beginners' Guide
Next Up: Editor's Pick