The Week Brazil Went Off the Rails

Jair Bolsonaro, Brazil's president, pauses while speaking during a news conference at the Planalto Palace in Brasilia, Brazil, on Wednesday, March 31, 2021. Commanders of Brazil's army, navy and air force were fired on Tuesday after Bolsonaro dismissed his defense chief as part of a broader cabinet restructuring.
Andressa Anholete/Bloomberg via Getty Images
Ideas
By Ian Bremmer
Bremmer is a foreign affairs columnist and editor-at-large at TIME. He is the president of Eurasia Group, a political-risk consultancy, and GZERO Media, a company dedicated to providing intelligent and engaging coverage of international affairs. He teaches applied geopolitics at Columbia University’s School of International and Public Affairs and his most recent book is The Power of Crisis

In the midst of a global pandemic, it’s difficult to determine which country is faring the absolute worst. But any short list at this point must include Brazil.

On Monday, embattled Brazilian President Jair Bolsonaro made the decision to upend his cabinet, replacing six ministers. Some of the departures weren’t surprising, like far-right Foreign Affairs Minister Ernesto Arujo, a close ally of Bolsonaro’s whose combative approach to international affairs has drawn fire given Brazil’s struggles to source vaccines from abroad. But other dismissals caught many off-guard, particularly that of Defense Minister Fernando Azevedo e Silva. Bolsonaro, a former Army captain who has spoken fondly about the country’s past military dictatorship (as well as authoritarian leaders more broadly), has recruited many active and retired generals to join his administration. Azevedo was one of them.

But since Bolsonaro took office in 2019, concern has been growing among military brass that Bolsonaro’s overtures could erode the military’s independence from politics beyond acceptable limits, a sentiment shared by the ousted Azevedo. On Tuesday, the heads of the Navy, Army and Air Force were dismissed by the President after they threatened to resign in protest over Bolsonaro’s push to have the armed forces defend his administration politically. For Bolsonaro’s military detractors, Bolsonaro’s increasing coziness with the military isn’t just a threat to the country’s ability to function as a proper democracy, but to the standing of the military itself. As Bolsonaro’s political fortunes continue to suffer, the worry is that he will take the military’s reputation down with him, a reputation they have spent decades rebuilding since the military junta ended in 1985.

The doomsday scenario for military leadership? Bolsonaro either loses the upcoming presidential election in 2022 or faces impeachment in the interim, decries either as illegitimate and tries to force the military to back him in his claims. The good news from this week is that top military leaders sent him a strong message: they will choose democracy over defending his administration at all costs.

Unfortunately for Brazil, there’s plenty more. Amidst Brazil’s worst financial crisis in decades, Bolsonaro has also been playing economic games. The latest revolves around the 2021 budget Brazil’s Congress managed to pass last week. To get it over the finished line and still remain under the spending cap, legislators earmarked billions more for discretionary spending by artificially deflating “mandatory” expenses like social welfare and unemployment so they could direct more funds to their preferred projects. For months now, Bolsonaro has been entertaining unorthodox proposals to fund different types of infrastructure projects from his advisors, as well as Regional Development Minister Rogerio Marinho. This was their latest attempt at doing so, and likely came with Bolsonaro’s unofficial blessing.

Less entertained by these proposals have been the technocratic members of Bolsonaro’s economic team, led by Economy Minister Paulo Guedes. While the legislation passed formally adheres to the spending cap, the reality is that the growth of mandatory expenses in the midst of a pandemic will cause total spending to skyrocket past the limits set under the constitution. And under Brazilian law, these economic advisors would be legally liable should that come to pass and they sign off on it. That led to rumblings that members of his economic team were preparing to use the threat of a government shutdown, and even their eventual resignation, to ensure Bolsonaro wouldn’t green-light the measures without significant changes.

A government shutdown or the enactment of a fake budget is unlikely at this point—leaving aside the recent political drama, Bolsonaro is politically liable should this legislation be approved as it stands. His predecessor, Dilma Rousseff, was impeached for not adhering to fiscal responsibility laws, and Bolsonaro opens himself up to the same fate by signing off on the legislation. It is unlikely Bolsonaro or his internal team understood that before the economic team began pushing back, and a supplementary bill is likely forthcoming to undo the worst of the damage. But Monday’s decision by Bolsonaro to appoint a centrist lawmaker with close ties to the House Speaker as his Government Minister (the person who manages the federal government’s relationship with legislators) shows he recognizes his need for more allies in Congress to stave off the worst.

And the worst is coming. Brazil’s daily death rate from Covid-19 is now tops in the world at over 3,100 (based on a seven-day average) and the country has just passed 325,000 Covid casualties overall. According to Reuters, ICU capacity has reached 90% or more in 15 of Brazil’s states (out of 26 overall). All that would be tragic enough, but the tragedy is compounded by Bolsonaro’s consistent minimizing of Covid-19 and past exhortations that the Brazilian people “stop whining.” Rather than fighting to protect the health of the Brazilian public, he has shown more interest fighting governors who have announced new lockdown measures as their public health systems collapse. Only recently has Bolsonaro embraced a mass vaccination program.

All of which means that Bolsonaro’s fortunes are at the mercy of the country’s Covid-19 trajectory. The situation for both Brazil and Bolsonaro will get worse over the next few weeks, but if the fever then breaks and the health situation starts to improve, Bolsonaro’s chances at reelection improve dramatically, which means less political drama like the kind we’ve seen over the last few days. But if the situation doesn’t improve meaningfully come early summer, Brazil will find itself in both a health crisis and a political crisis as Bolsonaro takes increasingly desperate measures to prop up his reelection bid and fend off a potential motion to impeach him. 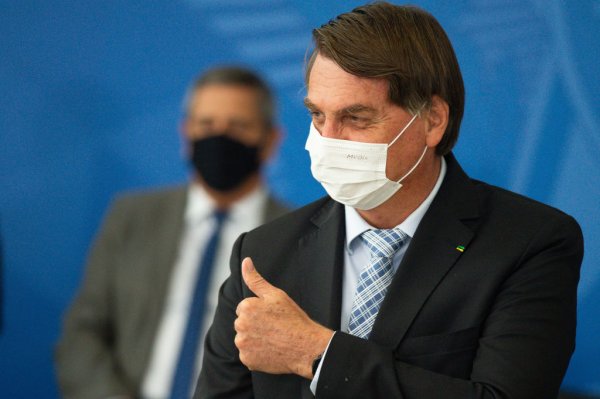 Why Brazil's Bolsonaro Changed Opinion on Vaccines
Next Up: Editor's Pick