Pedestrians walk past a Nike advertisement in Shanghai on March 26. China this week has pushed a campaign to boycott Western retailers after the U.S., U.K., Canada and the E.U. imposed sanctions over human-rights abuses against ethnic minority Uyghurs in Xinjiang.
Qilai Shen—Bloomberg/Getty Images
Ideas
By Ian Bremmer
Bremmer is a foreign affairs columnist and editor-at-large at TIME. He is the president of Eurasia Group, a political-risk consultancy, and GZERO Media, a company dedicated to providing intelligent and engaging coverage of international affairs. He teaches applied geopolitics at Columbia University’s School of International and Public Affairs and his most recent book is The Power of Crisis

No other country has done a better job of channeling the profit-maximizing drive of private corporations into geopolitical gains in recent years than communist China, the irony of which is lost on precisely no one.

The latest drama surrounds Nike, H&M and a slew of other Western clothing brands that voiced concern over reports of widespread human-rights abuses of the Muslim ethnic minority Uighurs by the Chinese government in Xinjiang. Multinationals work hard to avoid getting pulled into geopolitics, but reports of labor camps out of Xinjiang–which produces about 20% of the world’s cotton–made it much harder for them to continue doing so. Add in the increased fervor on social media that demands more corporations take stances on hot-button political issues and suddenly Western companies had a much harder time avoiding the trade-off of access vs. values.

Companies like Nike have no problem jumping into the political fray in the U.S. (See: the Colin Kaepernick ad campaign.) But how to respond when boycotts are threatened both from its customers in a free society and from those under an authoritarian government in a country that accounts for nearly a quarter of its global sales? Nike thought its measured responses were an acceptable balance, not drawing too much of Beijing’s ire while also acknowledging the concerns of Western consumers about possible labor camps. But then the U.S.–alongside Canada, the U.K. and the E.U.–decided on March 22 to slap sanctions on Chinese officials over the treatment of the Uighurs (the first time the U.K. and the E.U. have leveled human-rights-related sanctions against China in 30 years). At that point, Chinese social media dredged up Nike’s statement as proof of anti-Chinese sentiment, leading to calls for boycotts.

It’s unclear how successful these pressure campaigns will be, both in terms of companies’ bottom lines and of getting them to endorse the desired political line. The South China Morning Post is reporting that the boycott against Nike is “losing steam.” On the other hand, companies like Skechers have pushed back in recent weeks on claims of forced labor made by the Australian Strategic Policy Institute, an “alternative perspective” picked up by the state-sponsored China Daily. As Twitter can tell you, the most effective way of punishing someone is deplatforming them, which China opted to do with H&M, scrubbing its presence from e-commerce sites Alibaba and JD.com.

Will China do the same with Nike? Hard to say at this point, especially because Beijing will host the 2022 Winter Olympics, less than 12 months away. Already, some Republicans are making life difficult for the Biden Administration by demanding the U.S. boycott the Games; others are calling for more targeted forms of boycotts that allow U.S. athletes to compete but pressure Western companies to stay home. In the coming months, calls like that will only grow louder, and not just in the U.S.; the Winter Olympics heavily feature the countries most likely to speak out against human-rights abuses–the U.S., Canada, the Nordics and others. Even if a boycott doesn’t materialize, athletes have minds of their own, and the Olympics have historically been venues for public protests.

If you’re Beijing, the crux of the issue is this: there comes a point where pushing companies too hard risks their leaving altogether, which means losing whatever influence you have over them. Beijing must ask itself: Does it want some influence all over the world, or complete influence over just part of it? As globalization fractures further, both countries and corporations will be forced to make decisions they had been avoiding for decades. 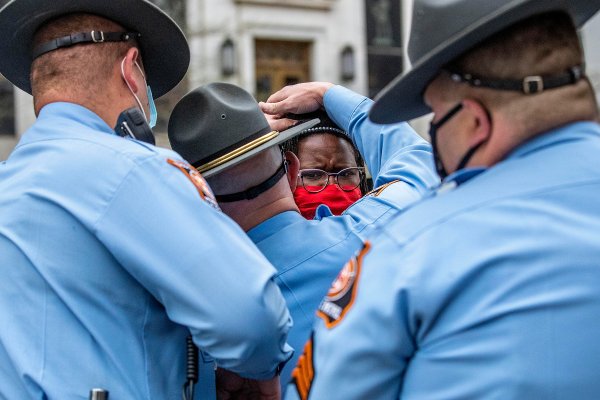