Before the Feb. 1 coup, Zarni Win* worked for a United Nations-funded committee that monitored a ceasefire between Myanmar’s junta and ethnic armed groups. Today, the 27-year-old from Yangon, the country’s largest city, is getting ready to enlist in one of those groups herself.

“Now is the time to start preparing to eliminate the terrorist military,” she tells TIME. “I am ready to join the armed revolution.”

Myanmar is veering dangerously toward all-out civil war as the military, known as the Tatmadaw, terrorizes the public, and attacks restive ethnic territories. The U.N. special envoy for Myanmar, Christine Schraner Burgener, warned on Mar. 31 that “a bloodbath is imminent.” In an online presentation cited by the Associated Press, she said civil war “at an unprecedented scale” was a possibility and spoke of Myanmar’s deterioration into a “failed state.”

Protesters in Myanmar have maintained a largely peaceful resistance to dictatorship since the coup ousted a democratically elected government led by Aung San Suu Kyi. Millions of people have taken to the streets, and hundreds of thousands of government workers have gone on strike. On March 25, Myanmar’s Civil Disobedience Movement was nominated for the 2022 Nobel Peace Prize—and just weeks ago, protesters were using creativity, humor and the arts to inspire solidarity and mock the junta.

Now, they feel compelled to take up arms against the junta’s brutality. Since the coup, soldiers and police have shot dead more than 560 people, including at least 43 children, and more than 2,600 remain in detention. Other detained people have been found dead with torture wounds. State forces have also exhumed and dragged away bodies and beaten people on the streets; on March 28, they burned a man alive.

Against this backdrop, the formation of a “federal army” among Myanmar’s many ethnic groups is said by ousted lawmakers to be imminent, driven by the growing numbers of people who have given up hope of foreign intervention or a nonviolent domestic solution.

“Now, people are starting to realize we cannot wait for anyone; we will just have to continue moving forward by ourselves,” says a national staff member with a U.N. agency, who spoke on the condition of anonymity as he is not authorized to talk to the media. “We can’t just keep sending our young people out there to their deaths without any proper self-defense mechanisms.”

To overthrow the generals, the country’s ethnic minorities and the majority Bamar people would have to effectively overcome decades of mistrust and learn how to fight together. Longstanding promises of self-determination for minorities will also have to be honored if anti-coup forces manage to defeat the Tatmadaw. Increasingly, these are the bottom lines in Myanmar’s struggle.

The mother of Aung Zay Min, a 20-year-old who was shot and killed by security forces, mourns over his body at his funeral in Dala township, outside Yangon, Myanmar, on March 27, 2021.
Getty Images

Ethnic solidarity in Myanmar’s struggle against the junta

The Bamar comprise roughly 68% of Myanmar’s population—with the rest made up of more than 100 ethnic groups—and have dominated politics and the military since the country’s independence in 1948. Almost from the beginning various minorities took up arms against the Bamar, seeking self-determination under a federal union promised them at independence. The Tatmadaw responded by killing, raping, and committing other gross human rights violations against civilians.

Successive governments have cast the conflicts in ethnic areas as threats to national unity. When Aung San Suu Kyi, who is Bamar, came to power following democratic elections in 2015, she pledged to prioritize peace with ethnic armed groups and advance a federal democracy. But during her five-year term, she succeeded at neither.

As her government backed the Tatmadaw’s actions and imposed restrictions on aid and Internet access in conflict-affected areas, the Bamar public largely remained loyal to her and silent to the plight of minorities. In fact, protesting the Tatmadaw’s human rights abuses against the non-Bamar population became unpopular and controversial, especially if it meant taking a stand against Aung San Suu Kyi. The public made little effort to learn about minorities, either during her tenure of before. Doing so was difficult, in any case. Under the previous junta, which ruled from 1962 to 2011, there was little access to information outside of military propaganda.

But the Tatmadaw’s use of violence across the entire country since the coup has sparked a flood of apologies from Bamar for prior attitudes and there has been an unprecedented outpouring of ethnic solidarity and appreciation for ethnic armed organizations, as people come together against a common enemy. In a major shift, Bamar youth, like Zarni Win, are traveling to border areas to join some of the largest ethnic armed groups.

The Committee Representing the Pyidaungsu Hluttaw (CRPH), a group of ousted lawmakers attempting to run a parallel government to the junta, has helped pave the way for these changes. On March 17, the CRPH released a statement announcing the public’s right to self-defense. Two days later, they removed the designations of “terrorist group” and “unlawful association” from all ethnic armed organizations in the country, allowing for legal support of, and enlistment in, these groups.

“Now is the right time for armed rebellion, because the majority Bamar people have faced the military’s brutal actions against protesters,” says Seng Zin,* an ethnic Kachin youth. “Before, they didn’t care about us, and sometimes even supported the Tatmadaw, but now, they’ve learned.”

Not everyone is in favor of the apparent drift to civil war. Khun Thomas, an ethnic Karenni activist, fears that taking up arms will only worsen the situation. “Armed revolution would only shed blood and result in much damage,” he tells TIME, calling for a continuation of nonviolent resistance. But such views have been increasingly pushed to the periphery—especially since March 27, when state forces killed at least 117 people in a single day.

Khin Sandar Nyunt, an ethnographer who has researched nonviolent protest in Myanmar, says the nation’s bloody past must be taken into account when evaluating the tactics of passive resistance. In 1988 and 2007, the generals violently cracked down on pro-democracy uprisings. The bloodshed did not stop during Aung San Suu Kyi’s term: in 2017, the Tatmadaw killed at least 6,700 Rohingya people, committing mass rape and arson.

“I believe in a nonviolent movement, but at the same time, in the Myanmar context, we need to be aware of the history and characteristics of the brutal military armed forces,” she tells TIME. “We are rethinking again: ‘Will only nonviolence be effective?’ The armed forces we are facing now are really terrorists.”

Smoke rises from tires burning near a barricade erected by protesters to stop government forces from crossing a bridge in Yangon on March 16, 2021.
Getty Images

Until now, much of the battleground for Myanmar’s struggle against the junta has been in its large cities, like Yangon and Mandalay. Bhone Kyaw,* 22, is among thousands of “frontliners” who have used their familiarity with the streets to launch guerrilla-style attacks on police and soldiers. Wearing helmets, gas masks and shields, they have been hurling homemade projectiles from behind makeshift barriers made of sandbags and debris.

But these days, Bhone Kyaw, who lives in Yangon, says the risks are becoming unbearable and he has stopped going out. “[Police and soldiers] use real bullets and attack brutally,” he tells TIME. He is also worried that the strangers he sees on the streets could be informers. “I have shifted my housing to avoid detection, and I am trying to be strong.”

Clashes, however, are rapidly escalating on the country’s borderlands—even in areas that have not seen bloodshed for years—as the push against the junta converges with decades-long struggles for self-determination. More than 20 ethnic armed organizations are based in these areas, with their own territories and administrative structures. Collectively, they have troops numbering in the tens of thousands.

On Mar. 29, the General Strike Committee of Nationalities, one of the country’s largest protest groups, released an open letter to ethnic armed organizations, calling on them to protect unarmed civilians with “collective leadership.”

In a Mar. 30 interview with Reuters, the CRPH’s international envoy confirmed plans for the announcement of a “federal army” to protect the people and ensure the establishment of a federal democracy. He said that if the international community failed to take action, civil war was “unavoidable” and a federal army was “the way we achieve democracy and freedom.” A day later, the CRPH released a federal democracy charter and announced the abolishment of the military-drafted constitution that was in place since 2008.

Representatives from the Karen National Union and Kachin Independence Organization, two of the country’s largest ethnic armed organizations, have voiced their support for the establishment of a federal army, while other formidable armed groups have threatened to take action if junta forces continue to kill protesters.

On the southeastern border with Thailand, fighting between the Karen National Union (KNU) and the Tatmadaw has exploded. Since the KNU’s armed wing captured a Tatmadaw base on Mar. 27, Tatmadaw airstrikes and attacks on areas under KNU control have displaced more than 15,000 civilians. On Mar. 30, the KNU announced that it had “no options left” but to confront the junta’s threats in order to defend its territory, the Karen people, and their right to self-determination.

“Now is the time for a national-level armed resistance” says Karen activist Naw Esther Chit. She warns of “many casualties” but says: “We don’t have another viable option.”

A fragile stasis is also falling apart on Myanmar’s northeastern border with China, where the Kachin Independence Organization (KIO) is based. After more than two years of relative quiet, the KIO’s armed wing, the Kachin Independence Army (KIA), and the Tatmadaw have been clashing daily since Mar. 11, with local media reporting 28 Tatmadaw casualties on Mar. 28.

After the coup destroyed her plans to apply to international graduate degree programs, Seng Zin* recently followed in the footsteps of her father and brother and enlisted in the KIA.

“I wanted to be a professional in the education sector. In my township, a lot of people couldn’t attend school and spent their whole lives fleeing [conflict] and working for their survival,” says the 20-year-old. “I wanted to use my education to serve them, but now, my hopes and dreams are gone.”

She says she will be fighting not only for the Kachin, but to end dictatorship and advance a new constitution based on federalism. Although wary of fully trusting Bamar people, she hopes that recent changes in Bamar perspectives can be channeled for the benefit of all and welcomes their participation in the struggle.

The ethnographer Khin Sandar Nyunt is meanwhile optimistic that the national upheaval can result in lasting ethnic reconciliation and political change. “One day, we will completely defeat the military junta,” she says. “This will be a completely new and golden political future.”

The U.N. worker also sees brighter days ahead. “Every now and then, I catch myself smiling because once this is over, we can actually rebuild a nation that is more socially conscious,” he says.

“When we win the revolution, we are going to have a nation that is truly, federally democratic.”

*Zarni Win, Bhone Kyaw and Seng Zin asked TIME to use pseudonyms, out of consideration for their safety. 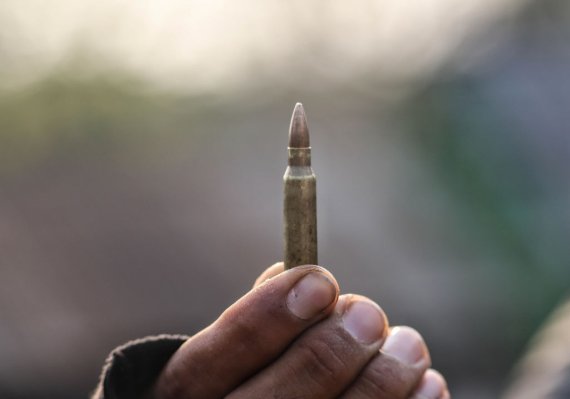 'Risking Everything.' Myanmar Activist Talks About Her Fight
Next Up: Editor's Pick