How the Giant Boat Blocking the Suez Canal Was Freed: Dredgers, Tugboats, and a Full Moon

The congregation of tugboats and dredgers that freed a skyscraper-sized container ship from Egypt’s Suez Canal on Monday had help from an extremely foreign body over the weekend: The moon.

The recovery vessels took advantage of high spring tides around the full moon on Sunday to free the Ever Given, which had blocked Egypt’s Suez Canal for almost a week. Its partial refloating just before dawn on Monday drew cheers and foghorn blasts from the bridges of other vessels caught in the bi-directional snarl that had held up hundreds of ships and billions of dollars worth of cargo each day since March 23.

Images on shipping trackers and reports from on the ground gave credence to the Suez Canal Authority’s (SCA’s) Monday afternoon announcement that the ship had been “fully refloated”, allowing for “restoration of the vessel’s direction so it is positioned in the middle of the navigable waterway”. As of Thursday evening, the Ever Given was headed for Great Bitter Lake, a wider stretch of water where the vessel will be examined according to its Taiwanese operator Evergreen Marine.

Only hours after tug boats had initially wrenched the stern free, some news outlets reported that strong winds had blown it back to its stuck position across the 205-meter southern section of the canal. Although the SCA confirmed the Ever Given had been fully refloated soon after, the incident underscored the precariousness of the operation and will likely prompt further scrutiny of the vessel’s apparent vulnerability to strong winds.

Here’s what to know about the freeing of the Ever Given:

Who refloated the vessel and how was it freed?

It took 14 tugboats conducting pulling maneuvers from three directions to achieve, according to the SCA. Their task was made easier by dredgers that worked over the weekend to dislodge the stranded vessel, shifting some 27,000 metric tons of sand to a depth of 60 feet. The tides helped too: Suez Canal forecasts showed that the Ever Given vessel was partially refloated as spring high tide levels peaked. After Tuesday, high tide heights will begin to decline again.

Both domestic and international recovery teams helped out. On Monday, Egypt’s authoritarian president Abdel Fattah el-Sisi thanked “every loyal Egyptian who contributed” to refloating the ship. “Today the Egyptians succeeded in ending the crisis of the grounded ship in the Suez Canal, despite massive technical complications which engulfed this operation,” he wrote in an Arabic-language tweet.

But international teams were also involved. Dutch dredging and heavy-lift firm Boskalis dispatched a team to assist the vessel as early as Wednesday, according to shipping publication Trade Winds. “Don’t cheer too soon,” Boskalis CEO Peter Berdowski cautioned amid celebrations as the Ever Given was partially refloated on Monday morning, warning that the hardest part was still to come. But later that day, he confirmed the operation had been a success. “We pulled it off!” Berdowski said in a later statement. “I am excited to announce that our team of experts, working in close collaboration with the Suez Canal Authority, successfully refloated the Ever Given …thereby making free passage through the Suez Canal possible again.”

How did the ship get stuck in the first place?

It’s still not clear. Initial reports from the SCA stated that Ever Given lost control amid strong winds and sandstorms. Evergreen Marine, its operator, said the same: that it “was suspected of being hit by a sudden strong wind.” Meanwhile, vessel management firm Bernhard Schulte Shipmanagement said Thursday that initial investigations ruled out any mechanical or engine failure as a cause of the grounding.

But on Saturday, the chairman of the SCA Osama Rabie offered a contradictory version of events. “Weather factors were not the main reasons for the ship’s grounding,” he said, and “technical or human errors” may have played a role in the accident.

How much did the blockage end up costing?

It’s difficult to determine because delays affect the different goods in different ways. Still, the costs would have been considerable: about 12% of global trade passes through the Suez Canal. The most vulnerable were already feeling the pinch. Over the weekend, Syria’s oil ministry announced that it had begun rationing the distribution of fuel in the country amid concerns that oil shipments could be delayed. The war-torn country where some 80% of the population lives in poverty is already suffering from fuel shortages, and the government of dictator Bashar al-Assad has already raised fuel prices three times this year, the AP reports.

For Egypt, the Ever Given’s refloating must have come as a relief. The canal is a vital source of foreign revenue and its blockage was costing some $14-$15 million a day, SCA’s chairman Rabie said.

There would have been reputational concerns too. As early as last Thursday, some large ships had begun to divert away from Suez and towards the African cape, even though that route can take an additional two weeks. But for container ships traveling between Asia and the U.S. East Coast, there is another option. The Suez Canal began to gain market share from the Panama Canal as manufacturing centers gradually moved south from northeast Asia to southern China and Southeast Asia. But a longer-term impediment to transit through the canal could have reversed that trend.

The question of whether Ever Given—and container ships of similar magnitude—have a propensity to lose control during strong winds is likely to attract further scrutiny.

Insurers were already wary of the risks posed by mega-ships carrying expensive cargo, experts say. Data from the United Nations Conference on Trade and Development (UNCTAD) shows that the average size of the largest container ship that ports manage has more than doubled over the past 15 years. The Ever Given is the same size as the largest bulk container ships that transport commodities like iron ore. But the ship—which was reportedly involved in a separate accident attributed to high winds in 2019—carries a far more valuable cargo.

Some 3000 containers were lost in the North Pacific in the first two months of 2021. Last December, 1,900 “boxes” were lost in a single incident, including some containing dangerous goods, says Diane Gilpin, founder of the U.K.-based Smart Green Shipping Alliance.

But it is not only the possibility of accidents or loss of cargo that is cause for concern with massive container ships, says Jan Hoffman, chief of UNCTAD’s trade logistics branch. Although mega-ships still make savings in terms of CO2 per tonne mile on the sea-leg of their journeys, “in the ports and hinterlands there is lots of additional expenditure necessary to cope with the higher peak demand,” he says. “We have reached dis-economies of scale for the total logistics chain.”

The original version of this story misstated the size of the largest container ships that ports managed in the first quarter of 2006 and the fourth of 2020. It was 9,380 Twenty-foot Equivalent Units (TEU) and 23,963 TEU respectfully, not 100 TEU and 225 TEU. 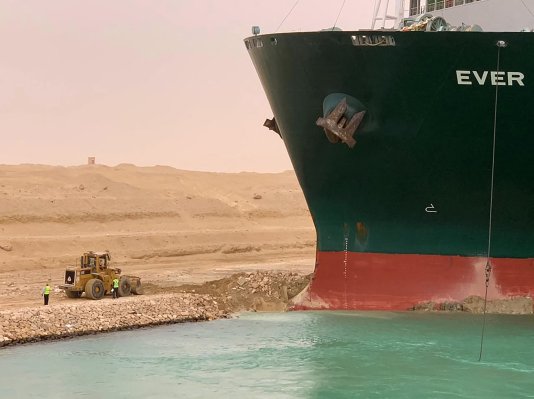 What the Boat Stuck in the Suez Canal Is Costing the World
Next Up: Editor's Pick