Trump Is Gone, But He’s Still Energizing The Resistance

Marine One flies by the Washington Monument as President Donald Trump departs Washington on the morning of the 59th Presidential Inauguration ceremonies on Jan. 20, 2021.
Kent Nishimura—Los Angeles Times/Getty Images
By Philip Elliott

Julia Larkin stood under the glass roof of the Javits Center well into the morning. As a Brooklyn Democrat, she had high expectations for what Election Day 2016 would bring for Hillary Clinton. But as evening turned into night and into sunrise, Larkin started to ask the question so many Clinton supporters did that day. “How the hell could Donald Trump win this?” Larkin recalls thinking.

Well, it turned out, Trump could. It was close and came down to narrow margins in three Midwest states. But math is math, and it’s a stubborn thing.

Rather than slink back into the wings, Larkin and hundreds of thousands of activists like her shifted their roles. What emerged from the rage, tears and profanity of Clinton’s loss became collectively known as The Resistance, and it reshaped politics for the four years Trump used 1600 Pennsylvania Avenue as his operating base. “Watching those big screens turn red, I realized we have so much more work to do,” says Larkin, a former head of American University’s chapter of College Democrats and still a self-described activist in her junior year at the school. “That gave me and other people the boost of energy we needed.”

What Larkin helped fuel was perhaps the most pan-identity social and political Democratic movement since the Civil Rights era and it yielded some of the most efficient upheaval of stasis in this country ever. In a time period shorter than the entire Confederacy, Democrats flipped the House, the Senate and the White House into Democratic hands and created the pragmatic coalition that put Joe Biden in the Oval Office.

American politics has no shortage of outside groups funneling money into races. Billionaires on both sides play in the electoral sandbox as something of a hobby. But Clinton’s loss in 2016 fundamentally changed how rank-and-file liberals participated. Activism’s tent expanded in all directions, a shift that political scientists will study for a generation. What used to be sporadic voters became reliable volunteers, and the steady activists became hyper-charged organizers. The grassroots, it turns out, still has power. “2016 was what we needed as a slap in the face,” Larkin says.

Now Trump is out of Washington, at least temporarily relegated to crashing weddings at his private club and nursing grievances as a tuxedoed toast master. What does that mean for this movement? It’s tough to resist something that’s already been ousted, right?

In conversations with progressive leaders, it’s clear they believe Trump remains as potent a boogeyman as ever. Institutional Washington is Democratic with an upper-case D, even if the still-new Administration of Joe Biden is forming at a slower pace than its forerunners. The 50-50 Senate remains locked in an uncertain fight and the odds don’t look good for big changes. But the retribution at the state level for Democrats’ gains seems to be coming fast; just look at the voting-rights restrictions that became law last week in Georgia.

The states are where The Resistance is now shifting its focus. At least for the next year, there’s little that liberal activists can do to really tinker with the abacus in Washington; the seats here are decided until November of 2022. But there are elections in Virginia this year. The Democrats’ trifecta of power — its control of the state House, Senate and governorship is its first since 1994 — in that narrowly blue state is in play, and liberal groups are already tripping over each other to brand the potential Republican nominees as Trump 2.0.

“He’s gone, but he’s not gone,” says Democratic Party of Virginia Chair Susan Swecker. “We are still running against Trump because every single one of the statewide candidates who is going to get nominated on their side is a proud follower of Donald Trump.”

Earlier today, Swing Left, one of the myriad of liberal grassroots groups to form after 2016, announced plans to mobilize its forces for Virginia again. It is what will essentially be a test-run for their 2022 strategy, both in rhetoric and in tactics. The group has some success in the state to suggest it shouldn’t be written-off as a fringe effort. In 2019, the last time Virginia had state-office races, Swing Left targeted 20 races in Virginia and won 14 of them. It flipped six seats in the state House and two in the state Senate from red to blue, helping secure a Democratic majority in both. And while the almost $900,000 Swing Left members raised for Virginia candidates that year is nothing to sneeze at, its real power came from the 88,000 doors knocked by volunteers, 39,000 calls made and almost 230,000 get-out-the-vote letters written.

I remember watching Trump’s first official State of the Union with a #resist group in Los Angeles. I simultaneously marvelled at their commitment and questioned their movement’s durability. Later that year, Democrats — with a big assist from female voters — swung the U.S. House into Democratic control. Two years later, Biden rose to the White House and Democrats fought to a tie in the Senate. And while the House majority is fragile and the Senate tilts blue based on Vice President Kamala Harris’ single, tie-breaking vote, the intensity of D.C. ‘s blue hue still depends on these outside groups’ potency to move a few thousand votes here and there.

These group’s leaders know this. They also know no one moves the needle like Trump at a time when Democrats can afford complacency the least.

“What we saw in 2009 was a pretty steep drop-off in enthusiasm from volunteers and donors. The high of winning the presidency for Barack Obama and the Democratic majority in Congress was huge. In some ways, it was like, OK, our job’s done,” says Tori Taylor, the executive director of Swing Left. “As we know, we saw how fragile those majorities ended up being and how little time we actually ended up having.” Republicans came back to power in the House with the Tea Party wave and came darned close to doing the same in the Senate in their message of running against Obama.

This time, the Democrats are taking from that playbook and running against Trump, even though he’s not on the ballot. The last four years, after all, aren’t far from memory — especially for the die-hard Clinton supporters who are still waiting to crash through the glass ceiling of the Javits Center. 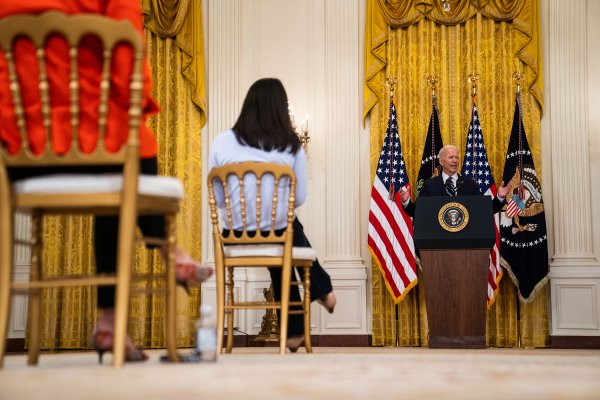 Joe Biden Proved a Press Conference Doesn’t Have to Be a Spectacle
Next Up: Editor's Pick