A version of this article also appeared in the It’s Not Just You newsletter. Sign up here to receive a new edition every Sunday.

We humans are notoriously unreliable, superstitious narrators, always scanning the horizon for signs that validate what our hearts have already told us. Take me, for example. I keep telling people I was vaccinated at Hogwarts’ Manhattan campus under the waxing moon (it was a gibbous moon to be exact). How auspicious!

Ok, so my COVID-vax site was really The City College of New York. But stepping through those dramatic gothic gates to receive a blessing of science was wondrous, maybe a little spiritual. There was even a rainbow-y halo around that big moon, another lucky omen if you’re hungry for such things.

The entrance to The City College of New York, Manhattan campus which is serving as a coronavirus vaccination site.
Photograph by Susanna Schrobsdorff

I started digging for lore on moons and rainbows and learned that the physics of rainbows doesn’t detract from the mythical place they have in our cultural imaginations. In fact the opposite.

If you’re new to It’s Not Just You, subscribe here to receive a fresh edition every Sunday.

There’s inherent poetry to what happens when rain and sun collide. For example, each one of the billions of droplets in a rainbow conveys a different color when the sun refracts through it. And even if two people are standing next to each other, they are looking at different rainbows comprised of a different set of droplets. (Yes, we each have our own rainbows.)

Just ask Steven Businger, professor and chair of Atmospheric Sciences Department at University of Hawai’i in Manoa. He’s a co-creator of RainbowChase, an app that alerts users when nearby conditions are conducive to rainbow sightings. After decades in a state where mind-blowing rainbows are a daily occurrence, Businger still pulls over to take photos of them. “I’m completely spiritually gobsmacked by rainbows,” he says.

Most of Businger’s research has to do with hazardous weather, storm evolution, and forecasting. But in this pandemic year, he went on a bit of a glorious tangent to look at the science and mythology behind Hawaii’s prolific rainbows, which he posits are the most spectacular on Earth thanks to the state’s unique geography and weather patterns.

The idea of the rainbow as a source of life, or a bridge to another plane, is embedded in cultural traditions across the world, from the ancient Greek rainbow goddess Iris to Aboriginal people of the desert’s stories of the Rainbow Serpent and the mythical Norse rainbow bridge to the land of the gods, Bifrost.

In Businger’s March 11 article, “The Secrets of the Best Rainbows on Earth,” he points out that there are more than a dozen different words for rainbow in Hawaiian. There are Earth-clinging rainbows (uakoko), standing rainbow shafts (kāhili), and barely visible rainbows (punakea).

There is also something called a moonbow, or lunar rainbow, a rare event in which the moon refracts light through water droplets in the air creating a kind of rainbow, similar to what the sun does.

But alas, Businger tells me that the colors I saw in the halo around the moon at City College were in fact, not a moonbow which, like a rainbow, is only seen when the moon or sun is behind you.

What I likely saw on my way to get my coronavirus vaccine was a gorgeous lunar corona. And with that, I rest my mystical case.

A vertical rainbow, or Kāhili over Hawaii
Photograph courtesy of Steven Businger/University of Hawai'i in Manoa

Unfolded by rainbows are the faces of the flowers.

If you’re new to It’s Not Just You, SUBSCRIBE HERE to receive an essay every Sunday. And write to me at: Susanna@time.com

you don’t have to be everything Poems for Girls Becoming Themselves is a gift-worthy collection of 68 poems organized by emotion including works by Amanda Gorman, Sharon Olds, and Margaret Atwood.

―Margaret Atwood, Flying Inside Your Own Body

EMPATHY FOR CHANGE is a new guide to cultivating empathy in thought and action, and why it’s an essential 21st-century skill. Author and former White House entrepreneur-in-residence Amy J. Wilson writes:

The Antidote to Pandemic Loneliness

Denise, a 37-year-old woman from Phoenix, wrote Pandemic of Love last May that being quarantined made her realize how alone she was. She began to wonder if anyone would even notice if she disappeared. POL Founder Shelly Tygielski called her to check-in. Then Tygielski asked her Instagram followers to “FLOOD a special email address with letters for Denise telling her she matters, that she is important, beautiful, and SEEN.” Denise has since received more than 3,000 emails via lovelettersfordenise@gmail.com. She writes:

Story and images courtesy of Shelly Tygielski, founder of Pandemic of Love, a grassroots organization that matches volunteers, donors, and those in need.

Meet PEACHES submitted by MARY, who didn’t intend to get a puppy, but now isn’t sure she would have made it through these surreal times without her.

Send comfort creature photos and comments to: Susanna@time.com
Did someone forward you this newsletter? SUBSCRIBE to It’s Not Just You here. 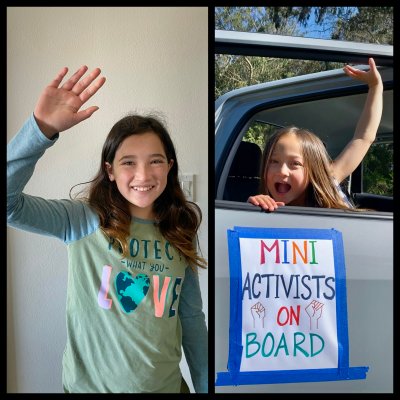 Be Bold, Be Proud, Speak Up: Raising Asian American Daughters Now
Next Up: Editor's Pick