Workers remove a security fence that was placed around the White House in response to the Jan. 6 riots at the United States Capitol on March 24, 2021.
Bryan Dozier—Shutterstock
By Philip Elliott

Washington isn’t a city particularly known for its rationality. We do overreaction better than most, and that talent is rivaled only by underreaction. Passions fuel far too much public policy, personalities dictate what is possible and personal relationships often triumph over pragmatism. It’s something I usually bemoan and curse under my breath — or, increasingly, in this newsletter.

So you’ll forgive a moment of indulgent irrationality and some merriment. For, you see, the fencing around the U.S. Capitol has come down.

Well, not all of it. And the barriers that remain don’t have an expiration date and may never get one. But at least some of the garish barricades that went up in response to the deadly failed insurrection on Capitol Hill on Jan. 6 have been dismantled. The razor-wire on top of what remains is gone, too. And in a city sprinkled with symbols — the monuments, the memorials, the street names and the performative acts of lawmakers — the very need for the fence in the first place is a reminder of Jonathan Swift’s warning that a lie can go around the world while the truth is lacing up its boots. (Before you, loyal readers, write in, I know it’s commonly attributed to Mark Twain. But that’s wrong. Americans aren’t the only clever writers.)

Capitol aides last week started telling reporters that plans were afoot to shrink the security zone around the marble edifice. Capitol Police and the Architect of the Capitol — the presidentially-appointed and Senate-confirmed landlord for the Capitol, its office and support buildings and the Supreme Court — have been ready to roll back some of the low-tech fencing that had disrupted the tight-knight community that lives in the neighborhood and routinely use the parks on the Capitol complex as they would any other open space.

Lawmakers of both parties have been nervous about the message the fencing sends about a walled-off Congress. The area has at times felt like a war zone, with uniformed military members manning checkpoints. And even the fence’s defenders aren’t loving the price tag of $2 million per week for the added barricades. The top Republican on the Senate’s Rules Committee estimates the National Guard deployments in the area have topped $500 million since Jan. 6.

The fencing’s partial retreat this week isn’t the final word on what permanent security will look like on Capitol Hill, a park-like office complex that, until January, was almost always accessible to any member of the public by foot. It’s one of the most transparent pieces of federal government anywhere, an embodiment that anyone who cares to can petition their government directly. The results can often be messy and occasionally contentious; the protests during confirmation hearings for Supreme Court nominees Brett Kavanaugh and Amy Coney Barrett were some of the toughest of late. The impeachment trials of former President Donald Trump came with added security that kept much of the demonstrations at bay.

Still, Capitol Hill is a space where — at least during non-pandemic times — reporters can wander and often run into lawmakers taking a stroll with a spouse, going for a jog with an aide or sharing breakfast inside one of the windowless cafeterias. It’s typically easy to navigate and, as far as government buildings go, a beautiful campus, even if the tunnels can be confusing.

The fact that the public’s access to their Capitol was restricted during a pandemic was unfortunate. The fact that it was overrun by a mob inspired by the false belief that the 2020 election was stolen from Trump was tragic. But with some of that irrational rage receding, so too is the fencing. In that, irrational relief finds a footing. 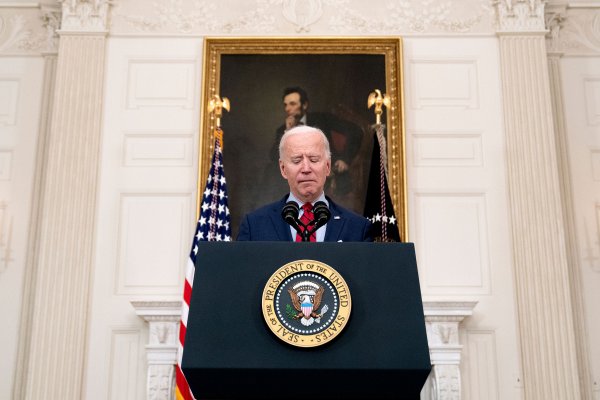 Joe Biden Is Unmatched as America’s Grief Counselor
Next Up: Editor's Pick